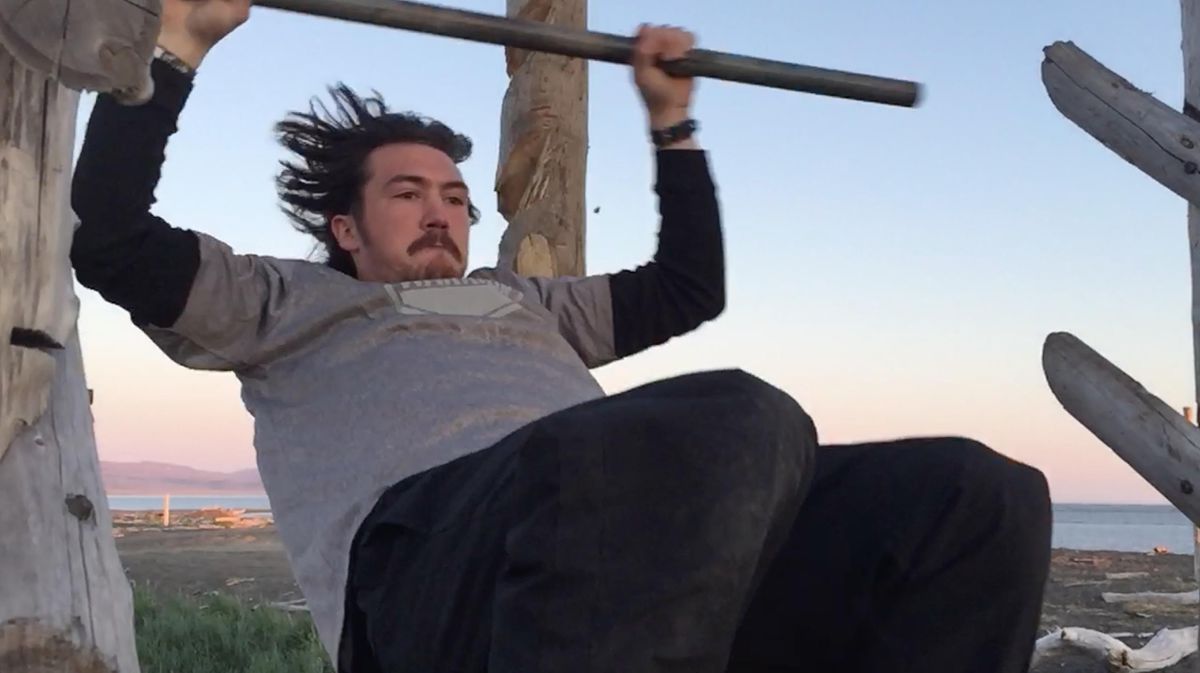 Nick Hanson of Unalakleet trains this summer on the obstacle course he and friends built in the Western Alaska coastal village to prepare for “American Ninja Warrior.” (Photos courtesy of Isaiah Woods)

Nick Hanson of Unalakleet trains this summer on the obstacle course he and friends built in the Western Alaska coastal village to prepare for “American Ninja Warrior.” (Photos courtesy of Isaiah Woods)

BETHEL – Under an I-beam gripping his way along an inch-wide lip, Unalakleet's Nick Hanson reached deep to hang on and move through the pain.

The challenge was the most grueling of those he faced on the June 1 season premiere of "American Ninja Warrior." The NBC competition show with an ultra obstacle course drew more than 6 million viewers and was the most-watched network program of the night.

"It's killer. You are hanging on by the tips of your fingers," Hanson said a few days after watching the premiere at his parents' Peace on Earth pizza place in Unalakleet. Everyone else was so on edge that he was shaking, too, even though he knew the ending: He made it into the next round. "I really just kinda used 100 percent willpower to get through that one."

Hanson, 28, has built his own training obstacle course in his Western Alaska coastal village of Unalakleet, home to fewer than 700 people. There's no rock climbing out there.

Still, in the village, there are plenty of ways to exercise, and Hanson is all about fitness. He lives ultrahealthy — no drinking, no tobacco. He's setting an example by intention, but he's also hard-wired for clean living in a harsh place.

"I don't even drink soda. That's how far I take it," Hanson said.

For "American Ninja," he drew on tests of self that others couldn't from his own experiences in the Arctic Winter Games and the World Eskimo-Indian Olympics.

"I relate that obstacle to my knuckle hop in WEIO," Hanson said. Athletes in a fisted pushup position hop along their knuckles and toes for as long as they can stand it on a hardwood floor, shredding their hands along the way.

"It's really like one more hop, one more hop when you get to the end. You're dying. You're trying to push your body to the next level," Hanson said. "That experience in knuckle hop really helped me dig deep on the I-beam."

Earlier this year, Hanson, who is 5 foot, 10 inches and 170 pounds, won a gold ulu in the 2-foot high kick at the Arctic Winter Games in Greenland, a bronze in the knuckle hop and a number of fair play awards for his sportsmanship. His world record in the scissor broad jump, which requires four hops and steps without a loss of balance, still holds at 36 feet, 7 inches.

"Arctic Winter Games: Training grounds for the next American Ninja Warrior!" the games' Team Alaska exclaimed in a statement.

Hanson is documenting his experiences with YouTube videos under the name “The Eskimo Ninja” that, among other things, show his hand-built course at the end of a rugged world. He used new, sturdy plywood for his 14-foot warped wall, a curved obstacle that athletes on the show must get climb to ring the finish bell. But much of his course is built with driftwood, studs from a burned house and other scraps.

In one video from May, his friend Isaiah Woods is tying ropes on old doors dragged back from the town dump to replicate a challenge in which contestants must maneuver in the air from one suspended door to the next.

"Isaiah struggles a lot with figuring out how to tie stuff down, even though he's a fisherman," Hanson says. Woods fake-stumbles. "That about sums it up!" goes Hanson.

His videos are quirky and fun and sometimes serious. In this one, Hanson points to a "Play at your own risk" flyer posted on the obstacle course. He talks about how he made a minicourse for children and how the big one is for his training.

A friend, Forest Strick, also helped him add onto the course this year. Strick moved to the village to train and is hoping to make it on the show in 2017.

Children in the village who were fans of "American Ninja" last year convinced school coach Hanson to give it a try.

His submission video, produced with Woods, showed him building two obstacles always on the show, a salmon ladder – a pullup bar that contestants push up ever higher rungs – and the warped wall.

"But mostly it involved the Native games that I've played," Hanson said. "It's a TV show and they are not just looking for a strong guy. They could find those by the millions in Los Angeles. So they are looking for a different story."

He says he is doing the show for Native people and especially for the kids. If he can do something like that, so can they, he tells them.

He was squeezed out last year in the qualifying round by 3/10 of a second. But he had a blast trying.

"Technically, I lost," Hanson said of his first try. "I want to show them, 'Hey, I can come back.' Even though you lost, you stick to it. You can get better at things and learn from your failures."

This year, for the show's eighth season, he has his game face on.

"I put my training into fifth gear," he said.

The warped wall this season was 6 inches higher than before, higher than the one he built with a rock wall on the other side. But tough Bush conditions bring benefits.

"It's actually harder than the one on the show. It's on the beach so I have sand to run up against before I get to the top. It's a lot slipperier," Hanson said. And it's not on level ground, so tilts a bit forward. The inward curve is even more extreme.

"You really have to commit. If you don't commit to my warped wall, you are going to have to jump about 14 feet, back to the ground."

This season, Hanson was the first competitor on the show to make it up the taller wall.

A stormtrooper in Juneau

His father, Bret, is non-Native and from a lot of places. His mother, Davida, is Inupiaq with family roots in Barrow. Bret used to be a contractor but now is more of a entrepreneur. They run the pizza place, a bed and breakfast and a lumberyard.

Hanson hunts and fishes and lives a traditional life with now-extraordinary elements. He loves the dried black meat of bearded seal, or oogruk, and his all-time favorite food is muktuk, bowhead skin and blubber. He says he once got second in muktuk eating at the World Eskimo-Indian Olympics.

"Could eat 5 pounds of it without blinking," he said in an email.

A crew came to Unalakleet to film him for the state of Alaska campaign "Play Every Day." He traveled to Los Angeles to demonstrate Native games at a fundraiser for a suicide prevention and wellness program called "Popping Bubbles" created by Ariel Tweto, a reality TV star who also grew up in Unalakleet. Last year, after his first try on "American Ninja," he did a round of motivational speaking.

In May, Alaska's first lady Donna Walker honored him as one of 13 top volunteers of the year for the state for his work with community youth including starting a 5K fun run.

"Yeah, super intense," he says on his YouTube video about his trip to the capital for lunch with the governor. "The coolest part about landing in Juneau was this," Hanson says, pausing before turning his phone to a display case holding something startling for Alaska, a "Star Wars" stormtrooper costume. He gives the look and keeps on.

Hanson sees the despair around him even as he builds strength inside and out. Of the 12 teammates on Hanson's high school basketball team, six have killed themselves, he said.

"So that means, of my teammates, I have five left," he said.

Alcohol and suicide twist around each other into a deadly spiral, he said. He doesn't drink, never has. His mother is long sober but when he was young, he said, she drank.

"When she quit drinking, it was like the clouds were removed from the sky," Hanson said. "All of a sudden, the sun was brighter and everything was more positive."

In Unalakleet, he coaches cross-country, volleyball, Native Youth Olympics and a bit of basketball though he's dialed that one down to serve as assistant to the assistant so he can train and build his house. He's worked as a teacher aide and has been studying to be a teacher.

He played just about every sport as a kid.

"We've been chasing him around his whole school career," his father Bret said.

Hanson is working on his house and other construction projects in the village through the lens of a TV ninja in training. He'll climb a ladder as fast as he can, or skip it altogether if there's a ledge he can use.

When he competed in Los Angeles, he wore an atikluk – the Inupiaq word for kuspuk – to the arena. His parents and girlfriend Joanne Semaken were there with a crowd of his supporters, cheering him on. Even the athletes have to make their own way to the competition. GCI, which is featuring Hanson in its "Alaska Born and Raised" ad campaign, is covering some of his expenses. Others posted Facebook videos watching it at home.

"Careful there, Nick," an elder can be heard saying on one.

"Eskimo! Eskimo!" his fans in the studio audience yelled.

Hanson, whose Inupiaq name is Iligutchiak after a great uncle, said he embraces the word "Eskimo," even though it's out of favor among some. President Obama recently signed legislation replacing it with "Alaska Native" in federal laws.

Older people are the ones typically offended, Hanson said, but his aapa and his aaka – grandpa and grandma – up in Barrow call him Eskimo Ninja. Just think of the World Eskimo-Indian Olympics, he said. That's a huge gathering that celebrates sport and tradition, and it bears a name that brings pride.

Besides Los Angeles, the "American Ninja" competitions this year is in Atlanta, Indianapolis, Oklahoma City and Philadelphia. The LA finals, which will include Hanson, are set to air on NBC July 11. Hanson said he isn't allowed to talk about how he does before a show airs.

The top competitors end up in Las Vegas for national finals. If he won the $1 million prize, Hanson said he would finish his home and help his parents and other family members with anything they needed so everyone would have good shelter when winter comes. Then he would send his parents on a special vacation, he said. "A honeymoon again, so to speak."

He would stay in the village. It's his home, he said.

A couple of days after the premiere, Hanson posted a video thanking everyone who helped and backed him. He put in a plug for his Unalakleet running club and urged all runners to go out and do a mile.