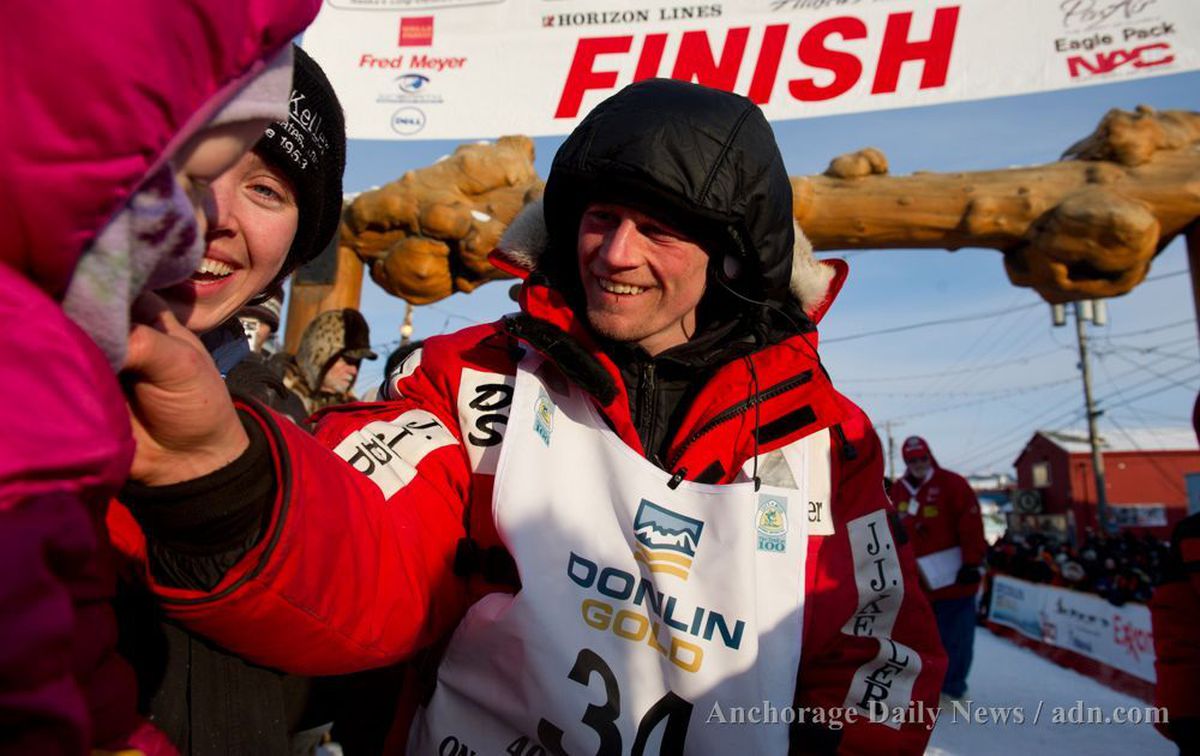 Reigning Iditarod champion Dallas Seavey said a new race rule that allows mushers to use and carry two-way communication devices will only lead to more suspicion among competitors and outside coaching during next year's 1,000-mile race to Nome.

He wants the rule rewritten.

"There's no way to actually monitor whether or not somebody is using it for outside assistance," Seavey said in an interview Monday about the now permissible cellphones and satellite phones for mushers. "We're going to start looking at mushers as being more of an athlete than a coach."

Seavey started an online petition last week calling on the Iditarod Trail Committee Board of Directors to reconsider the new rule that allows two-way communication devices for the 2017 Iditarod. The rule comes with two caveats: mushers cannot use the devices to contact the media or to receive outside assistance.

But Seavey said it's impossible for race officials to enforce the no-coaching caveat. How would race officials know what information mushers receive when they use their private cellphones or satellite phones?

"What really concerns me is the amount of suspicion that's going to surround everybody out there," Seavey said. "All of a sudden, everybody is suspecting everybody."

A musher could have someone at home analyzing the GPS tracker that displays everyone's position on the trail and calling in advice. If a musher made an exceptional judgment call on the trail, a competitor could speculate that assistance was received, Seavey said.

By Monday evening, Seavey's petition had received more than 1,000 signatures from across the country, some of them from mushers.

"The rule needs to be rewritten," Seavey said. "This is the first time that I've felt that there's a rule that's really, really poorly thought out."

Stan Hooley, Iditarod chief executive officer, said in a message Monday that he had been away from the office for several days and had not yet had a chance to discuss the petition with anyone. Until the board meets again, he said, he could not comment.

Iditarod race marshal Mark Nordman did not respond Monday to a request for comment.

Both Hooley and Nordman were at the May 27 Iditarod board of directors meeting when the new rule was approved, reversing an outright ban on two-way communication devices. It's a ban that led to the 2015 disqualification of musher Brent Sass, who carried his iPod Touch during that year's Iditarod.

Directors at the May meeting said they approved of the new rule for safety reasons after this year's race. They said mushers at the front of the pack would not have time to mess with phones.

Phones might have helped, directors said, when Iditarod mushers Aliy Zirkle and Jeff King said a snowmachiner attacked their teams on the Yukon River trail leading to the village of Nulato. One dog was killed, others injured and a man arrested.

Zirkle, who placed third in this year's Iditarod, said in an interview Monday that over 20 years of racing she would never have thought of using a phone during a sled dog race and opposed any form of outside assistance.

"But March 12 changed my life," she said. "Of course, I cannot say that having a sat phone would have stopped the repetitive attempts on my life. But I sure would have tried to call for help."

Zirkle said she hoped mushers who sign up for the 2017 race will follow the new rule and will not use the phones to receive tips and cheat.

"I, for one, will continue to follow the rules. I can only hope that my competitors are ethically upstanding enough to do the same," she said. "Will there be cheaters? Yes. Are there now? Yes."

Seavey said he would be OK with the race allowing two-way communication devices for emergency use. But the rule would have to be rewritten. He offered suggestions in his petition.

It said mushers could carry two-way communication devices in a container secured with a tamper-proof seal and registered with race officials. If the seals were broken, race officials would investigate the contact made.

Or, the petition said, the Iditarod Trail Committee could provide two-way communication devices only to mushers who requested them and the committee would have unlimited access to the call logs. If this costs too much, the committee could charge mushers for the devices.

Seavey said the committee should also establish a 24-hour emergency contact line to field emergency calls if mushers need to use their phones. He requested that the Iditarod board of directors reconvene to rewrite the rule before the signups for next year's Iditarod start June 25.

Hooley said that by Monday no meeting had been called.

John Handeland, an Iditarod director, said in an interview Monday that he had not yet heard from any mushers who were upset about the rule change. He said the rule was proposed by the Iditarod's rules committee, and he supported their actions.

"They're the experts, I am not," he said. "I'm certain that they had a long deliberation on it before they made that recommendation."

Handeland said he didn't think competitive mushers would have time to use the phones to get outside assistance. Access to the devices could help those in the back.

"If somebody at the back needs to call home to get encouragement to continue mushing — I'm all for that," he said.

Handeland said Iditarod rules constantly evolve, and if they did not work for the 2017 race, they could be reexamined.

Iditarod musher DeeDee Jonrowe said in an interview Monday that she originally signed Seavey's position but had since rethought her stance. She said she wanted to support the Iditarod board and the rules committee. Jonrowe's husband sits on the board.

"I do believe that the board felt compelled to try to address the safety issues that came about this year," Jonrowe said.

She said that while mushers do have trackers with SOS buttons that they can push in the case of an emergency, it's not the same as a phone call.

"That's not immediate; a telephone call is immediate," Jonrowe said. "You've got a dog dying because you just got hit by a drunk, that's immediate."

However, Jonrowe said she supported Seavey's suggestions that would help ensure that the phones were only used for emergencies.

Seavey's father, Mitch, placed second in this year's Iditarod and said Monday that he signed his son's petition and also felt that the "no cheating" clause, as written, was not enforceable. He said he read it as more of a "please don't cheat" suggestion.

"I have no intention of cheating or taking advantage of it," Mitch Seavey said. "But from a bird's eye view, it doesn't seem like that's any way to manage the event."

In the past, he said, if mushers saw someone talking on a cellphone, they knew that was a rule violation. Now, it's impossible to know if they're violating the rules, because what's being discussed is unknown.

Even if someone simply called home to a family member to say hello, that person could inadvertently provide information, he said. Plus, he said, if it's not an emergency, who do mushers really need to call while snaking their way through the Alaska wilderness?

"I don't think we're calling our broker out there," he said.