Driving the Alaska Highway -- circa 1946 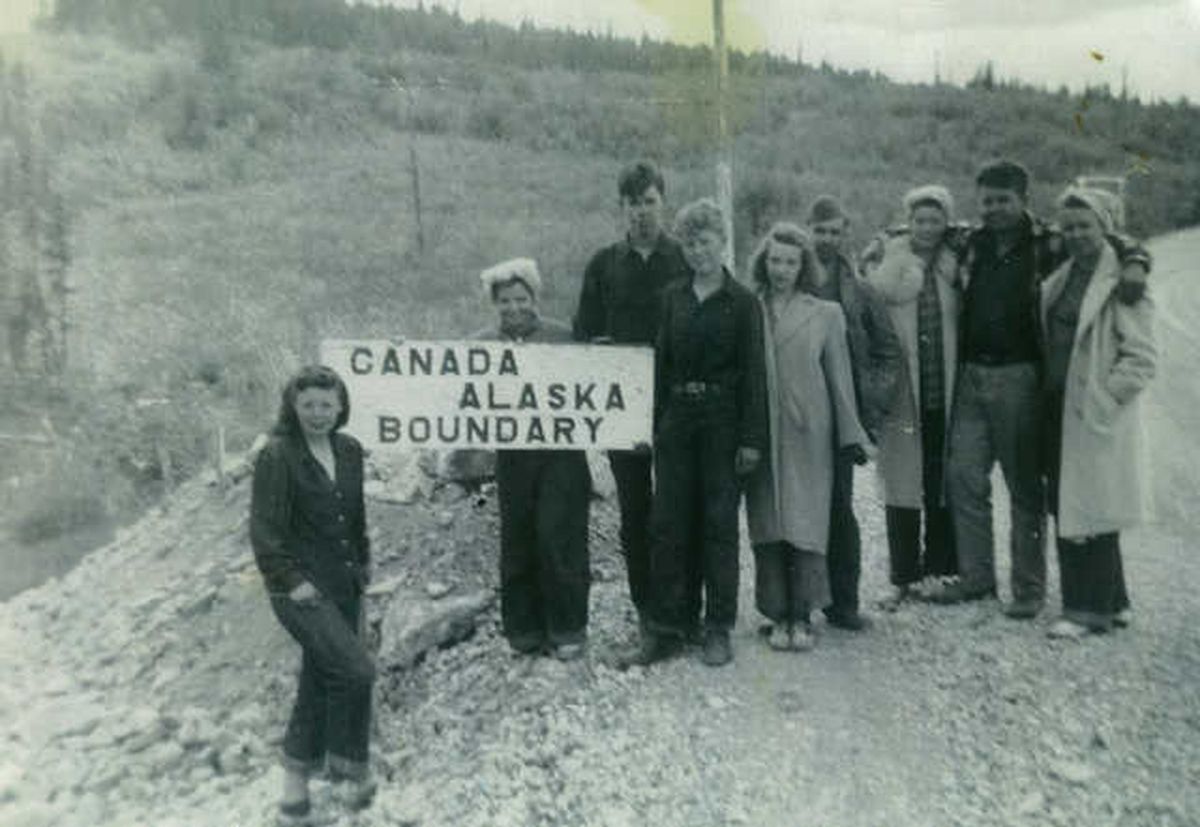 America had no reality television in 1946, but if it had, the camera crews would surely have descended on the tiny caravan of the first civilians to travel the Alaska Highway.

"Caravan" is the word Donna Grant uses for the convoy of two cars and two trailers. On June 26 of this year, almost 70 years to the day that she rolled across the Alaska border, she recalled the trip at a family gathering at her Hillside home with her cousin, Joe Hayes.

The two are the last living members of the party.

Grant's father, Herman Cotter, was an Arkansan who worked in the Aleutians and on the Alaska Highway during World War II. When the war ended, he sold his brother-in-law, Norman Hayes — better known as Darb, Darby or Pops — on the idea of driving up the 1,400-mile-long pioneer road with their wives, Cora Cotter and Dicy Hayes, and six collective kids to stake a claim in the land of the midnight sun.

At age 11, Donna Grant was the youngest.

"Dad was always reading about fishing and hunting in Alaska Sportsman and other sports magazines," Grant said. "He'd grown up trying to subsist on fish and game in Arkansas. People needed the food. But the game wardens were always looking over their shoulder. To him, Alaska sounded like heaven."

Depending on what source you trust, the highway didn't open to nonmilitary traffic for two or more years. But Herman Cotter knew a few loopholes. At the end of the war, the road passed from American to Canadian jurisdiction and the Canadians hadn't quite worked out their rules. It was implied that the Mounties might let people through if they had the right papers.

Cotter wrangled permission from the Canadian government to make the trip, even though officials stressed that he'd be on his own. But he and Hayes got the paperwork and headed out with their clans in tow. They may or may not have actually been the first nonmilitary traffic; records are so spotty that not even a list of men who worked on the road appears to exist. It's possible that some adventurous motorist went through unannounced, but if so, the records aren't available. The permit that Joe Hayes found among his mother's effects a few years ago would seem to be the earliest one around.

The Alaska Highway was little more than a narrow mud trail with steep grades and wooden bridges. From its construction through the end of the war its only traffic had been military, mostly Jeeps and Army trucks, half-tracks and Caterpillars. The Cotter-Hayes expedition used family sedans, a 1937 Willys-Overland and a 1936 (or maybe '38, no one's sure) Chevy. The two-wheel-drive city cars towed trailers hauling food, family belongings and hundreds of gallons of gas.

"There were no accommodations on the road," Hayes said. "No gas stations, no motels. We slept out in bedrolls. We made all our own meals. We didn't eat at one public place. There weren't any public places."

Not quite, Gates said. "We ate at one restaurant somewhere on the road. You ordered everything on the menu. You were a starving teenage boy."

Hayes, who was 16 at the time of the trip and still has the build of a starving teenager, looked at her for a moment, then shrugged. "OK."

Both remembered the Willys. It had headlights built into the front fenders, an innovation at the time, and a bulging front engine cover shaped somewhat like the bow of a kayak. It had a light engine that got good mileage — a plus on the Alcan — but lacked the power to pull the trailer up steep grades. It had to be turned around to ascend hills by crawling backward. "The reverse gear was the lowest," Hayes said.

At one point, the Chevy lost its tie rod and the car flipped. No one was hurt, but it took three days to fix the damage.

A bigger chore was fixing flat tires, Hayes recalled. "The rubber was rationed in the war and the tires were synthetic," made from tar and petroleum. "They didn't hold up."

With no service stations for hundreds of miles in either direction, the travelers had to do it themselves. That meant a miserable, knuckle-busting process of removing the wheel, then wrestling the tire off the rim using pry bars, extracting the inner tube, finding the leak, patching it, reinserting the tube, re-inflating it with a hand pump, coercing the tire back onto the rim and, finally, bolting the wheel back in place. Hayes said there were 13 or 14 such flats on the trip.

Two weeks after leaving Washington state, the caravan arrived in Eska, near present-day Sutton. It was the eastern terminus of the Alaska Railroad and Herman Cotter had a job waiting for him. "It was a sweet place for kids," Grant said.

The Cotters later moved to Healy, then Anchorage, where the railroad provided them with a Loxtave house, a military surplus dwelling that used interlocking planks somewhat like a Lincoln Log kit. It was considered a luxury. "There were a lot of people living in Quonset huts," Grant said. "But we got a pre-fab. The railroad was very good to its employees."

The Loxtave house is still in the family. "One thing about our family, we never let property go," Grant said.

The Willys with the Hayes family in it continued to Anchorage, which struck Joe Hayes as "a big city."

"The first day we were here, my dad got a job with the Northern Commercial Company and my mom found work as a seamstress," he said. "The first day."

Joe Hayes later served in the state Legislature and made enough money in real estate to buy an estate in his home state of Missouri, big enough for a landing strip. He traveled the Alaska Highway route many times, but usually flying his own airplane.

Grant still lives on the spacious lot off De Armoun Road near where the Hayes family once had a home.

Shortly after the Cotters and Hayeses entered Alaska, Canada quit issuing permits to civilians and shut down the highway to all nonmilitary traffic. The first two cars made it through thanks to the resourcefulness and mechanical skills of the drivers — and probably some good luck. Too many voyagers who followed in their wake didn't have such fortune, however, and the government had to mount rescue operations. The road remained off-limits for another year or two until facilities to house, feed, fuel and fix up travelers were up and running.

Family photos show Grant's sister, Joyce, modeling a prom dress next to a 1930s era Chevy near the water tower on Government Hill. The Willys was passed around the family until it wound up in Joe Hayes' hands. It suffered mightily in the winter, he recalled, sometimes getting so cold that the gears froze. It's said to have ended its career after a collision with a bus.