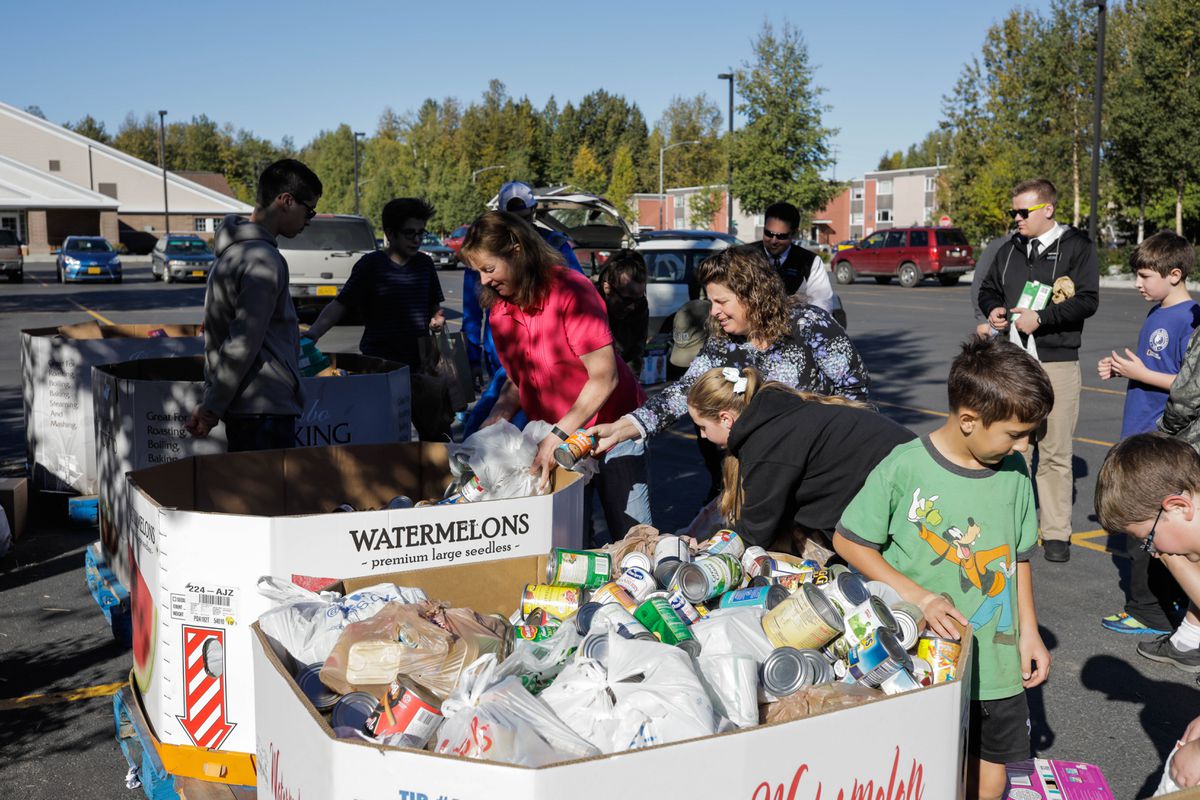 Volunteers sort donated food for the Food Bank of Alaska on Saturday, Sept. 10, 2016. The Feeding Our Neighbors food drive was organized by the Church of Jesus Christ of Latter-day Saints. (Loren Holmes / Alaska Dispatch News)

Volunteers sort donated food for the Food Bank of Alaska on Saturday, Sept. 10, 2016. The Feeding Our Neighbors food drive was organized by the Church of Jesus Christ of Latter-day Saints. (Loren Holmes / Alaska Dispatch News)

Hundreds of volunteers fanned out around Anchorage Saturday morning to knock on doors and collect food donations in hopes of filling up the state food bank's empty shelves ahead of winter.

The "Feed Our Neighbors" food drive, organized by the Church of Jesus Christ of Latter Day Saints, fit into a larger series of events for what's being called "Hunger Action Month." The events aim to draw attention to hunger in Alaska, which the Food Bank of Alaska estimates afflicts one in seven of the state's residents.

Saturday's logistical feat, which involved detailed routes for volunteer groups, is described as the largest single-day food drive in the state. The past two drives organized by the Mormon church collected more than 55,000 pounds of food for the Food Bank.

"The 'giving attitude' is more around the holidays," Milliken said.

In front of a Church of Jesus Christ of Latter Day Saints chapel off Baxter Road, organizer Clarke Brown flipped through maps showing routes. People could use the maps to record which houses were visited and how much food was collected.

They got it on Saturday. There wasn't a cloud in the sky.

For about an hour, coordinator Kaneyo Hirata and several members of her family walked through an East Anchorage neighborhood knocking on doors.

A yellow flower tucked behind her ear, Hirata emerged from one front door with an armful of cans — sweet peas, pork and beans, garbanzo beans. She walked back to the Dodge Ram truck parked by her husband, Afa Ulufanua-Mahe, and tipped the cans into the bed of the pickup.

She said volunteers seem to gather more donations in East Anchorage, home to some of the city's lower-income neighborhoods.

Dominador Soliven, 37, gave two bags of food to 24-year-old Keena Manumaleuna when she approached him at his garage sale. He said he and his wife regularly bring food donations to their Catholic church.

He said he's from the Philippines and knows people in need back home. Donating here feels like a way to help the greater cause, he said.

As Hirata walked, she thought of her 10-year-old son, Hajime Ulufanua-Mahe, who died in January after being injured in a car accident.

Her son collected food for the "Feed Our Neighbors" drive last year. He also volunteered at programs like the Children's Lunchbox, Hirata said.

"He loved serving," Hirata said, smiling at the memory.

By noon, in the front of the Church of Jesus Christ of Latter Day Saints' chapel off Tudor Road and Arctic Boulevard, cars were pulling up in the parking lot. People filled up large cardboard boxes with dry and canned goods.

Brown dashed over to get the keys to the church building. Someone had donated a frozen turkey.

"We'll run it inside until this is all over," he said.

At the end of the day, the amount of food was still being weighed. But more than 800 volunteers helped fill up four box trucks, said organizer Tom Wardhaugh.