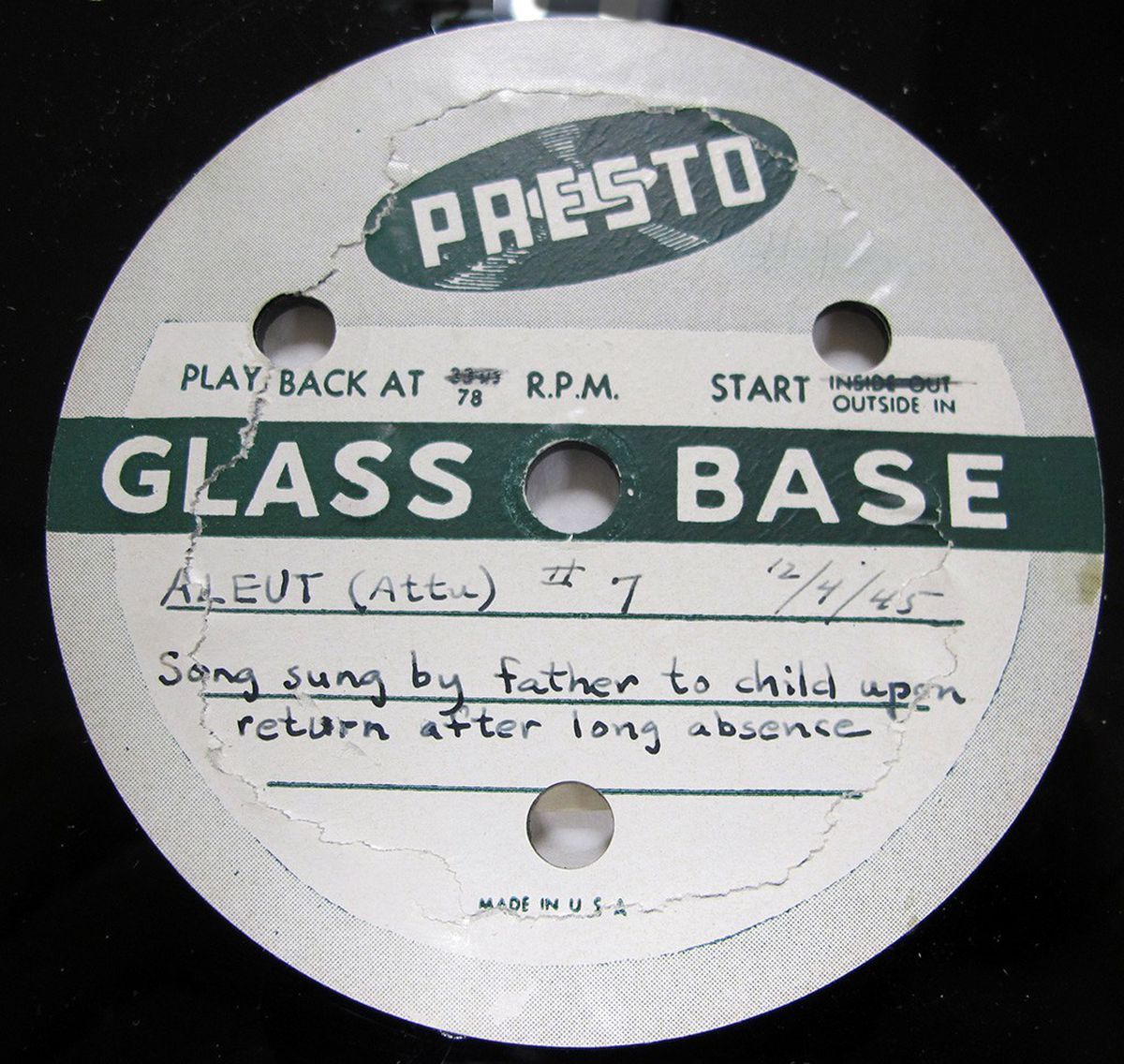 The label of one of the 78 rpm recordings from the Dorothy Jean Ray collection. (Courtesy UAF)

The label of one of the 78 rpm recordings from the Dorothy Jean Ray collection. (Courtesy UAF)

Four 78 rpm recordings made by Attu villagers in 1945 and considered too fragile to play were made audible again using high-tech audio imaging this summer. A process that captures the sound without touching the grooves has brought back the voices of Alaskans interned in Japan during World War II.

The discs were found among papers and letters donated to the Alaska and Polar Regions Collections and Archives at Rasmuson Library at the University of Alaska Fairbanks by the late anthropologist Dorothy Jean Ray, who died in 2007. They were turned over to collection manager Robyn Russell, who immediately suspected their importance.

"They looked like LP discs, but were a lot heavier than a standard record would be," she said. "There were a few words on the labels, 'Conversations about basket making,' 'Love song,' 'Attu.' And the date, December of 1945. I knew these were probably Alaska Native language materials and probably Aleut."

However, the university did not have the equipment to play the discs.

"I did some research and discovered that they were acetate glass-core discs," Russell said. "They're a lot more delicate than plastic. If you put them on a record player with a regular needle it will ruin the cut."

Russell said records of that time resembled a sandwich, with layers of grooved acetate that produced the sound mounted on a center base. For most of the 78 rpm era, aluminum or some other metal was used as the center, but because of the need for armor, machines and shells during World War II, glass centers were used instead, even in the period immediately following the end of the war. They were in precarious condition.

"What happens over time is that the top layer starts to crack and come loose," Russell said. Three of the discs appeared to be in fairly good condition, but a fourth "was about to fall to pieces."

The discs were carefully packaged and sent to the Northeast Document Conservation Center in Andover, Massachusetts, which has technology called IRENE (for "Image, Reconstruct, Erase Noise, Etc.," but also a nod to one of the first recordings retrieved by the process, the Weavers' recording of "Goodnight Irene").

Russell explained IRENE as "an electron microscope thing. They take really close-up pictures of the grooves and use a computer algorithm to play it back. It's become a way to extract sound from wax cylinders and other old-fashioned, delicate recordings."

Fairbanks received the electronic files of the recovered sound from Andover in July. The Northeast Center people had pushed to complete the job because an international linguistics conference was scheduled for UAF at that time. Among the participants were two people knowledgeable in Unangam Tunuu, as the Aleuts call their language: UAF linguistics professor Anna Berge and Moses Dirks of Unalaska, a Native speaker of the Atka dialect of the language. Dirks was amazed to hear the dialect of Attu, once the closest Aleut village to Atka. Furthermore, he thought he recognized the voices as belonging to Mike and Parascovia Lokanin, husband and wife.

The Lokanins were among 41 Aleuts brought to Japan after Attu Island was invaded in 1942, the only American civilians taken from American soil and imprisoned during the war. The Attuans suffered from malnutrition, disease and forced labor. Among those who died was their daughter, Tatiana. Another child born during the internment also died.

Only 25 Attuans lived to return to America. They originally arrived in San Francisco and then were sent to Seattle to await resettlement in Alaska. While they were waiting there in December 1945, Verne Ray, the husband of Dorothy Jean Ray and an anthropology professor at the University of Washington, learned about them and had the Lokanins record songs (some with guitar) and conversation in a studio at the campus.

After that, it seems, the records were put into a box and forgotten about. A press release from the Northeast Center said "the intact discs looked as if they had been played rarely, if at all." Verne Ray died in 2003; Mike Lokanin died in 1961 and his wife died in 1994. After their return to Alaska they had six more children, some of whom are still alive.

Given the ordeal of the Lokanins and the other captives of Attu, some of the material on the discs is notably poignant. The label writing mentions a "Mourning song for deceased lover" and "Song sung by father to child after long absence," in addition to a love song, a song sung in a canoe and a conversation about basket-making. The Attu women were famous for their basketry before the war.

Dirks' identification of the speakers turned out to be correct. At one point the voices on the records identified themselves as the Lokanins. While the differences between the Atka and Attu dialects made it difficult for Dirks to catch everything, the songs sounded familiar enough that he could conclude the discs were playing at the right speed. The "Conversation concerning basket making" seemed to be more about subsistence in general, he thought.

The government forbade residents from returning to Attu. The village had been destroyed during the Japanese occupation — much of the battle area was littered with unexploded munitions and the surviving Attuans were considered too few to re-establish the community. Instead, they were placed in Atka and other towns. With the speakers scattered and separated, the Attu dialect died out. It is believed that there are no native speakers left.

All of which makes the Ray recordings particularly precious. Dirks plans to spend more time listening to the recordings and transcribing them. Leslie McCartney, UAF oral history curator, said copies of the recordings and the transcriptions will be given to the Alaska Native Language Archive and the Aleutian Pribilof Islands Association.

She also plans to get copies to surviving members of the Lokanin family and hopes to check archives in Washington state where Verne Ray's papers are held and search for more information about how the recordings came to be made.