Healing foods: How a chef is embracing a new cuisine for patients at Alaska's Native hospital 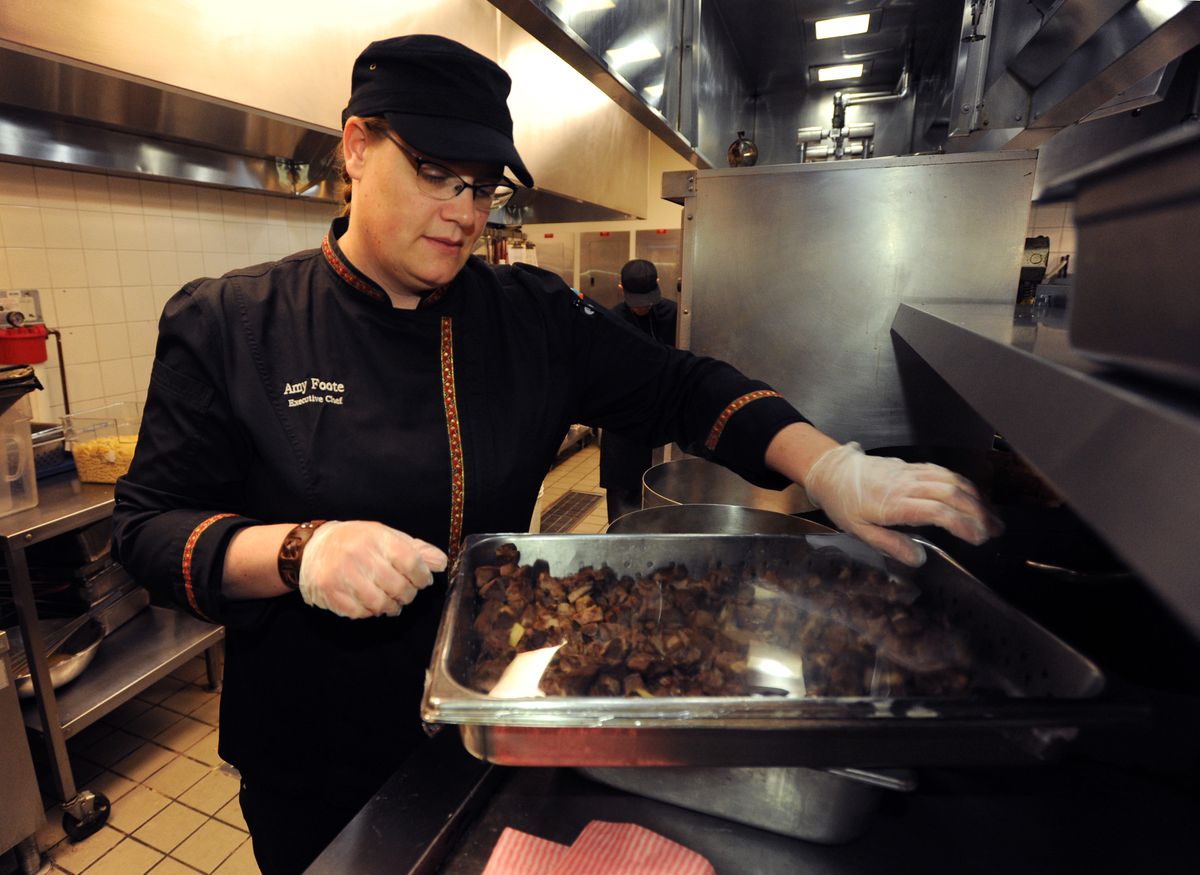 Living off the land and foraging is something that comes naturally to Alaska Native Medical Center executive chef Amy Foote. It's such an important part of her life that when she moved to Alaska from Montana in 2014, she brought three coolers of antelope and elk as her checked luggage.

What she didn't immediately bring? Her three dogs.

"I bought a chest freezer before I bought a bed," Foote said. (The dogs joined her later, she said.)

Foote, 39, said the mentality of using harvested foods is something still at the front of her mind in her role as chef for the Anchorage hospital.

It's a challenging job. Foote oversees about 3,000 meals a day and must balance the health needs of about 175 patients staying in the hospital each day, many of whom come from rural Alaska villages and want traditional foods while they recover.

Foote might not be from Alaska, but she's embraced the challenge of working with traditional foods, according to Dr. Gary Ferguson, a naturopathic doctor and former director of wellness and prevention at the Alaska Native Tribal Health Consortium.

"She gets the philosophy of our cultures," he said, "and that's an important synergy."

Foote's interest in food started in childhood. She grew up in Idaho and by age 6 was working with her siblings to prepare and clean up dinner twice a week. She always preferred food prep to the dishes.

That love of food translated into working in kitchens as an adult. For decades she came to Alaska each summer to work in cruise industry kitchens, starting as a dishwasher and working her way up to the line. She even met her husband on Growler Island in Prince William Sound.

She eventually went to culinary school at Boise State University and began working in hospital kitchens. She said she considered going into social work, but it lacked the creativity she craved.

Foote channels that creativity into the new menu items she comes up with at the hospital. She said she tries to balance traditional food preparations with new creations that have broad appeal.

For every fry bread or akutuq (also called "Eskimo ice cream"), there's a pizza with fiddlehead ferns as a topping. Last fall she was serving scrambled eggs with beach asparagus and salmon bacon to patients.

Even in her time off she finds inspiration around Alaska. Expeditions around Anchorage led her to create wild rose petal cupcakes with cream cheese frosting, dandelion blossom syrup and capered pineapple weed.

Recent changes in federal law now allow the Anchorage hospitals to accept donations of wild foods like moose, seal and caribou. When food donations come in — whether it's moose or seal — Foote is in charge of figuring out how to include it on the menu.

Last spring the hospital received a donation of herring eggs from Southeast Alaska. At first she wasn't sure what to do with them. But she found herself inspired while stripping the briny, pine-scented fish eggs off the spruce boughs. The blanched eggs were served four different ways for patients over the summer and fall — plain, with mayo, soy sauce or an olive oil blend.

Foote said she learns a lot from kitchen staff, too, who hail from not only from rural Alaska but the rest of the world.

"Learning and listening is the biggest thing," she said. "You can't come in and think you know how to cook this stuff."

Correction: An earlier version of this story incorrectly stated Gary Ferguson is the director of wellness and prevention at the Alaska Native Tribal Health Consortium. He is the former director. He is currently CEO of RurAL CAP.