A hub for 'makers' thrives in Anchorage 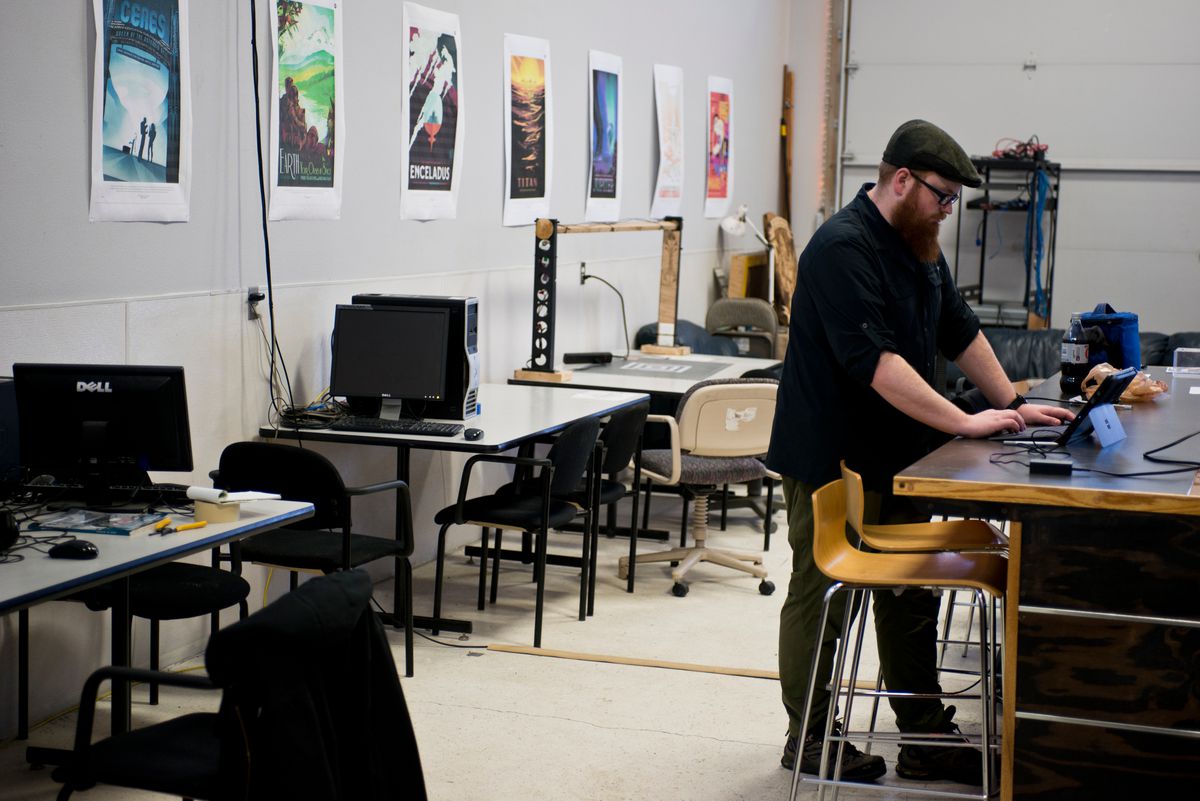 Caleb Lovelace works on a design that will be uploaded to a laser cutter in a class at Anchorage MakerSpace on April 6. (Marc Lester / Alaska Dispatch News)

Caleb Lovelace works on a design that will be uploaded to a laser cutter in a class at Anchorage MakerSpace on April 6. (Marc Lester / Alaska Dispatch News)

On a recent evening in a workshop in Anchorage's Spenard neigborhood, a group of people gathered around a laser cutter to chart the machine's progress engraving a chunk of wood.

With some assistance from instructor Jess Austin, Andrew Cater pulled up his design on a nearby computer and went through a checklist: Check the water. Turn on the water pump and the air. Check the laser cutter bed for obstructions. Eventually, the device noisily went to work.

The finished product was a coffee tap handle with the logo of the cold-brew business Cater is working to get off the ground. It was made as part of a grant-funded laser-cutting class at Anchorage MakerSpace.

Driven by a desire to create

Anchorage MakerSpace, a hub for do-it-yourself-minded Alaskans, is a roughly 3,600-square-foot shop next door to Tap Root Public House in Spenard. It's a product of the "maker" movement in the U.S. — comprising people who come together to create things. Those things can be anything from robots to costumes to furniture to promotional material for a small business. Makerspaces have grown in popularity in the last decade and are all over the country, though they range in size and scope.

Diamond Redmond, one of Anchorage's MakerSpace's co-founders, said the maker movement in the state's largest city grew out of Alaskans' desire to share their knowledge with others and learn new things, but also to express themselves.

"Its roots come out of the fact that I don't think people get to create anymore," said Redmond, 36, whose projects include custom leather binding. "I believe that all humans have a natural desire to create and make. It's part of what makes us unique as a species. And modern society has become so efficient at meeting all of our needs and making everything that we could possibly want, and a lot of things that we would never possibly want; we all miss out on that expression."

Volunteers run the space, which is divided into two parts. A fabrication side holds welding equipment, a kiln, bandsaws, a wood lathe, a CNC (computer numerical control) router and various tools. The fabrication area connects to a less-dusty lab side that has the laser cutter, a vinyl cutter, plotter, 3D printers, computers, a robotics lab and stock electronics equipment.

Some people like to do customizations for their cars. Others use the space for artistic endeavors.

Pieces of wood with laser-cut designs carved into them could be found throughout the shop the day of the class. Austin, a 31-year-old software developer who taught the laser-cutting class, once used the laser cutter to make a puzzle for her mom. And when Alaska provided the Capitol Christmas tree in Washington, D.C., in 2015, some of the custom ornaments on the Lutz spruce were made at Anchorage MakerSpace.

"My nieces were actually the ones who got to go and turn the tree on," Redmond said from a coffee shop downtown recently.

"That's kind of our role, is to be like a hub for different projects. All different sorts of things come and go throughout there," he said of the shop.

Anchorage MakerSpace members can use the shop as they please, and classes are open to the public. There are also Monday night open houses where anyone can stop by. General membership that includes family members is $100 a month, but there are discounts for military, educators and student memberships for college students.

"At 100 bucks a month, you have access to tens of thousands of dollars of tools and the space alone is massive," Redmond said.

Membership fluctuates month to month, but Redmond estimates there are close to 40 members at the moment. And the maker community in Anchorage is bigger than the space, he said, adding that Cook Inlet Tribal Council's Fab Lab (fabrication laboratory) is another great resource.

Anchorage MakerSpace's members' monthly payments help keep the shop's lights on. Austin, who is also a board member, said they've also started looking to grants for additional funding, which they did for the laser-cutting class.

But the passion of the people who use the volunteer-run space is crucial.

"So everything that happens from cleaning the bathrooms to paying the bills to fixing the machines to buying pieces to fix the machines, teaching the classes" is fueled by volunteers, Redmond said.

Classes, like Austin's laser-cutting tutorial, help people learn to use the tools available. Some people came just to watch the laser cutter in action. Others had their designs in hand and were waiting their turn. Austin was there to guide them through the process.

"Once I learn about something I just get really excited and want to tell other people about it," Austin said. "And I think the classes are just a nice way to add structure to that."

Classes can also attract potential new members to Anchorage MakerSpace. Cater said he was interested in becoming a member after learning how to use the laser cutter and seeing all the other equipment at the Spenard shop.

"This is so cool," said Cater while he watched the laser cutter at work.