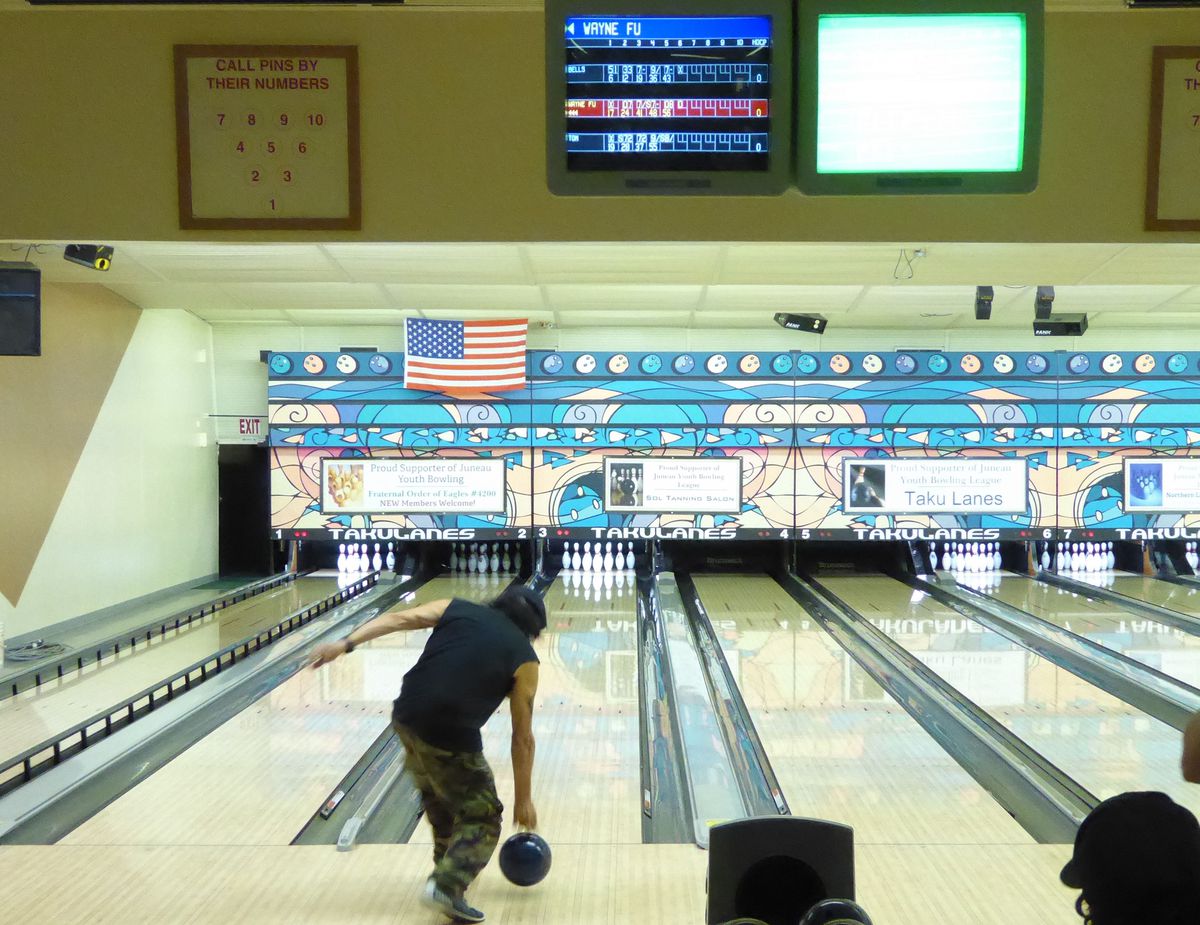 JUNEAU — Two Saturdays ago, it was the Street versus the Beat at the Taku Lanes bowling alley. Both teams celebrated strikes and laughed at occasional gutter balls. But all but one of the seven people bowling against the police were homeless or in some kind of unstable housing.

Wayne Fu Smallwood is ­67 and lives in a cabin in the woods.

"I just got a wood stove and candles, but I'm happy," Smallwood said.

Homeless Juneau residents and local police competed on equal terms to draw donations to the Glory Hole homeless shelter. The same people who use the shelter's services helped raise over $3,000 worth of donations.

Smallwood said he doesn't have bad interactions with the police. But, he said, a lot of people living on the street try to avoid cops.

"When you're on the street, you're on the sidewalk," Smallwood said. "You want to stay away from the cops. When they come around, then you have to move on."

Smallwood was referring to a sore subject in Juneau. Often, property owners call the police to stop homeless people from sleeping in downtown Juneau doorways.

Smallwood thinks it's good for the two teams to play each other.

"I think it could probably open some doors," Smallwood said. "People that are on the street could come to the cops with their problems, instead of trying to deal with it themselves."

On this night, officer Ken Colon said everyone had the same goal.

"Just to have fun. Get out here and have fun (and) be individuals," Colon said. "(It's) more of a personal side, a human side."

Colon walks the downtown beat and comes face to face with Juneau's homeless every day.

"I know a lot of stories that they are intimate with me about and have a better understanding with them. However, tonight, we're all equal," Colon said. "Tonight feels like we're all equal and we're just having fun and (can) kick back (and) relax. That's pretty much how I feel and think everyone else feels the same way."

Rebecca Service organized the event. She said her goal is to bring Juneau's homeless and police closer, "instead of separating people into categories, and just kind of meeting on the same lane."

Service moved to Juneau two months ago from San Francisco, and right now, she sleeps in her van. She was going to do this same event before she left San Francisco. She was inspired when she saw several cops wearing gray bowling shirts.

Service asked them, "Hey, are you guys in a bowling league?"

They responded with a question: "What do you mean?"

"'Well you're wearing all bowling shirts, right?' And they got grumpy and walked off," Service said. "But then, the next cop I saw, I'm like, 'Hey, do you bowl?'

Eventually, more cops signed onto the idea, but finding the space to play was impossible in the big city. Now that Service lives in Juneau, that isn't a problem.

"Anywhere you go, you should leave it better than you found it," Service said. "I came here and I kind of put that idea out there and I got a good response. It's an amazing community here. It's very supportive of each other."

"Technically, the Streets won," Service said. "Our average is a little bit higher than the police officers'. I think it was really great. I've never seen so many happy homeless people next to so many happy cops at the same time."

Officer Colon seconds that. He said his bowling game was "below marginal," but you couldn't tell from his face.

"Smiling and playing is good therapy. That's pretty much what I can come up with. It's great therapy," Colon said.

Service said the event raised $3,325 from food sales, a silent auction and donations. All of the gifts will go to the Glory Hole shelter.

This story was republished with permission from KTOO.org.