A month before he died, a beloved Anchorage bartender met his daughter 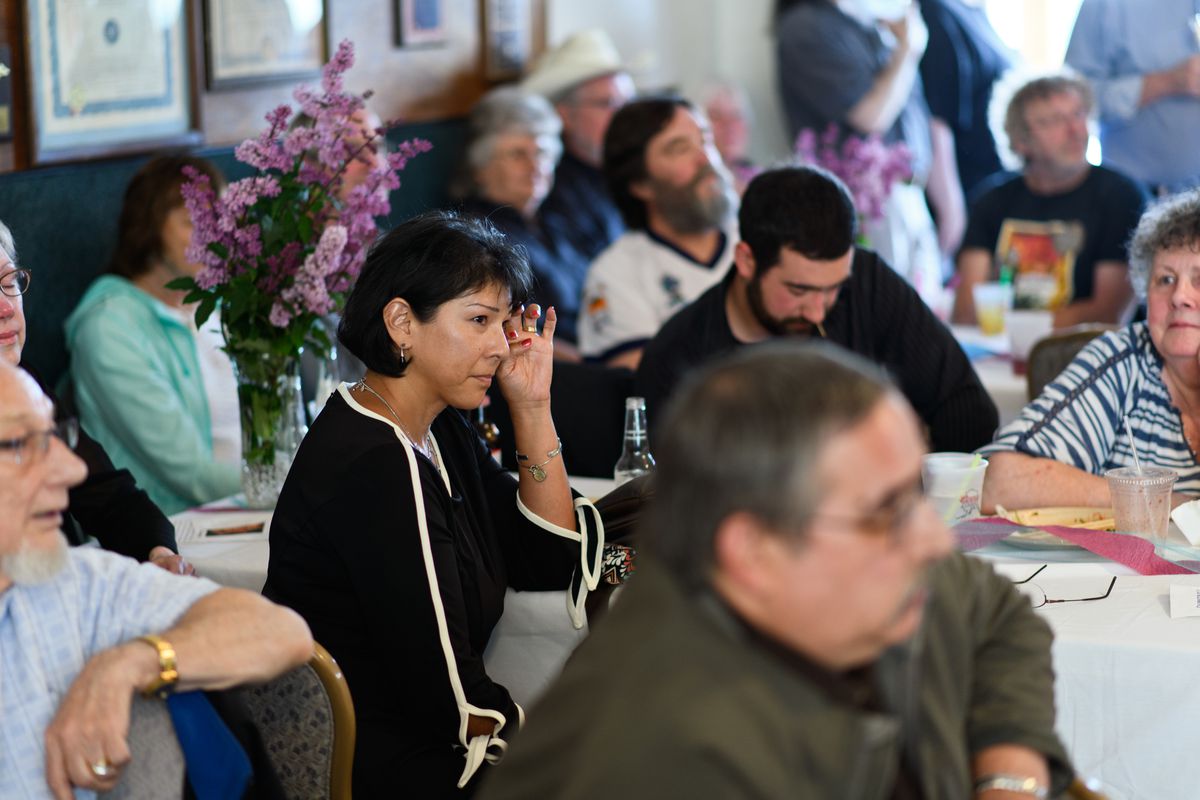 A couple hundred people gathered Thursday evening at American Legion Post 1 to share memories of one of Anchorage's most popular and beloved bartenders.

Izzy Cordova held court at the old Cheechako Bar on Fireweed Lane for 33 years. If you knew him, you knew he poured a sturdy cocktail, was generous to a fault and could be as bawdy as he was kind.

And you knew he was gay. Proudly, loudly gay.

Imagine his surprise, then, when in the weeks before his death at age 76, a DNA test revealed he had a daughter from a 1964 tryst while stationed in Japan during the Vietnam War.

Impossible, Cordova said when first presented with the possibility — although he said it far more colorfully, using language that can't be repeated here.

Cordova, who died on June 1, met 53-year-old Kathy Kight on May 4 in Anchorage. Kight spent three days in Anchorage before returning to her family – a husband, three children and six grandchildren — in Fernandina Beach, Florida.

Before she left, she promised to return next summer, and to bring some of those children and grandchildren with her.

She was back sooner than expected. Two weeks after he met the daughter he never knew he had, Cordova was hospitalized after suffering a fall. He died several days later.

Kight and her husband were part of the crowd at Thursday's celebration of life, where people filled the rooms upstairs and flowed onto the balcony and lawn below.

Mimi Silveira, a longtime friend of Cordova's, fought back tears as she told the crowd about Cordova's discovery of a daughter. There was a low gasp from a crowd well-acquainted with Cordova's sexual orientation, followed by applause.

The union of father and daughter was a magical convergence of an adopted woman's curiosity, science and advertising.

"I was blown away," said friend Russ Reno, who was among those who helped bring Cordova and Kight together. "Can you imagine after all of your life?

"… (A few) weeks before he died he learned he had a whole family,  and he never knew about it. He would've spoiled those kids. He loved kids. He was a kid himself."

Kight said the quest to find her biological parents was aided by her Japanese birth certificate, which named her biological mother. A couple of years ago, she traveled to the Japanese prefecture where she was born and examined birth registries, which led her to the maternal side of her birth family. Her mother died in 1972, but she learned she had five siblings and met some of them.

That solved half of the mystery. Kight, who was born in 1965 in Kamakura, Japan, learned her father was an American sailor who had been stationed in nearby Yokosuko (the same place where, somewhat astonishingly, Kight's husband was stationed years later). But no one in Japan knew the name of her father.

Kight said she had about given up when one of those ancestry.com commercials caught her attention.

She submitted a swab of her DNA last year. About a year before, the children of David Reeves – Cordova's half-brother – had given their dad a DNA testing kit for Christmas. Soon Kight got a response saying it was "probable" that Reeves was her dad or uncle.

The details of David Reeves' life didn't converge with Kight's birth, but Cordova's did. He joined the Navy in 1962 and was stationed in Yokosuko.

Eventually Kight called Cordova and explained the results of her sleuthing.

Silveira was among those who pushed Cordova to submit his DNA. Her history with Cordova goes back to when she a young girl and her dad would take her with him to Pal Joey's, an old Anchorage bar where Cordova first worked.

As Silveira grew up she and Cordova became close friends, and she remembers him telling her that he didn't have his first relationship until he moved to Alaska after his honorable discharge from the Navy in 1966.

"Back then I think it was hard for a gay man to admit he had been with a woman," she said.

During his decades in Anchorage, Cordova created his own family. He loved to cook, he loved to entertain and he took good care of his Cheechako regulars.

At Thursday's gathering, a table where a guest book sat contained various memorabilia of his life, including a rugby ball – the Cheechako was the go-to place when there was a rugby tournament in town – and a plaque proclaiming him the 1999 Anchorage Press bartender of the year. Between the Press and the Daily News, Cordova won several of those awards.

"He used to take care of us girls," recalled Sharon Gravely, who used to go to the Cheechako with her Long's Drugs co-workers. "He wouldn't let any of the guys try to pick up on us. He was a good man. A good person. I can't think of enough good things to say about him."

Ron Berger, another longtime friend who spends winters in the Lower 48, said Cordova liked to write letters. Berger got a big laugh Thursday when he read a quote Cordova had included in one letter: "Everything I like to do is either illegal, immoral or fattening."

Later, Berger spoke of Cordova's kindness. If a customer was too drunk to drive, Cordova would collect donations from other customers so he could call a cab.

"Then he'd reach into his pocket for a couple dollars so the driver would get a tip," Berger said.

Cordova's death is the latest among a generation of longtime bar and restaurant characters in Anchorage. Dick Sanchis of the Arctic Roadrunner, Jim Bookey of Wee B's and George Brown of the Lucky Wishbone have all died in the last year or two.

"Over the years there have been some of these people who have left big footprints in Alaska," Berger said.

Cordova was one of them. Among those who shared stories about him Thursday was Clara King, another of Cordova's Cheechako regulars.

King forgot what else she wanted to say, blaming it on a senior moment. One or two speakers later, she stood up and spoke without the benefit of a microphone.

"I remember what I wanted to say!" she said. "He made the best Brandy Alexander of anyone!"

Kight, who bears a striking resemblance to Cordova and shares his flat feet (the reason he joined the Navy instead of the Army), said listening to stories brought her closer to her dad.

"I can carry them right here," she said, touching her heart. "He's something else. I feel very blessed to have gotten to meet him."