An Anchorage newborn was abandoned in a cardboard box. More than 30 years later, he found his biological father. 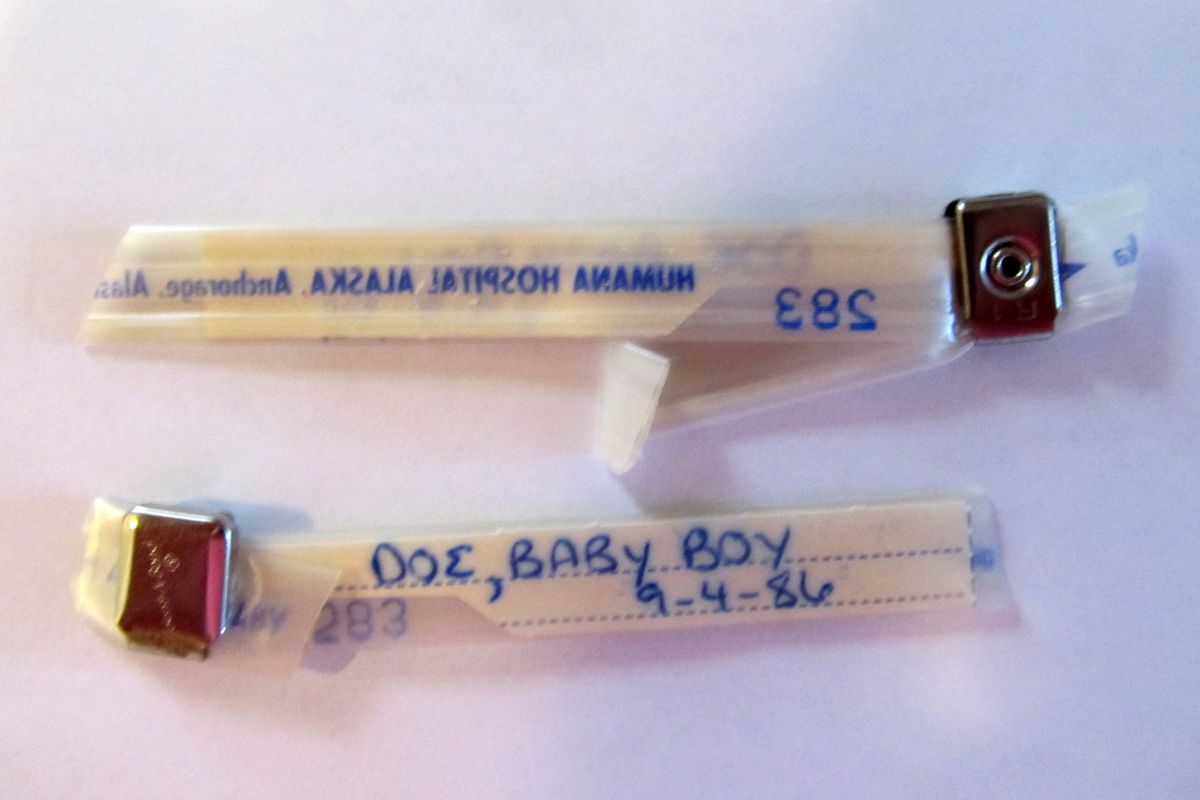 Benjamin Tveidt still has the hospital bracelet he wore after he was found as a newborn baby abandoned in a box in Muldoon. (Photo by Benjamin Tveidt)

Benjamin Tveidt still has the hospital bracelet he wore after he was found as a newborn baby abandoned in a box in Muldoon. (Photo by Benjamin Tveidt)

Benjamin Tveidt was the "baby in a box" — the newborn found tucked in a cardboard box outside an Anchorage thrift store on a late summer night in 1986.

Teenage bicyclists found him — maybe minutes, maybe hours — after he'd been dropped off outside a Salvation Army store on Muldoon Road. The story made headlines in Alaska, and the baby was soon adopted by a loving family.

As he grew up in Idaho, the central mystery of his life gnawed at him: Who were his parents? Who was he?

"This was the ultimate question in my life," he said.

In 2016, he decided to tell his story to the Anchorage Daily News, in hopes that it might help him find his biological parents.

Tveidt, who lives in the Boise, Idaho, area and works for the Idaho Army National Guard, knew the chances were slim: He'd been found with no identification. Thirty years had passed.

"I had nothing to lose," he said recently. "And everything to gain."

Against all odds, the article set in motion a chain of events that led a national TV news program to help Tveidt find his biological father — and identify two Anchorage-area women who a genealogist believes are his aunt and mother.

Tveidt's story published in the Daily News, then called Alaska Dispatch News, on May 17, 2016. Within weeks, national media had contacted him.

Producers at ABC's long-running news magazine "20/20" wanted to connect him with Cece Moore, who bills herself as a genetic genealogy expert.

He was Richard Blanchfield, 78, a highly decorated Vietnam veteran.

It turned out that Blanchfield, who had two other sons, was living in a beachside California town just minutes from where Tveidt was filming with the "20/20" crew.

"When he opened the door — it was amazing," Tveidt said.

"His eyes — it was like looking in the mirror of my own eyes. Looking at him, I could really connect with him, even before talking."

The backstory of his birth

In his father's home, Tveidt learned the backstory of his birth: Blanchfield told Tveidt that he'd been a civilian employee of the Army in Anchorage in the mid-1980s, working with veterans.

One night, he'd stopped at The Cabin Tavern on Muldoon Road for a beer and ended up going home with a woman. After a one-night stand, they parted ways.

Until the producers from "20/20" called, Blanchfield had no idea a son had come from the encounter.

He told Tveidt he would have kept him and raised him if he'd known.

Tveidt saw that his father used jokes to diffuse tension — just like him. They had service in the military in common.

The "20/20" producers also wanted to reunite Tveidt with his biological mother.

Moore, the genealogist, had used genetic family mapping to narrow the possibilities down to two sisters. Both live in the Anchorage area.

In September, Tveidt came to Alaska to film the segment for the show. He tried to call the women.

The younger sister "swore up and down that she didn't have anything to do with the events" of Tveidt's birth, he says. She refused to meet him in person, even without cameras or recording devices.

After they got off the phone, the woman's older sister called, Tveidt said. She too denied having anything to do with Tveidt's birth.

She ended it by telling him to go home and love the family that raised him — and never to contact her again.

"It was a lot less pleasant conversation," he said.

Tveidt has looked at the older sister's pictures on Facebook. The resemblance is uncanny. That, combined with the DNA, makes him believe she is probably his biological mother.

He says the woman's rejection is "the dark side" of the joy he felt at finding his biological father. But he's still glad he went through the process.

Today, Tveidt and his biological father are forging a relationship in phone calls and letters.

Blanchfield clips newspaper articles about veterans issues and inspirational stories from Christian magazines and sends them to his youngest son.

Blanchfield didn't want to be interviewed for this story, but said, through Ben, that he's "very pleased about the outcome of this little journey."

Tveidt says having answers to the lifelong questions about his origins has afforded him a new sense of solace.

He wants to come back to Alaska, the place where it began.

The ABC News program "20/20" will broadcast Tveidt's story Friday. The show airs at 9 p.m. in Alaska.