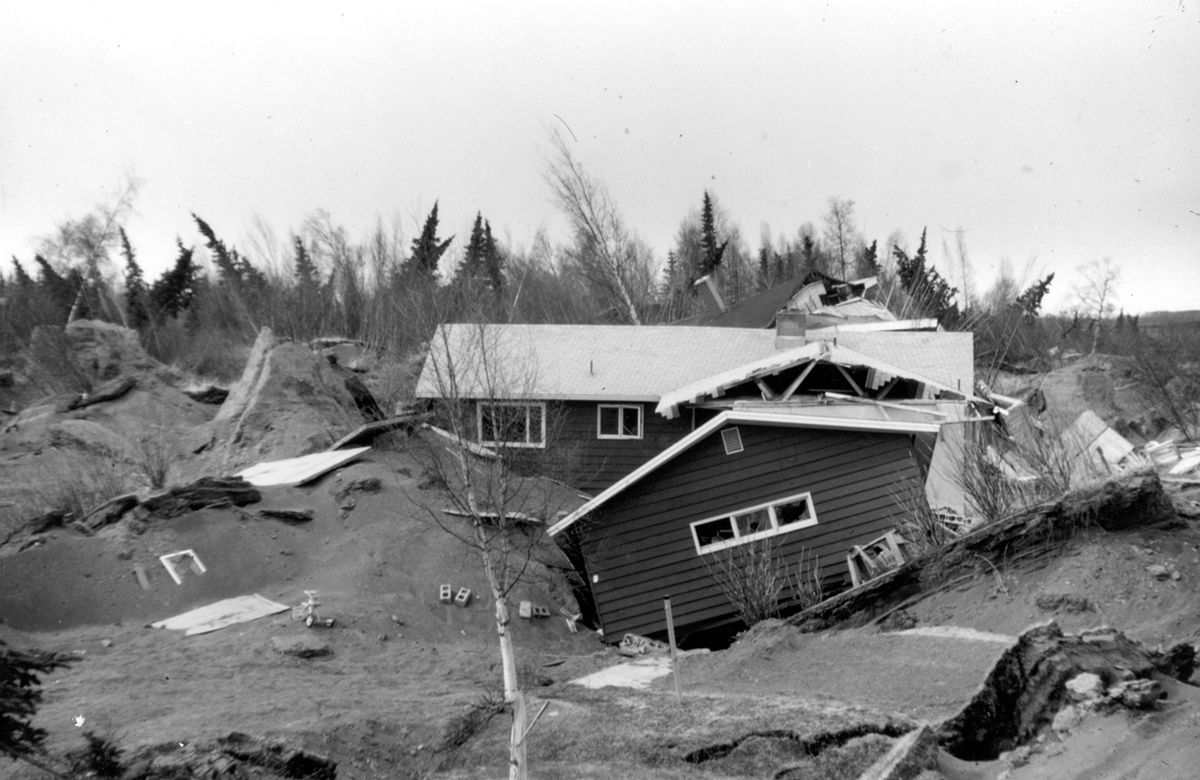 A home in Anchorage lies in ruins after the 1964 earthquake. (U.S. Geological Survey)

A home in Anchorage lies in ruins after the 1964 earthquake. (U.S. Geological Survey)

Many times over the past week I’ve thought about a woman named Wanda Wright who I interviewed in 2014. She was in her mid-80s then, 50 years after the big earthquake.

Wright lived on Chilligan Drive in Turnagain. On March 27, 1964, just before 5 p.m, she had the car packed. She wanted to take her children to Hatcher Pass but she was waiting for her husband to come home from work. He was late. The kids -- Perry, 12, Penny, 8, Paul, 4, and Merrell, 2 -- were inside watching television. She decided to run to Bert’s Drug Store on Fourth Avenue.

She’d special-ordered Easter presents for her boys, she remembered, little cars that went on rails.

Put your body back into that moment on Nov. 30, when you realized it wasn’t going to be a regular earthquake. Then imagine an exponentially stronger one that lasted four to five minutes. Now think about Wright’s state of mind when the shaking stopped, weaving home through ruptured asphalt, down Northern Lights and finally turning onto her own street, a ritual we all make, coming home. But this time, her house had disappeared. The quake cleaved off the driveway. A trail of debris led down a three-story cliff and out into the muddy flats of Cook Inlet. Two of the children survived, having climbed on the family car. The bodies of other two, Perry and Merrell, are still beneath the soil of what is now Earthquake Park.

That earthquake, magnitude 9.2, was one of the strongest the world has ever seen. If you look carefully, you can still see its physical imprint all over Anchorage. I’ve taken my children to play at Sunset Park in Government Hill, its grassy slope the remnant of a landslide that destroyed an elementary school. Last week, I dropped my son off at the home of a neighbor on 11th Avenue. Their house was built on the site of a house exploded by a 1964 quake-caused gas leak.

[Full coverage of the November 30 earthquake]

Lately, I’ve been thinking about that earthquake’s less obvious imprint, the one on our culture. What does it mean to live in earthquake country? Are there ways that we are wiser or more afraid?

Some piece of it is about our collective memory. We know, as a community, what real devastation looks like, even if it’s mostly in the distant past. Uncle Tommy, who is in his 60s, seemed genuinely rattled after the most recent quake. He told me he’d been in his garage, cleaning up a smashed soup tureen that had been launched off a shelf, when he was hit by a memory. He’d been in a kitchen in a house in Turnagain in 1964, a child, watching an adult trying to hold the cabinets shut as the house rolled from side to side. She couldn’t manage it, he told me. And he’d seen the dishes from opposite sides of the kitchen collide in midair. It sounds slapstick when I write it, but the way he said it wasn’t funny at all.

My mother was a teenager in 1964 when she watched JC Penney collapse. One person died. When I found myself in an icy parking lot on Nov. 30, trying to process as my office building jerked and rattled in front of me, my mind filled with things she told me. Move away from the building. Watch those windows. Look for cracks in the asphalt. You will be in shock afterward. Be careful about gas leaks. There will be aftershocks. They are just aftershocks.

I immediately went back in the office and started working. It wasn’t until days later, after a 90-minute yoga class, that I realized how full of adrenaline I was. Friends weren’t sleeping. A massage therapist told me about a client who wouldn’t lie down on her table without talking through an escape plan. I heard a story about another woman screaming in a public meeting when a tremor rumbled through.

There are theories that people pass trauma from one generation to another in the coating of DNA. Who knows if the experience of the ’64 quake marked my generation in some way, making us more resilient or susceptible to stress, but as aftershocks jolted the conference table in my office and sent a ripple of concern through my grocery store aisle, I took note of my elevated heart rate and the heat in my chest. Just an aftershock, yes, but I was rattled, too, along some deep fault in my subconscious.

My mind kept going back to that part at the end of Wright’s story, the image of a woman arriving home to the life she’d left minutes before on a regular day, doing a routine errand, to find everything vanished and her children lost. Her neighbors' homes, the ones just across the street, remained intact. Some of those houses are still there. I remember her telling me that detail. How surreal it was to think the structures we have in place can’t protect us, she told me. Our lives are so fragile and more precious than we often think about, caught up in the regular errands of regular days, she said. Maybe, living in earthquake country, we understand that more intimately. Especially now when the ground keeps rattling, just when we think we’re safe.

The last big aftershock happened when I was in church on Sunday at Saint Mary’s Episcopal. It was 4.8, and it came just about the time the Rev. Michael Burke was breaking bread above the altar. There’s nowhere to hide, really, in that church, with big windows all around. I held tight to the pew and fixed my eyes on a speaker attached to the ceiling, vibrating hard. When the shaking stopped, Burke didn’t go back to the order of service. Instead, he quieted the sanctuary. Then, together, we prayed.