‘We just haven’t grown up yet’: A love of elaborate Christmas villages unites these Alaskans 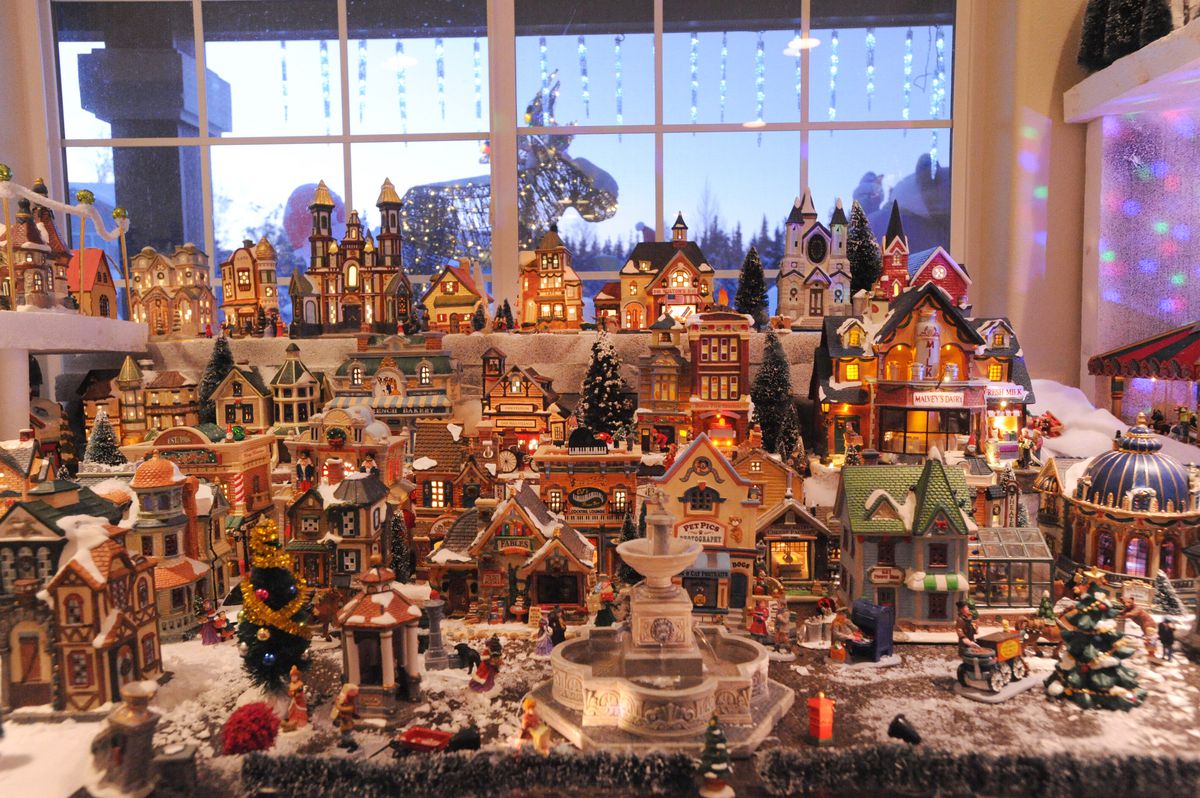 Nate Baer never thought he’d be the person with a Christmas village inside of his Anchorage home.

But then he and his wife had a daughter, Gracie. A family friend who owned a local frame shop offered to sell Baer a handful of miniature buildings at a steep discount.

“He’s like, ‘Gracie needs a village.’ So I went and bought the village and just kept adding on from there,” Baer said.

The hobby fell into Baer’s lap. He latched on. Over the past seven years, his tiny village has exploded into a quirky, full-blown winter community. Baer is also one of about 30 people in an Anchorage-area club for Alaskans who share a penchant for elaborate Christmas villages.

“I think it brings the magic back to Christmas a little bit,” Baer said Monday as he looked over the colorful village in his family’s Hillside home.

Baer and Gracie, now 8, pointed out some of their favorite parts of the Christmas village, like the seven gnomes sprinkled throughout the buildings. There’s also the papier-mache ski slope and the Spenard Christmas market. There’s the fire station with a campfire on its roof. (Baer perched the campfire up there. It’s just kind of funny, kind of ironic, he said.) There’s the farm where a wolf has toppled a pig. (That’s Gracie’s doing.) Then there are the iconic Alaska bars that Baer is building out of wood: Homer’s Salty Dawg Saloon, Anchorage’s Chilkoot Charlie’s and the Bird House, an old bar that burned down in 1996.

Maybe one year, Baer will have a row of Alaska bars, or maybe he’ll fold a scene of Halibut Cove into the village, or maybe the little buildings will eventually fill an entire room in the family’s home — much to his wife’s chagrin.

“It does bring the kid out in you,” he said about the annual village creation.

“Every year, it takes more and more time, which ends up being more sleepless nights,” Baer said.

In Eagle River, 186 buildings make up a village in Laura Warrell’s basement.

Warrell and her husband, Jim, started collecting the miniature, intricate buildings about 20 years ago. They thought it’d be a fun tradition to start with their children, she said. Their kids never really got into it, but the Warrell couple did. They added a few pieces to their collection each year. They put up their village together each winter.

“Every time you bring out a building or put it away, you see something you haven’t seen before,” Warrell said. “It’s just so much fun.”

Warrell is what the Anchorage club refers to as a “purist.” She only collects pieces made by a Minnesota-based company, Department 56. The pieces can be pricey, but for Warrell, they’re worth it.

Warrell and her husband, Jim, last put up their collection in 2016. It took them about three weeks. Jim died later that year. Warrell hasn’t disassembled the Christmas village since.

“It’s hard for me to take it down because it’s the last thing we did,” she said.

When a magnitude-7.0 earthquake violently shook Southcentral Alaska on Nov. 30, a train derailed in Warrell’s village and a few tiny trees tipped over, but the expansive miniature town remained largely unscathed.

In Anchorage’s Sand Lake neighborhood, Frank and Jeanne McQueary’s Christmas village is a patchwork of memories.

“Everything has a story to it,” Jeanne said.

Underneath their Christmas tree, buildings sat on tiers constructed out of plastic foam and wood. Trains chugged around the village. There were cardboard buildings that belonged to Jeanne’s parents and a nativity scene a grandson crafted in kindergarten. He’s now in college.

The McQuearys have set up their Christmas village for at least 20 years.

“We just haven’t grown up yet,” Frank said, punctuating his sentence with a laugh.

“You turn the lights off and you turn on the tree, and it’s hypnotic and it’s relaxing,” Jeanne said. “We enjoy it.”

The McQuearys and Warrell are also members of the Anchorage-area Christmas village group, “The Village People: Arctic 56 Collectors Club.”

The group started in the early 1990s, Warrell said. Its members design displays for The Children’s Hospital at Providence, hold contests and have an annual tour of each other’s homes to see the villages.

The club is largely made up of retired Alaskans, Jeanne said, but they’re hoping to get younger people — like Baer — to join and carry on the traditions.