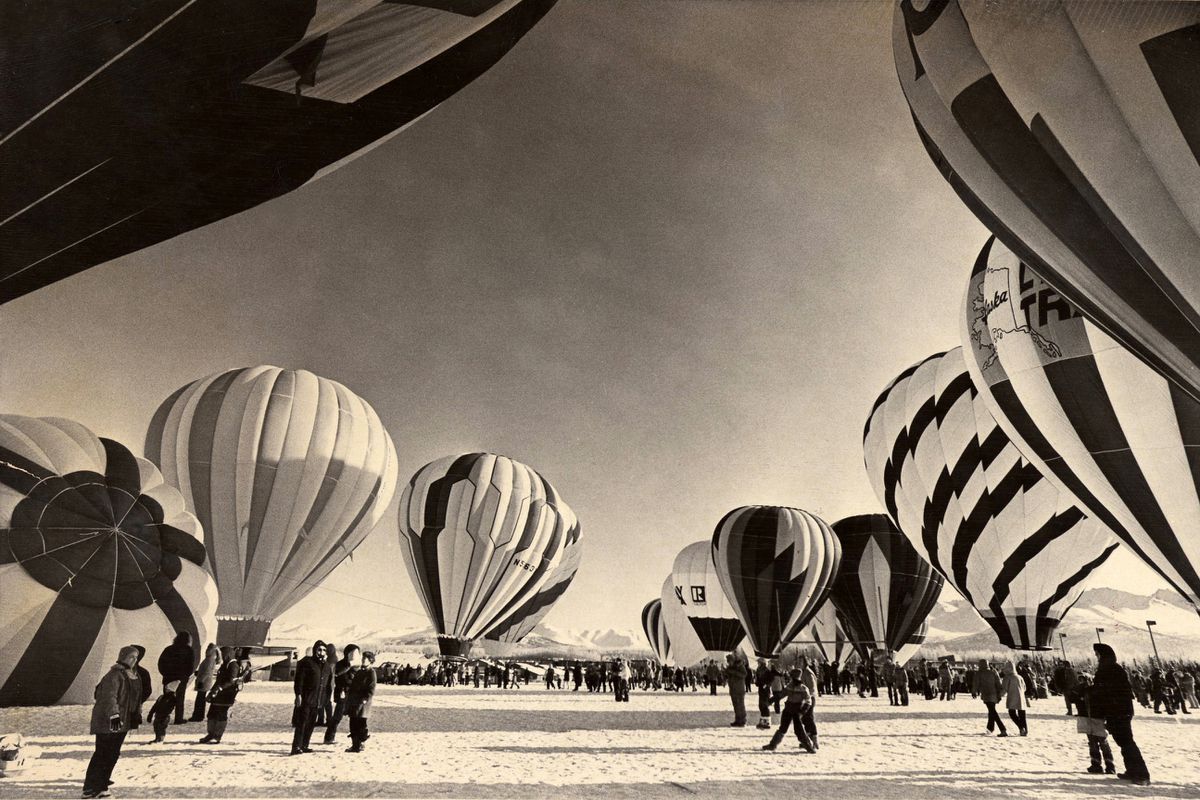 A few Fur Rendezvous traditions have stood the test of time. The blanket toss has been a staple of the festival since before statehood, and the Beard and Mustache Competition will celebrate its 69th appearance this year.

But whatever happened to some of the old Fur Rondy favorites, like the Fur Rondy Grand Prix or the hot-air balloon aerial display over Westchester Lagoon?

Since Fur Rondy’s unofficial start in 1935, events have come and gone for different reasons. Some disappeared because of declining budgets, others were killed due to weather or a lack of interest — and at least one was forced out due to a change in Alaska law.

Monte Carlo Night was a festival favorite in which attendees could purchase fake money and play games like poker and blackjack, with prizes as the winnings. The fundraiser significantly helped with the expenses of other Fur Rondy events.

John McCleary has worked with Fur Rondy since the ‘70s, serving on the board since 1985 and becoming executive director in 2016.

He said Monte Carlo Night ran from 1974 to 1995 and anywhere from 2,500-3,000 attendees would fill what is now an ACS maintenance warehouse garage off of 40th Avenue. Some people would come dressed in Gold Rush-themed outfits as miners and saloon girls.

According to a story from the Associated Press published July 7, 1995, Fur Rondy collected $45,000 from Monte Carlo nights. McCleary said after expenses, it amounted to $30,000 in revenue for the organization.

But a change in Alaska’s gambling laws in 1995 banned Monte Carlo night fundraisers for all nonprofits, including Fur Rondy. They are still illegal today.

That meant some tight budgeting for the nonprofit, McCleary said.

“Depending on weather, registration, ticket sales and pin sales we can make budget and have a positive small net profit or we can be into a deficit budget loss,” McCleary said. “The $30,000 net loss after the state legislation immediately placed Rondy into the deficit of $30,000 going into the following year without the variables above.”

Lacking the popular fundraiser, McCleary and the Fur Rondy committee wondered what events could help fill the gap and which events they might have to cut.

In the late ‘50s, racing Porsches, Corvettes, VW Beetles and Camaros on Sand Lake was a popular pastime of the Alaska Sports Car Club. By 1961, the event became part of Fur Rendezvous and was moved downtown from 1966 to 1972.

Rozanne Timbes’ mother, Polly Johnson, first had the idea of creating the club in the ‘50s. The Alaska Sports Car Club was founded before statehood, in 1958.

“Polly was always doing something,” Timbes said in an email. “I know she met people through bowling and work, who had similar interests. (In 1955 or 1956) she had the idea of creating the club and then broached the idea to the guy. If I remember correctly, except for her the rest of the members were men.”

After a five-year hiatus, the Grand Prix started up again in 1977; McCleary says it ran until 2009. The racers would begin at the train station on First Avenue, continue down Christensen Drive, turn on Third Avenue and end at the depot.

Wally Hopkins was part of the original Alaska Sports Car Club. He served as the chairman of the Fur Rondy Grand Prix for 12 years and on the Fur Rondy board of directors for eight. In 1985, he raced in the 24 Hours of Daytona, one of the largest endurance races in the world.

Hopkins said there were hundreds of people who helped organize the Fur Rondy Grand Prix. The Municipality of Anchorage street maintenance crew would form the race track, haul in the snow and bank it with the help of club members.

Hopkins says he’s seen overhead photos and crowd estimates of over 8,000 people watching throughout the course.

But despite strong attendance, sponsorships for the event were dwindling. Then, Fur Rondy was required to reinforce corners with jersey barriers behind the snow, another unexpected expense. Another nail in the coffin: the municipality’s budget shrank, as did its contributions for the Grand Prix.

Without the municipality’s financial support, McCleary says it was $64,000 to cover expenses.

“We, Rondy, we had other costs that we had to cover and with the lack of sponsors, we just couldn’t continue the event,” McCleary said. “We had to make some very, very hard decisions in terms of what we could continue to support.”

In 1975, Michael Bauwens moved to Anchorage and bought his first hot air balloon.

But, Bauwens wanted to get a bigger balloon with colors he liked, so he went to a cable company in Anchorage and offered them a deal. In exchange for paying for his balloon’s expenses, Bauwens would fly their logo across town whenever he went for a ride.

“I flew that balloon all over town,” Bauwens said. “It said Visions on it, and it got tons of press. Anchorage attitude was great. The newspapers every month would shoot a picture of the balloon — just a beauty shot on the front page.”

Bauwens met other Alaskans interested in hot air balloons; some even bought their own balloons so they could all fly together. Starting in 1978, the balloonist group Alaska Air Mushers would mount a hot air balloon aerial display over Westchester Lagoon for Fur Rondy.

A year later, balloonists would “race” from East High School to Russian Jack Elementary School, the Cartee Softball Fields and eventually land by Dimond Boulevard and the Old Seward Highway. On a good year, McCleary says there were about a dozen balloons in the air.

“Fur Rondy was a natural because of the weather,” Bauwens said. “It was just really cool being together and then having a crowd there. We were just busy flying, that’s all we were doing.”

But over time, the cost of flight insurance for balloonists shot up and, eventually, no one could afford to fly.

After only four balloonists participated in 1986, the event was canceled, according to an Anchorage Daily News article published Feb. 15, 1987.

“The insurance got to be unobtainable,” Hopkins said.

And even though the insurance eventually came down, another issue arose: no space.

“The landing zones went away, and the Dimond — the backside of the Dimond Mall, with WalMart and Gallo’s, it just disappeared,” McCleary said. “That was the doom.”

Bauwens eventually relocated to Utah to become a hot air balloon instructor, but he still visits from time to time.

“Anchorage was without a doubt — I’ve flown a lot of places in the world, and it’s really the coolest flying there is when it’s good,” Bauwens said.

The future of Rondy

In 2006, the board began downsizing. A Dittman Research Poll was conducted by the Municipality of Anchorage and Mayor Mark Begich to identify the strengths and weaknesses of the festival. Some longstanding events, like the Masque Ball (1986-2006) had waned in interest while others, like The World Championship Dog Weight Pull (1966-2013), ended because there wasn’t enough snow in the winter.

“In the late 2000s, we had to retool ourselves,” McCleary said. “We had to really look in the mirror and many of us on the board said, ‘We have to start developing the new Fur Rondy generation.’”

Today, Fur Rondy collaborates with 37 different nonprofit organizations in Anchorage and has created new events that Alaska residents and visitors alike will have a hard time forgetting, like the Running of the Reindeer and Outhouse Races.

“We all want to share our passions,” McCleary said. “We’re addicted to Rondy.”

[From snow sculptures to outhouse races, here are highlights of 2019 Fur Rendezvous]