He was about to age out of the foster care system. Then an Anchorage woman read a Facebook post that changed their lives. 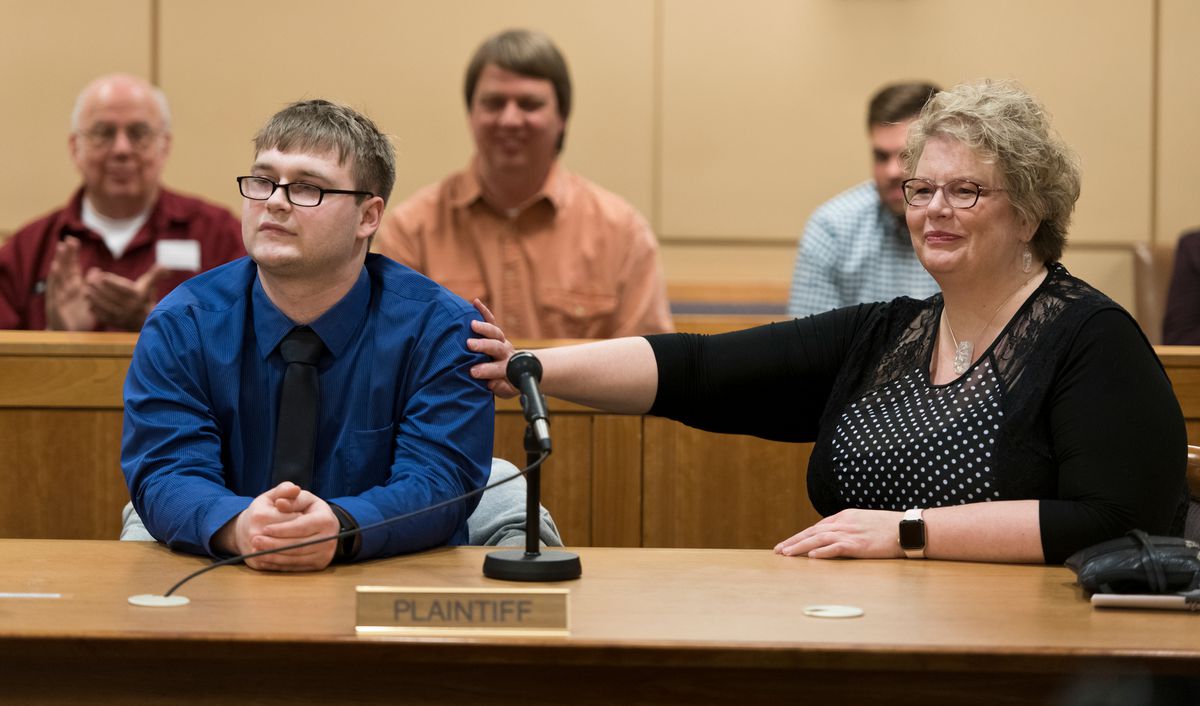 It was an unusual adoption: Hershey was a week away from turning 21, and has been in Alaska’s foster care system for more than half his life. Conter is a 53-year-old bookstore manager who had barely considered motherhood until two years ago, when a Facebook post about a college-aged boy who needed a home changed both of their lives.

In the fall of 2017, Conter, who is single, took in Hershey as a foster son. Gradually, the two decided they wanted to take the legal steps necessary to become a family forever.

The adoption ceremony happened just one week before Hershey would have “aged out” of Alaska’s foster system for good.

In the courtroom, a social worker asked Hershey to explain why he wanted to go forward with the adoption.

An assembled crowd of friends, social workers, lawyers clapped. Afterward, everyone went for pizza to celebrate. Somebody brought blue balloons that said “It’s a boy!”

People don’t hear much about teenagers and young adults in Alaska’s foster care system, much less realize they can still be adopted, said Amanda Metivier of the nonprofit Facing Foster Care in Alaska. But statewide, 68 Alaskans turned 18 in the care of the Office of Children’s Services system in 2018, according to data from the Annie E. Casey Foundation.

Kids don’t stop needing families when they become young adults, said Metivier, who was once in foster care herself. That’s why in Alaska young people can remain in foster care and seek legal adoptive parents until they turn 21, according to Metivier.

There’s a growing understanding of how pivotal those first early years of adulthood are to the trajectory of a life, she said. Because of frequent moves and instability, older teenagers in foster care are more likely to be behind in getting their high school diplomas or achieving life milestones like getting a driver’s license, Metivier said.

And adults need parents too, Metivier said: Young adults aging out of foster care want a place to go home for the holidays, a next-of-kin in case of an emergency, someone who will be as grandparents to their own children in the future, she said.

But some teenagers give up on the goal of an adoptive family.

“A lot of teens get the idea that they are unadoptable and stop searching for a family,” she said.

Looking for a family

Hershey’s time in the system almost led him to give up on that possibility. He was born in Oregon and moved to Alaska with his biological mother, who had married a military man deployed to the state, when he was in elementary school, he said.

Abuse led the state to take custody of him when he was around 8 years old, he said. After that, he’d lived in a series of foster homes and group homes, punctuated by three stints in North Star Behavioral Health Hospital in Anchorage -- including a time he was put there just because the state had nowhere else to place him, he said.

Every time he had to move, he’d pack up his belongings in garbage bags. He kept hoping a family would adopt him, even as he neared adulthood.

For her part, Conter didn’t see herself as mother material. For decades, she had worked brutally long hours at a series of demanding jobs managing major retail stores like Toys R Us and most recently Barnes & Noble.

“Becoming a foster parent was something I thought of -- but I always thought it would be little kids, which, as a single business woman, that wasn’t going to work,” she said.

In her early 50s, Conter found herself thinking more and more about family.

Then she saw a Facebook post by Les Gara, a former Anchorage lawmaker who has long advocated for youth in the foster care system. Metivier said she’d passed along the information to Gara because he has a wide reach on social media -- 4,000 people or so.

The post said an older teenage boy needed a family. Would any potential foster parents be willing to take him in?

Conter surprised herself by volunteering. She went through the process of becoming a licensed foster parent. And in the fall of 2017, a teenage boy moved into her house.

At first, Hershey said, he viewed Conter as not much more than a potential landlord.

“I was skeptical because I was like, oh great, another foster home," he said.

Bit by bit, they got to know each other. Hershey appreciated Conter’s blunt, no-nonsense manner. When he got his driver’s license and bought a used car, she counseled him on the importance of saving money for unexpected repairs. She told him how to start getting noticed for a promotion at his job at Target. They commiserated about working in retail.

It was not totally smooth: Conter said she blew up at him once for coming home late. And she was unprepared for the mysteries of her almost-teenager’s messy bedroom. When he ran into her garage door while backing out and then figured out how to fix it before telling her, she congratulated him instead of getting angry.

“I told him, everyone in life screws up. The key is knowing how to fix it,” she said. “I said I was proud of him for fixing it.”

But it became clear to Hershey that his foster mom didn’t view her role as a job, he said. She didn’t care when they went over the state voucher money provided to buy him clothes.

“The universe set this up”

Within a month, Conter started thinking about making the arrangement permanent.

“About a month in, I thought wow, I think I want to adopt him but I’m just going to be quiet,” she said. “That’s pretty epic after a month.”

It took about nine months for Hershey to get there. Eventually, he told her he wanted to be adopted. There was a moment signing the papers where he felt a stab of sadness and regret about his biological sisters and grandmother, who live out of state. He didn’t want to make them feel bad by choosing a new family.

“It almost made me back out,” he said. "I didn’t want to make them upset. But then I thought about it, and I thought no -- this is good for me. I have to do this, for me.”

Hershey continues to live with Conter while working at Target and saving up to buy a duplex. Conter is encouraging him to learn plumbing and electrical skills so he could someday buy and manage properties.

To both of them, coming together as a family feels meant to be.

“The universe set this up,” is how Conter puts it.

For Hershey, it feels like he finally has a mom. People have even pointed out that they look alike.

“We were talking about reincarnation or something like that," Hershey said. "She said, I honestly think you and me were family in a past life.”