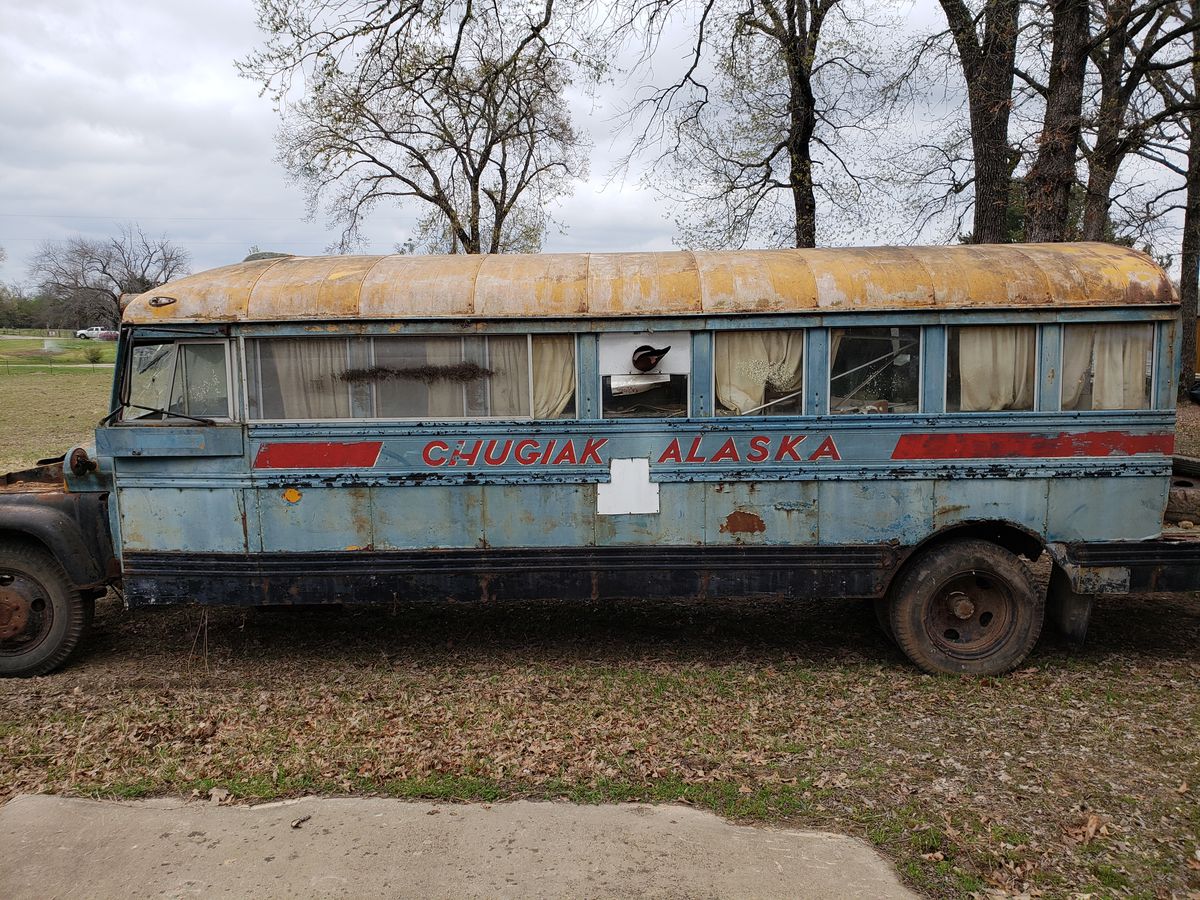 This 1961 Chevy bus was found in a field in East Texas in 2019 with the words "Chugiak, Alaska" on its side. The bus was originally brought to Alaska in 1971 and later used for several family trips up and down the Alcan. It was sold in the late 1970s to a family that needed it to return to Alabama, according to former owner Jinny Kirk. How it ended up in Texas remains a mystery. (Photo by Darin Swift)

This 1961 Chevy bus was found in a field in East Texas in 2019 with the words "Chugiak, Alaska" on its side. The bus was originally brought to Alaska in 1971 and later used for several family trips up and down the Alcan. It was sold in the late 1970s to a family that needed it to return to Alabama, according to former owner Jinny Kirk. How it ended up in Texas remains a mystery. (Photo by Darin Swift)

There’s a broken-down bus in Texas, and it’s got some stories to tell.

In 1971 it rambled from New Hampshire to Alaska, holding itself — and a family — together like a rag used for a makeshift oil cap. It’s the kind of vehicle that makes people fantasize about song-filled family road trips and magic Kodachrome days when seat belts were considered optional and every stranger was just a friend you hadn’t met; the kind of bus that ought to have a name. In its heydey it brought two families closer together, and before it was falling apart may have brought a third family home. It almost went up in flames in 1973 when a stove caught fire in British Columbia, where three years later it (allegedly) saved its owner from a charging family of black bears. It rolled through the redwoods and Hollywood, through the Badlands and Disneyland before finally coming to rest in an East Texas field, where in retirement it dodged tornadoes and became a refuge for rats and rattlesnakes.

Nobody can say how it got there. But through the modern magic of social media, those who remember its glory days have shared the story of where it has been.

Darin Swift was driving down the dusty dead-end road that leads to his home in Fruitvale, Texas, when something on a neighbor’s property caught his eye. A curious old school bus had been pulled from a stand of trees by the new owners. Abandoned vehicles aren’t entirely uncommon in East Texas, but what was painted on the side of the bus surely was.

“I happened to see it, and it said ‘Chugiak, Alaska,’” Swift said.

He did a double-take. The high school teacher and coach grew up in Wasilla, where his family moved in the 1970s during the Alaska oil boom. He went to college at the University of Alaska Anchorage and was plenty familiar with the small Alaska community on the Glenn Highway roughly midway between Anchorage and Wasilla.

“Having spent a lot of my life in Alaska, I knew exactly where Chugiak was.”

Swift said the rust-eaten 1961 Chevy bus was in rough shape. Trees had grown through the floor, snakes and rats had taken up residence, the engine was missing and the interior was gutted. But the neatly painted red letters on the side of the blue bus were too interesting to ignore. The new property owners didn’t know how the bus got there, Swift said, so he snapped a photo and posted it on his Facebook page with a brief message asking if anyone knew where the bus came from.

“Alaska friends, this was pulled out of the woods by my place in East Texas,” he wrote. “Curious if anybody knows something about it.”

Swift’s post spread quickly, racking up hundreds of shares and comments within just a few days.

When Hannah Andrews saw the photo, she was shocked. The bus wasn’t just a curiosity to her — it was a family heirloom.

“OMG! This is our bus!” she wrote on Swift’s post.

Andrews told Swift her father, Andy Kirk, bought the bus in the early 1970s, and she shared a photo of her and her siblings painting the bus red, white and blue for the 1976 Centennial. She asked Swift if a distinctive Arabic word was still painted on the back. That evening Swift got back to her.

“Does this look familiar?” he wrote.

Beneath his message was a photo of a rusty blue bus door sitting on the ground with a single word written in white cursive: Inshallah.

The word — a condensed form of “in sha Allah,” or “if God wills it” in Arabic — was a kind of mantra for Andrews and her family during their rollicking family adventures in the 1970s.

Andy and Jinny Kirk were well-known teachers in Chugiak who took their four children — Kenny, Cathy, Sarah and Hannah — on several epic family vacations down the Alaska-Canada (Alcan) Highway. Because their rickety mode of transportation was often lacking, the kids would recite the word for luck.

“It just became kind of a family saying,” recalled Sarah Kirk, who followed her parents into teaching and is now a writing professor at UAA.

Kirk said her family wasn’t Muslim, or even particularly religious, but her dad taught world religions at Chugiak and liked the word and its meaning.

When Andrews realized the bus was really her family’s, she immediately called the only person she knew whose memories of the bus would be better than hers and her siblings.

“Hannah called me and she said, ‘Mom, get your Kleenex out, you’re going to cry,” recalled Jinny Kirk, who is celebrating her 90th birthday this year and still lives in Chugiak.

The family matriarch was stunned to learn the bus had been found, and seeing photos brought back a flood of memories.

“We had so many adventures in that bus …”

Flight of the Blue Goose

Unbeknownst to the Kirks, the bus had already claimed a place in another family’s lore before it arrived in the Last Frontier. But when she stumbled across Swift’s Facebook post, Nikki Judge said her jaw dropped.

“I was absolutely shocked and flabbergasted that it was our Blue Goose,” she said.

Judge said her mother had always wanted to move from New Hampshire to Alaska. Her father didn’t.

The Judges bought a used school bus, outfitted it with a stove, bunk beds and a fresh coat of robin’s egg blue paint. Her father named it “the Blue Goose” and in the spring of ‘71, the family loaded into the 60-passenger bus and headed north. Even in its better days the bus was a bit sketchy, and the trip took two months. Somewhere in South Dakota its oil cap disappeared and had to be replaced by an old rag held on with part of a hammer.

Judge has fond memories of the trip that brought her family to Alaska during the boom days of the 1970s.

Judge said the bus serves as a reminder of what was an almost idyllic time in her childhood.

“Our family was kinda disjointed, but that summer was a magical summer when we became a family again,” she said.

Trips of a lifetime

The bus didn’t quite make it to Alaska — it conked out in Canada and had to be towed into Alaska later by Judge’s father, who left it sitting behind the Eagle River Tastee Freeze.

That’s where Jinny Kirk saw it parked. Her young family had already taken two road trips down the notoriously bumpy highway linking Alaska with the Outside world, and Jinny wanted something roomier. The bus, she said, would be a major upgrade. She and Andy bought the bus for $500 down with $100 a month due until another $1,000 was paid off (with 6 percent interest).

On the first trip down the Alcan, 14-year-old Kenny’s sleeping bag caught on fire after a camp stove malfunctioned in the campground at Buckinghorse, British Columbia. There were also broken windshields, a dead battery, flat tires and stops to add oil every 50 miles or so. On the way back, Mounties checked the bus “for guns, narcotics, stowaways, or who knows what” at the border.

The family used the bus for trips around Alaska during the next few years as it took on a new identity for Kirk’s students at Chugiak High. The teacher and coach used it as a support vehicle for his summertime bicycle riding “Century Club” on its long summertime rides.

In 1976, the Kirks painted the bus red, white and blue in honor of the 200th anniversary of the signing of the Declaration of Independence. That year they took perhaps the most epic road trip of all in the slow old bus, driving from Alaska all the way to the desert Southwest. Along the way they strolled the Oregon coast, walked through giant redwoods in California, got lost in San Francisco and made stops in Hollywood and the Grand Canyon. At one point Andy had to take refuge in the bus as a family of black bears closed in as he came out of an outhouse.

“That provided fodder for embellished stories told to relatives over the years,” Jinny later wrote in an account of the trip. The problems with the bus were almost endless. It got just 6 miles to the gallon and in the desert it broke down several times — first with a fuel pump issue, later with a burned-out alternator.

“I remember how slow we would go up mountain passes when we went down into granny gear,” she said. “My dad was always concerned whether we’d make it to the top and over.”

But — inshallah — it always made it through.

Other memories are more personal. Sarah said her fondest recollection of those trips is sitting at her father’s feet as he drove. Andy Kirk — who died in 1998 — would recite poems or sing as he drove, she said, and Sarah remembers every line.

End of the road

Darin Swift said he plans to return to Alaska this summer to visit old friends and hopes to make contact with the Kirk family. Although the family agrees the bus is too broken down to try to bring back to Alaska, he said he may try to bring back a piece of it and more photos to share with the people who remember it as a rolling member of the family.

“If that bus could talk it’d probably give us a lot of history,” he said.

In the early ’80s the Kirks sold the bus cheap to a man who wanted to drive his family “back to Arkansas or Alabama.”

“He wasn’t interested in all the mechanical problems, he felt like he could deal with it and that was the last we heard of him,” Jinny said.

She never expected to see the old bus again. Now that it’s been found, she’s more curious than ever about the people who owned it last.

“I’ve always wondered what happened to them,” she said.