Two years after his fall, an Anchorage firefighter is scaling new heights 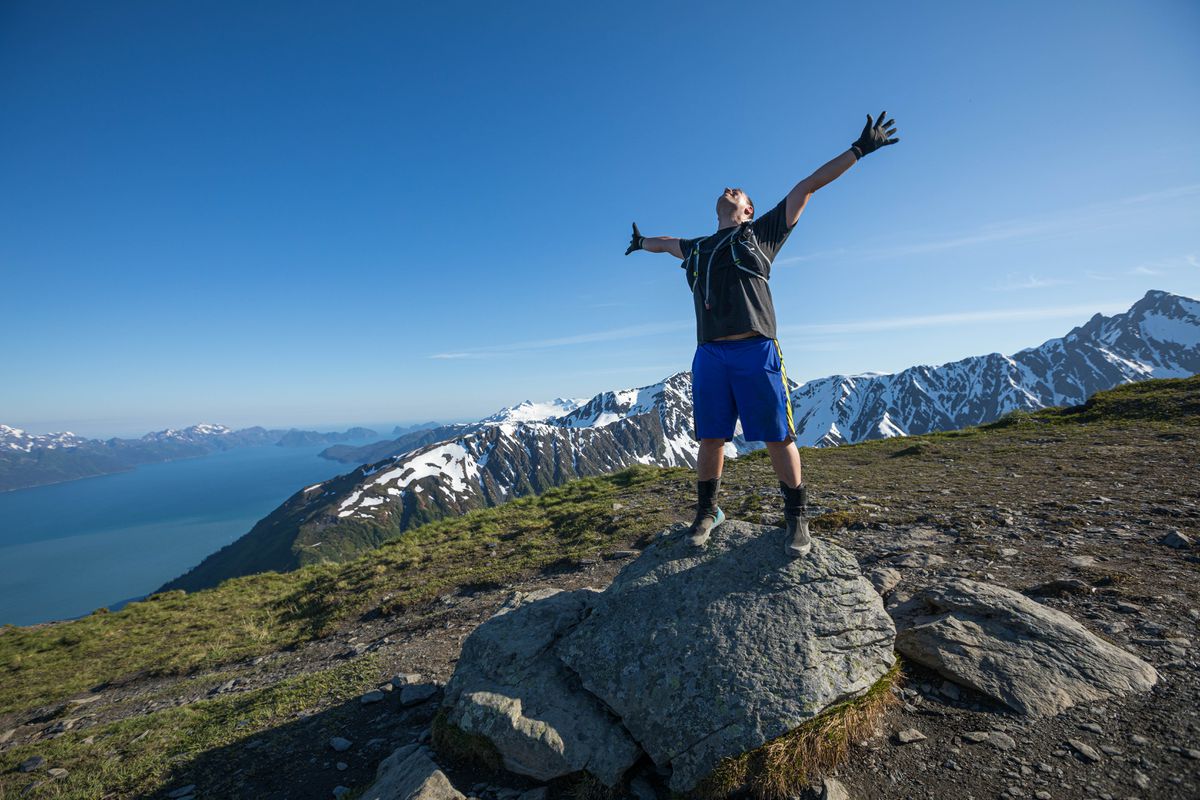 SEWARD – It took two hours for Ben Schultz to make it to the top of Mount Marathon on his initial ascent of the iconic peak here.

Schultz, 30, is the Anchorage firefighter who nearly died when he fell more than 75 feet from the ladder of a fire truck while on duty at Station 5 on June 5, 2017.

He has fake cartilage in both ankles, which shattered when he landed. He’s had surgery 15 times, including six times on his ankles and three times on his brain. He relied on a feeding tube for weeks and had to learn how to walk again.

He spent a month at Providence Alaska Medical Center in a coma, eight months at Craig Hospital in Colorado and three months in an assisted-living home in Nebraska before returning home last May, nearly one year after his fall.

And here he was on a brilliantly sunny day in Seward -- hot, tired, thirsty, dusty and ecstatic. He stretched out his arms as he stood on a boulder 3,022 feet above the town made famous by this mountain, and he drank in a view he thought he’d never see.

Do you believe in miracles? Schultz does, and so does Rob Whitney, a fellow firefighter and experienced mountain runner who is helping prepare Schultz for Mount Marathon, the punishing and often perilous July 4 race.

“An answered prayer and a miracle,” Whitney responded.

Whitney, a former top-10 finisher, took Schultz to Seward on Wednesday to point out various routes and hazards on Mount Marathon’s steep slopes.

In the parking lot at the base of the mountain, Schultz changed into a pair of shoes fitted with braces to support his ankles and took out a pair of gloves.

“You probably won’t need the gloves for going up. They’re more for the downhill,” Whitney said.

A couple of minutes later, Whitney pointed out various routes up and down the mountain -- the roots, the cliffs and “a secret way" to the left of those routes when approaching the mountain.

“No thank you,” Schultz said.

Schultz, who plans to wear a helmet during the race, said he isn’t too nervous about heights in the aftermath of his fall, even though “it would be easy for me to be scared and afraid of that.”

One thing that helped, he said, happened when he was rehabbing at an assisted living facility in Omaha and got a chance to participate in fire-fighting training.

“They had me climb a peaked roof and at the top they had me stand there. It was a good 60 feet about the ground," Schultz said. "(I thought), ‘All right, this feels good.’ I definitely was a little timid, a little nervous. I said, ‘Let’s not come down the fast way.' ’'

Schultz is upbeat and quick to make a joke or laugh at one. A paramedic as well as a firefighter, he is back at work for the Anchorage Fire Department, working at an administrative job on a part-time basis. His job involves archiving historic fire department photos -- a little ironic, he said, given the role photography has played in his life. His father, Jeff Schultz, is the official Iditarod photographer whose work is well-known throughout Alaska.

In order to return to his former job, Schultz would have to undergo more surgery. He has a shunt in his brain to ward off swelling, and he’d have to get it removed in order to use the breathing apparatus sometimes used by firefighters. That could be a long process, he said, because doctors first would have to take steps to see if Schultz still needs the shunt before they could remove it.

That a return to duty is even a topic of conversation is astonishing. Anchorage Fire Department chief Jodie Hettrick said the department thought it had lost Schultz the day he fell.

"We’re just amazed at the progress given the trauma his body has gone through. We’re incredibly proud of him."

Hettrick said “phenomenal care” certainly made a difference, including that provided by coworkers. No one saw Schultz fall but firefighters heard it happen, and they rushed outside to help.

“He was surrounded by people who knew what they were doing and got him to Providence, where again he received excellent medical care,” Hettrick said. “Ben is very resilient, and he’s had the support not only of the department and his family, but the community.”

While Schultz was at Providence, off-duty firefighters took turns sitting in his room so he was never alone. While he was at Craig Hospital in Colorado, his parents, his ex-wife and his children -- Eli, 7, and Nora, 4 -- were often there with him.

Schultz said he was in a semi-vegetative state for nine weeks and in a wheelchair for six months. The first several weeks after he regained full consciousness were the hardest as therapists assigned tasks he couldn’t always perform, he said.

“I was getting pretty emotional because I was beating myself up -- ‘I’m not getting anywhere, I’m spinning my wheels,' ’' he said.

Prayer and faith got him through those rough times, said Schultz, a Grace Christian School graduate who said he accepted Christ into his life at age 5. One day in October, he said, prayer brought him the patience he had been lacking.

“The next day I was still feeling frustrated,” he said, "but I was able to shift from beating myself up to taking a deep breath and saying, ‘Let’s finish this set.' ’'

When Schultz returned to Anchorage last May, he got a hero’s welcome from community members and fellow firefighters.

“The truck I fell off picked me up (at the airport),” he said. “They welcomed me with open arms. To have that was pretty encouraging -- (I thought), OK, we got this. I’m back.”

From there it wasn’t long before he did a three-day hike of the 22-mile Crow Pass trail with a group of kids from Young Life. Over the winter he went skiing at Hilltop. On Saturday, he ran the half marathon at the Mayor’s Marathon & Half Marathon, finishing the 13.1-mile race in just less than four hours and placing 469th among 477 men.

Sometime last winter, Whitney floated the idea of Mount Marathon. Schultz was willing -- and, best of all, able.

“Live life big,” Whitney told Schultz on the drive to Seward. “You gotta go for it, man. You’ve got one life, go big.”

“Every day is a gift,” Schultz said. “All the trauma, all the surgeries, the people thinking ‘He’s not going to survive the night and if he does he’ll be living off a feeding tube all of his life ...’ ”

A couple of hours later, Schultz had reached the mountain top, where there were smiles, high-fives and selfies, and maybe a silent prayer or two.

“It feels so good after spending what felt like an eternity wheeling myself along in the hallway (and thinking), ‘OK, this might be as good as this gets,’ " he said. "It feels so good ... to be able to go up stairs and hike, to backpack Crow Pass and run these races and hike in the mountains again.”