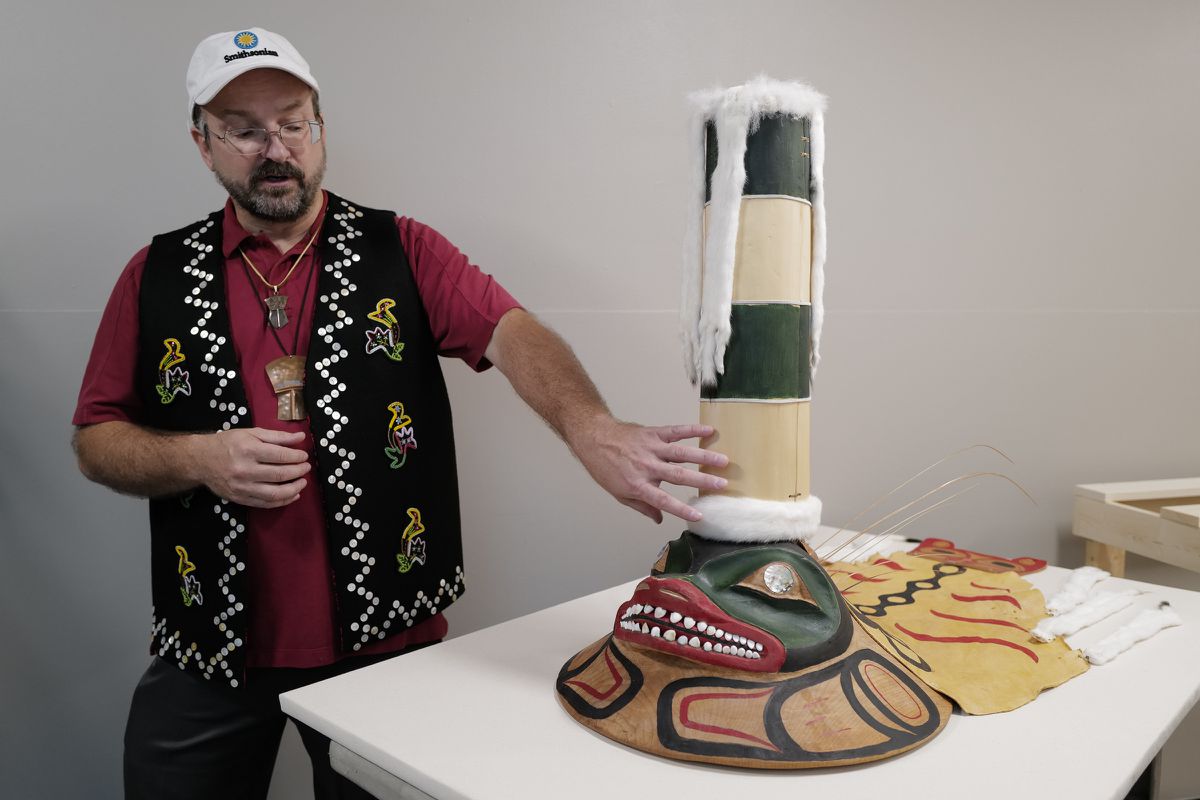 Eric Hollinger, Tribal Liaison for the Repatriation Office of the Smithsonian's National Museum of Natural History, talks about a sculpin clan hat replica before a welcoming ceremony at Elizabeth Peratrovich Hall on Wednesday, Sept. 25, 2019, in Juneau, Alaska. The original hat was collected from the Kiks.ádi Clan in Sitka in 1884. The Smithsonian Institution used a 3D digitization process to document the hat and construct the hat using traditional materials. (Michael Penn/The Juneau Empire via AP)

Eric Hollinger, Tribal Liaison for the Repatriation Office of the Smithsonian's National Museum of Natural History, talks about a sculpin clan hat replica before a welcoming ceremony at Elizabeth Peratrovich Hall on Wednesday, Sept. 25, 2019, in Juneau, Alaska. The original hat was collected from the Kiks.ádi Clan in Sitka in 1884. The Smithsonian Institution used a 3D digitization process to document the hat and construct the hat using traditional materials. (Michael Penn/The Juneau Empire via AP)

JUNEAU — A Tlingit clan hat was welcomed back to Southeast Alaska with ceremony and dance after spending more than a century away.

A ceremony Sept. 25 included both an original sculpin hat that was taken in 1884 from Sitka and became part of the Smithsonian Institution's collection, and a newer replacement hat, which was given to the Kiks.adi clan.

“It’s like seeing an old friend come around the corner when you thought you’d never see them again,” said clan leader Ray Wilson in an interview with the Juneau Empire. During part of the ceremony at Elizabeth Peratrovich Hall, Wilson donned the new hat.

The team-up and technology that led to the new hat and ceremony are unprecedented as far as the Smithsonian is aware.

“As far as we know, it’s never been done before,” said Eric Hollinger, tribal liaison for the repatriation office of the Smithsonian National History Museum. “This is the first time that we’re aware of that an object has been digitally scanned and repaired and a new one made to replace it and be made it into a sacred object.”

The replacement hat was made through careful study of the original hat, 3D imaging and consultation with the clan, Hollinger said.

"It shows what can happen when people work together," Wilson said.

The new hat came to be after Harold Jacobs, cultural resource specialist for Central Council of Tlingit and Haida Indian Tribes of Alaska, noticed the hat was in the Smithsonian's collection, Hollinger and Wilson said.

Jacobs asked if it would be possible for the original hat to be digitized and repaired, Hollinger said. He said at the time something similar had been done to replicate Dakl'aweidi clan hats, and it could be possible.

The Smithsonian got in touch with Wilson and the Kiks.adi clan, who expressed interest in proceeding with the project.

"We began that process with seven years of consultation and work to try to figure out where to get the wood, where to get the funds for it, how to do it, what's the appropriate ways to do it," Hollinger said. "The clan and the several units of the museum, the Smithsonian Institution Exhibits and digitization program office of the Smithsonian worked with the Natural History Museum to acquire the wood and the materials and work with the clan for guidance on how to attach things."

Chris Hollshwander, exhibition specialist and model maker for Smithsonian Institution, who helped mill the hat, was adopted into the Sitka Kaagwaantaan. That was done so the hat maker would come from a non-Raven moiety.

"I think it turned out beautiful," Hollshwander said in an interview. "I've been adopted into the culture and given a chance to do a very special piece."

The newer hat was made because the centuries-old hat is delicate after hundreds of years of wear and tear. Both Smithsonian personnel and tribe members said it needs to be treated carefully and kept in a controlled climate in order to continue to exist.

"The original hat is fragile and can't be danced, this hat is a new functional hat," Smithsonian National Museum of Natural History Director Kirk Johnson said in an interview.

The new hat, which Wilson said will live at a still undetermined location in Sitka, will have staying power in Southeast Alaska.

"Our grandchildren will be using this hat down the line," Wilson said.

While the old and new hats are extremely similar, they are not identical. That's by design.

"The milling (cut) is all the same and based on it, but they wanted to add slightly different things," Hollinger said.

Some of those changes reflect the history of the original hat, which was gleaned in part from a CT scan, Hollinger said. The scan showed evidence of past repairs, which Hollinger said indicated it had likely been around for many years before it was collected in 1884.

"It's hard to tell how old it was, but because it had all those repairs on it, it could have been 100, 200 years old," Hollinger said. "We have no way of dating something from that time."

The carver of the hat is also unknown.

Some of the paint used on the old hat contained mercury, Hollinger said, so it was likely made post-contact — after non-indigenous people and Alaska Natives met. However, he said it's possible it existed in the 1700s, and the telltale paint came during repairs.

The scan also showed areas where sea lion whiskers were likely present, so the new hat has whiskers on one side. The newer hat also includes shell inlay that was not present in the older hat.

At.oowu, sacred clan objects, are considered to have spiritual properties, so a repatriated item is thought to come with the spirits of ancestors attached. Wilson said the old hat's spirits will be retained rather than transferred to the new hat.

“It will have its own spirits, and the old hat will still be as powerful,” Wilson said. “We did ask the old hat if they would treat the new hat like it was his child and he could pass on any information he would want it to have.”

Information from: the Juneau Empire juneauempire.com via The Associated Press