Lost in the years: Nourished by memories, wisdom and moose meat in Northwest Alaska 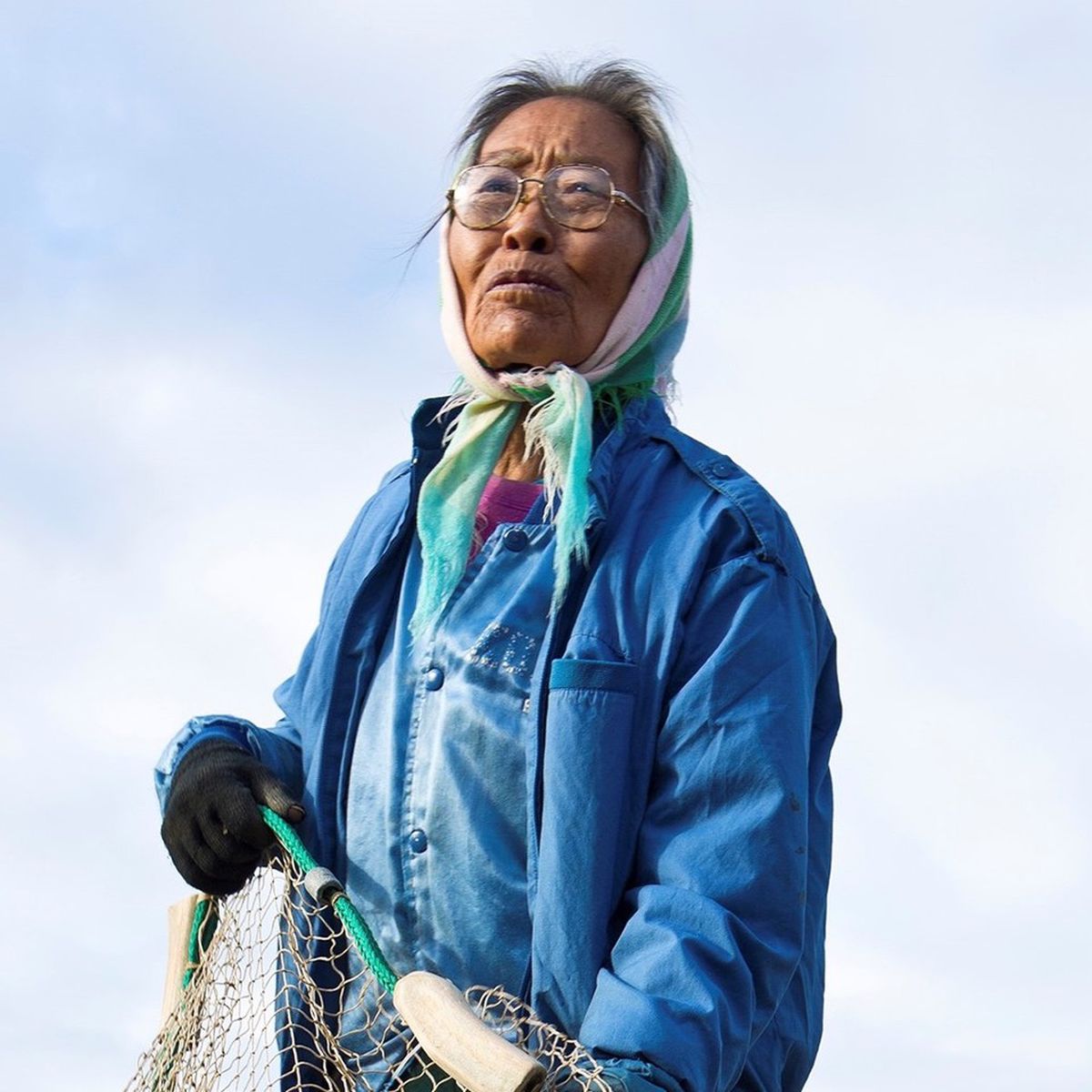 KOBUK RIVER — Recently I heard some happy news, that Nina Harvey of Kobuk had been named the Alaska Federation of Natives Elder of the Year. Right away, memories brought me back to Kobuk village, in August a couple years ago, a rainy spell on the river, and Nina Harvey and her sister Mildred Black inviting me and a friend in for boiled moose bones.

Nina and Mildred are both in their 80s, and they haven’t exactly lived lives of leisure. These days Nina’s house is a modern government-built place, with a bright and cheerful kitchen with fluorescent lights, a fridge, and a sink with hot and cold running water.

They shouted approval when we came through the door. The sisters were sitting across the table from each other in straight-back chairs, old ladies, small and hunched low behind their plates, smiling over huge steaming bones.

Nina gestured toward the stove, and they were pleased when we quickly took plates and moved toward the stove to peer into the soup pot. Right away I spotted sawed leg bones, with big circles of fat patiq (marrow). My mouth started watering and I forked a knee joint out, being careful the big bone didn’t slide off my plate. I reached for my sheath knife, and glanced around for salt.

Mildred is a good storyteller. As she cut at meat and fat, chewing and talking, she told about herself and Nina, as young girls growing up at the mouth of the Mauneluk River. My friend and I chewed and listened. Nina mentioned the recent rain, which had interrupted berry picking and caused the ladies to cease seining for whitefish. We all lamented how tall the willows and alders are growing nowadays, so thick in places that we can’t spot animals and can hardly recognize once-familiar spots along the shores of the river.

Mildred is tiny and incredibly stooped. Nina is wiry and agile, constantly moving and working. Their conversation meandered back and forth: to the fact that no caribou had come yet this fall; wolves were plentiful; young people didn’t fish enough anymore — they watch too much TV, and drink, and do drugs, and don’t know how to survive. “They gonna starve when hard times come again. They need to know how to fish.”

I listened to the concerned old women, noting that they used the word “when” and not “if” talking about hungry times coming. I cut at my moose bone, wishing now that I’d chosen one with a little meat on it, not just all fat and cartilage. I enjoy their stories, and gently steered Mildred back upriver, and back in time, asking: “When you were kids, when did you first see a moose?”

She told a tale of no moose in the country — back in the ’40s — and how one day her uncle got a strange dark animal, a moose. One fun part about Mildred’s stories is that nearly everything that took place more than 15 or 20 years ago she refers to as “back in the ‘40s”. Once you accept that as a catch-all phrase, not an actual date, you can’t help smiling each time she says it, and marveling at the cool way that so many seasons have settled in her mind like fallen leaves.

Her statement about moose and their uncle fit with what I was pondering. Basically, had moose been here in the upper Kobuk since time immemorial, or, similar to what took place around Kotzebue, had they arrived relatively recently? To me this suggested that vegetation — willows and other shrubs — had been increasing steadily here, even, ahem, back in the ’40s.

[Remembering Clarence Wood, a hunter in the truest sense of the word]

From there my thoughts scattered, wading through what we’ve been experiencing here in Northwest Alaska: much warmer falls and winters — so warm that we have rain blizzards in winter now — and changes in wind, water and ice and weather patterns; changes especially in the rapid over-growth of vegetation; changes in the movement of animals. Drastic changes in us humans, too — unimaginable changes, if viewed from the recent past Nina and Mildred have lived — and yet us still holding onto uncertain connections to the land, hunting and fishing and gathering.

It was late August, and not surprisingly my mind moved to caribou, arguably still the most important animal here to most local people, regardless of the inroads made by boxes of technology flooding north — the Xboxes and the Amazon boxes, the manufactured homes and steel shipping containers, Pampers and cases of Pepsi, TV and telephones, and all the rest of that store-bought stuff.

For a minute, I chewed and cut at my big moose bone. In my cluttered head I was sifting through buried accounts of buried accounts I’d read of the early 1900s along the Kobuk: the starvation and suffering, the diseases and the dearth of caribou here in the years after the crash of the herds in the late 1800s.

“What about caribou?” I finally asked Nina and Mildred. “When did you first see those?”

I’m shy — worse around elders. Over the years I’ve mostly kept my thousand questions to myself. Like many members of the “younger generations” here, I’m deeply embarrassed by my lack of knowledge, by the huge and obvious gaping holes in what I know about the land and animals, and the place names and proper seasons for gathering this or that — which species of whitefish to preserve in which way, etc. — and all of that is made worse by the fact that I’m white, and exactly why am I asking? What am I planning to do with their traditional knowledge? My eyes stayed down, on my knife, as I carved at another bite of tasty fat. The moose was fresh and good, a young bull. “Were there caribou around when you were kids?” I murmured.

At times Nina can’t hear too well. Mildred is stooped, bent low, but she can hear and think and remember just fine. Instead of answering directly, she did that perfect thing that elders often do — she began a story. In this case the story was about her as a 7-year-old, back in the ’40s, when as girls they first saw a caribou. The men had all gone hunting and left the women to tend camp. A lone animal with strange antlers showed up on the sandbar below their camp.

The women had a .22 rifle and one bullet. An older sister took the gun and the bullet, and she moved quietly downriver through the brush. After a long while the girls and women in camp heard a tiny, distant report from the rifle. They rushed to grab their ulus and knives. They hurried along the shore. As they came out of the willows at the upper end of a sandbar they could see their sister. Lying near her on the sand was an animal they’d never seen before. It was large and very dark, with a rounded white stomach and chest and large black furry antlers. The hooves were black and the legs and flanks thin with short summer hair. The women and girls had never worked on a caribou, but of course they cut it up and hauled the meat back to camp.

Sitting at Nina’s table, I wondered if that animal had been a lone stray, or had that marked the beginning of caribou returning in numbers to this country. I kept my question to myself. In this region, asking too many questions is often considered bothersome, and definitely white. I couldn’t help smiling, though, and slowly, shyly prompting, “Um, ah. What did the men say? When they got home.”

Nina glanced up. The two old ladies grinned and shared a glance over their moose bones. “Lucky!” Mildred said. They laughed happily, and then we all laughed again because of how she dragged the syllables out, and because of the ironic way that solitary word so perfectly summed up the infinite complexities, intense effort and uncertainty involved in finding food on a hungry land.

The telephone rang shrilly. Nina leapt up to answer it. “Mail plane coming!” she shouted. “Ravn 15 minutes out!”

The old days quickly faded from the room. Now, suddenly back in the present, with a plane to catch, I glanced at my backpack and boots by the door. I wiped the fat off my knife onto my finger and licked my finger, sheathed my knife, and quickly checked the time on my iPhone. Still, I could see that bull caribou. Lying dark on the summer sandbar. I could see the knobby knees and black hooves, the soft black velvet antlers, and the animal’s thin summer coat. And on the sand beside the caribou a bright pool of coagulated blood, with flies buzzing, and gnats and mosquitoes frenzied over the smell of so much fresh blood. And soft green summer leaves on the willows, fluttering in a warm breeze, and the quiet current of this old river flowing past. I could see how lucky I’ve been, to have lived so many seasons with caribou flowing through my life.

For just a few more moments, I sat at Nina’s table, comforted to remain lost in the years, to picture the continuous stream of food, the thousands and thousands of meals these two sisters, and myself too, have harvested from this land.

Seth Kantner is the author of the best-selling novel "Ordinary Wolves" and most recently the nonfiction book "Swallowed by the Great Land." He lives in Northwest Alaska and can be reached at sethkantner.com.