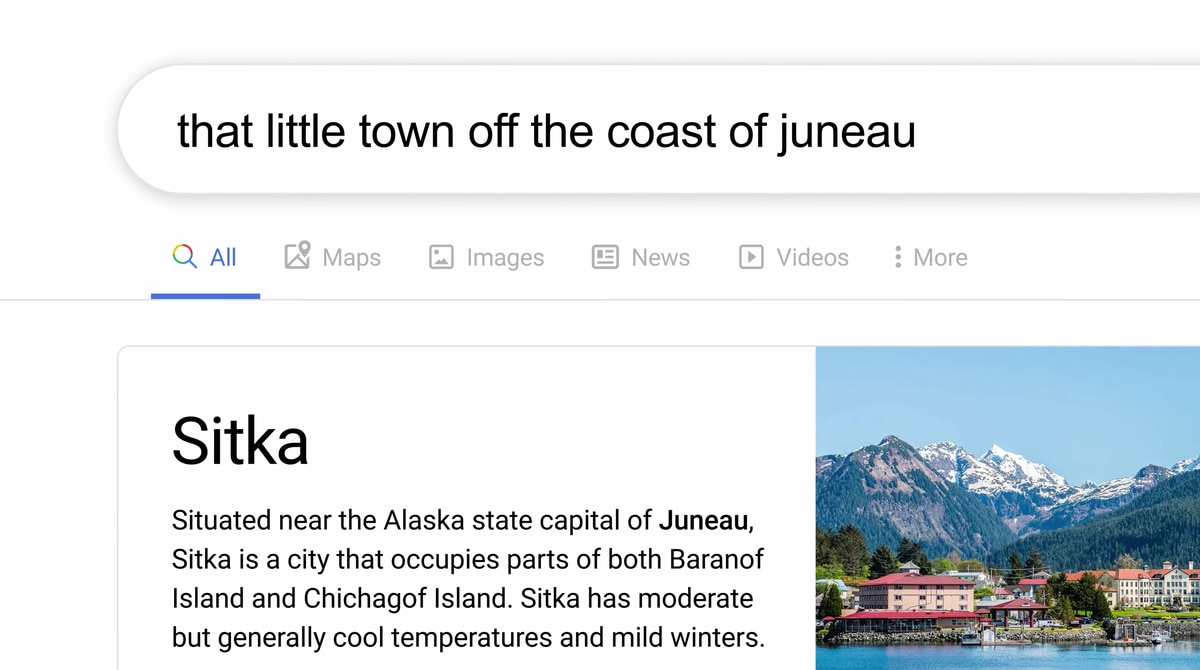 SITKA — Mary Magnuson was bartending at Totem Square’s Mean Queen Sunday when a certain Super Bowl commercial came on and she told her customers, “SSSSHHHHH!”

The ad – which she’d heard about in advance via Facebook – was for Google. It starred an elderly male narrator who used Google Assistant to help him reminisce about his late wife, Loretta. He told Google to show him pictures of Loretta, to remember that Loretta “hated” his mustache (to which Google responded, “OK, I’ll remember that”), and even to remember that Loretta loved going to Alaska. He typed in “that little town off the coast of juneau,” which brought up a picture of the Sitka downtown waterfront and a short description of the town.

“I thought the ad was very touching,” said Magnuson, co-owner of the two Mean Queens, as she was having lunch at the Pioneer Bar with two of her cooks, James Hale and J.R. Reeves.

Magnuson said many of the women she knows teared up when they saw the ad. It touched men as well, including one “very manly fisherman” who “bawled,” she said.

Hale was a little more analytical. The ad was “very interesting,” he said, adding, “But it is not ‘a little town off of Juneau.’ It’s our own town.”

Then Magnuson chimed in: "Well, Juneau is a good reference for people to know where Sitka is, but we're our own place. We're a powerhouse!"

Then Hale said, "It is what it is. Most people don't know anything about Alaska in the first place."

"They think we ride dogsleds to work!" said Reeves.

[The 5 best Super Bowl commercials - and the 5 worst]

The Sitka mention was not coincidental, and may be chalked up to Visit Sitka keeping an eye out for opportunities.

Rachel Roy, executive director of Visit Sitka and the Sitka Chamber of Commerce, said she was contacted about a month ago by a team from a New York Google office with a request to use the photo from the “Visit Sitka Pocket Guide” for an advertisement. The single-page tourism brochure is available online and in printed form, featuring Sitka stores, restaurants and visitor activities.

Roy recounted the request from the Google representative: “Part of it, is we’re showing a user doing a Google search for ‘that little town off the coast of Juneau.’ We’d like to use your photo included in a Visit Sitka page.”

"We didn't know it was for the Super Bowl," Roy said.

In response to the request, Visit Sitka purchased unlimited rights to the photo from former Sitkan Ken Sprague and gave the go-ahead to Google.

Roy was tipped off by Allen Marine spokesman Zak Kirkpatrick around 1 p.m. Sunday that Sitka would be featured in one of the Super Bowl ads. Roy and others who work for the chamber and Visit Sitka were at Centennial Hall Sunday cleaning up from the chamber awards banquet the night before, and were stunned when the messages started coming in.

"It snowballed," she said.

Roy counted more than 40 messages, from across the country, from people who had seen the ads in broadcast of the Super Bowl game, and were excited for Sitka.

Since then the ad has been shown on television numerous times.

"Not only is it getting exposure through social media, it's also getting exposure (because) the news people are playing it across the nation as one of the best commercials in the Super Bowl," Roy said.

She said Visit Sitka's small investment to purchase rights for the photo is paying off in many ways.

"Since then, I also ran into a business owner who said they were getting bookings during the Super Bowl for their business for fishing, for people wanting to book for the summer," Roy said. "We will be able to report on analytics from this week after we are able to look at them. We'll be able to see our Visit Sitka numbers, and how many people are looking at Sitka when the commercial is airing."

Roy noted that a Super Bowl ad for Sitka was on the wish list of participants at a Visit Sitka workshop "if money were no object."

“I don’t think we can put a dollar amount on how much it’s worth,” she added.