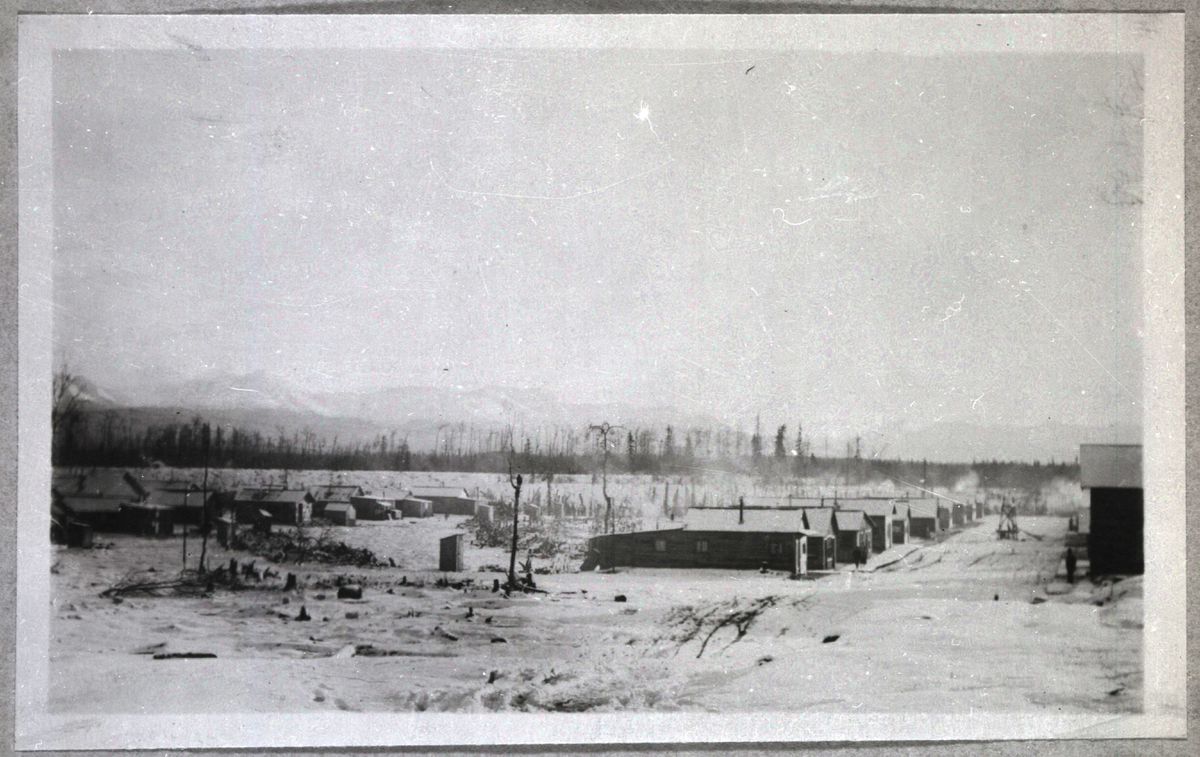 In March 1914, President Woodrow Wilson signed the Alaska Railroad Act, which authorized the construction of an Alaska railway system and created the Alaska Engineering Commission (AEC) to oversee the project. In May 1915, AEC Commissioner Frederick Mears and his staff landed at Ship Creek.

Many Anchoragites know this story, about the tent city that followed Mears’ arrival and the settling of the original Anchorage townsite. Fewer people know about the people already here when Mears arrived.

Mears and company initially and generally ignored the Dena’ina fishing camp at the mouth of Dgheyaytnu (Stickleback Creek), which is today called Ship Creek. That camp existed through the beginning of World War II when the area was claimed by the U.S. Army. Today, a bronze statue of a Dena’ina women installed in late 2018 commemorate’s the camp.

Railroad officials were less able to ignore the prostitutes, central European laborers, and other opportunists already established along Ship Creek. Indeed, prostitutes in Anchorage predate Anchorage itself! Mears saw these women as trespassers and kicked them out of their camps. As long as they stayed off AEC land, Mears did not care what they did or where they went. Anchorage manager Andrew Christensen agreed that they could not be allowed to settle in Anchorage proper, and the prostitutes were forbidden from buying townsite lots.

However, Christensen did authorize the construction of a short road outside the townsite for them to settle along. Built during the summer of 1915, the road began at Ninth Avenue, the southern edge of town, and cut south through what is now Delaney Park into a block between B and C Streets. The road cut through and into, respectively, what is today Delaney Park and the South Addition neighborhood. Within a few weeks, the area was exclusively home to prostitutes whose crib houses lined both sides of the road. South Addition: Anchorage’s original red-light district.

A crib house is an older term for a brothel. A crib was an animal stall, and in many American brothels, a prostitute’s room was barely larger than a stall. The more modern use of “crib," meaning your home, derives from crib house.

A group of itinerant European laborers were also not allowed to buy townsite lots. Locals derisively referred to them as “bohunks,” a pejorative for central and southeastern Europeans often used by Americans to describe any European seen as uncivilized. The word blends together “Bohemian” and “hunk,” short for Hungarian. English-speakers at the time described people from the region of the Czech Republic, which included the former Kingdom of Bohemia, as Bohemians. Despite banning them from the lot auction, the AEC still wanted these men available as labor. So, the workers were initially allowed to settle just east of the prostitutes, between what is now C and Barrow Streets.

Christensen had exceeded his authority. The land occupied by the prostitutes was overseen by the U.S. Forest Service, whose representatives were furious with Christensen for implicitly authorizing the construction of a red-light district outside his domain and in theirs. On July 18, 1916, the women were ordered to vacate the area immediately, and the district was quickly dismantled. Most of the women abandoned Anchorage, many leaving the territory entirely.

The creation and destruction of one red-light district is interesting on its own, but the story isn’t over. Like most frontier settlements, Anchorage at that time was overwhelmingly male. A couple of months after the district was destroyed, which was a couple of months with less opportunity for female companionship, a group of city leaders unofficially invited the women back to Anchorage.

The source for this whole episode is a detailed memo written by a clearly frustrated Charles Flory, an assistant district forester. Flory understandably declined to name names but claimed the invitation for the prostitutes to return “was done by understanding and knowledge of those locally in authority of this complicated administrative region.”

In other words, the women were invited back by some of the city’s political and commercial leaders, some of whom have names that endure in the local history and on our streets and buildings to this day.

The returning prostitutes were allowed and encouraged to settle directly south of the original red-light district, “in a low land near Chester Creek.” Flory’s description suggests the new district was located somewhere in the vicinity of what is now Valley of the Moon Park, perhaps immediately below what decades later became the site of The Spa, which housed the local indoor swimming pool. Once again, city leaders did not notify the relevant officials that they were settling prostitutes on Forest Service land.

The majority of the women operated independently, each living and working in small one-story, two- to three-room homes. There were no and could be no official land sales or leases. The women held a drawing to distribute the lots. By November 1916, the new district was well-established, and its residents were respected by many. Per Flory, the “women are notoriously good buyers and spend their money freely” and sales were “lucrative source of income” for local merchants. Embarrassed by the affair, the Forest Service abandoned their seat on Anchorage’s governing board and advocated for the land to be removed from their oversight.

For obvious reasons, there tends to not be as much documentation for illegal enterprises as there are for legal. It is not clear what exactly happened to the Chester Creek red-light district or its industrious residents. Most likely, they were cleared out a few years later in favor of homesteaders with legal claims to the land.

In addition, many of the downtown businesses, especially the cigar shops and pool halls, evolved into fronts for illegal bootlegging, drugs, gambling and prostitution. Some of Anchorage’s most notorious early residents, including “Russian Jack” Jacob Marunenko and “Phantom Swede” Ed Olson spent time as proprietors of such businesses. By 1920, an area on C Street, between Sixth and Ninth avenues, had evolved into the town’s newest red-light district.

It’s also likely that some if not many of these prostitutes built new lives for themselves in Anchorage. The most famous and successful prostitute in Anchorage history is Zula Swanson (1891-1973), who transitioned from prostitute to madam to significant landowner during her lengthy stay (1929-1973). In her time, she was one of the wealthiest women in town, owning several downtown properties, a stake in the Bank of Alaska and her dream home overlooking Goose Lake.

David Reamer is a historian who writes about Anchorage. His peer-reviewed articles include topics as diverse as baseball, housing discrimination, Alaska Jewish history and the 18th century English gin craze. He’s a graduate of the UAA and nerd for research who loves helping people with history questions. He also posts history pieces on Nextdoor.