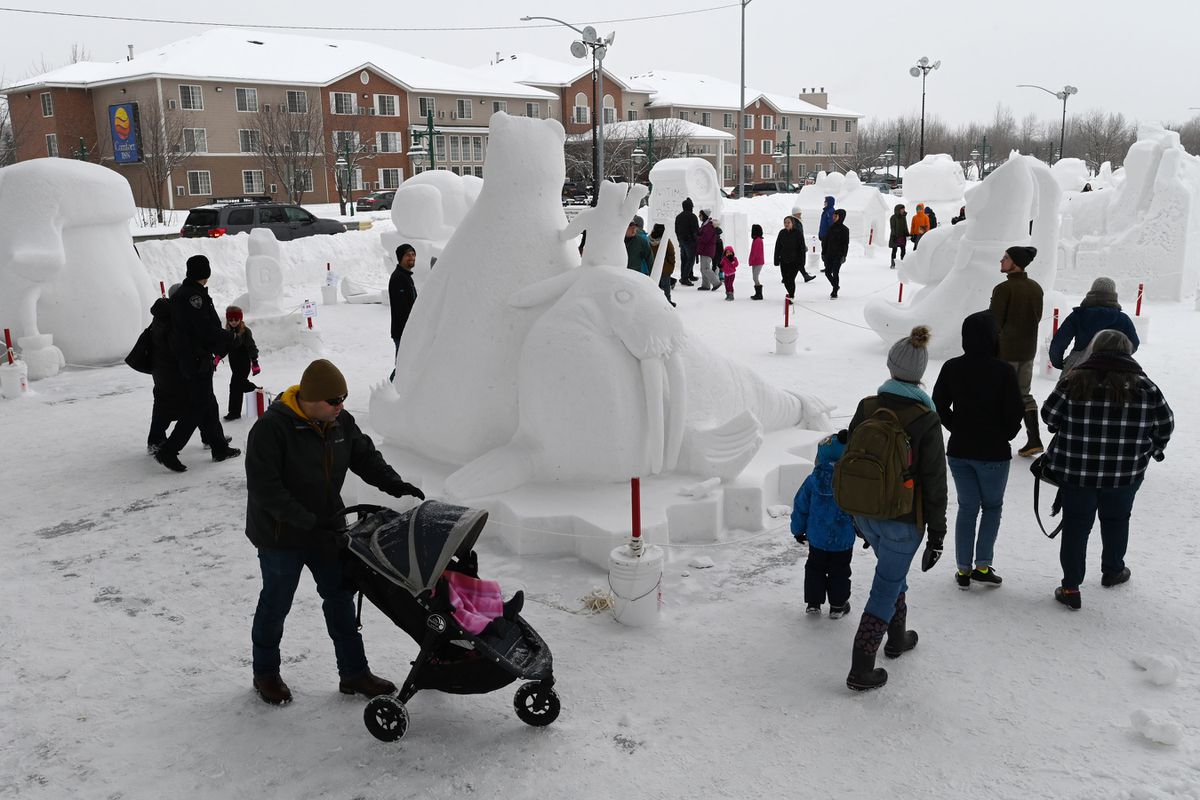 On Sunday, the last day of the Alaska State Snow Sculpture Championship, Fur Rondy festival goers walked the parking lot underneath the Ship Creek bridge through rows of snow sculptures and paused to take photos.

In the mix there was a giant hermit crab, a polar bear taking a selfie next to a narwhal, a mushroom cap, Mr. Potato Head, Snoopy and an octopus emerging from the pages of an open book and gripping its tentacles around a submarine.

The winning team, AK Awesome, carved two spiraling portals; a man emerging from one grasped the foot of another person as they disappeared into the portal. The sculpture, “The Struggle is Surreal," took first place in the three-person division of the competition, and they will fly to Wisconsin to compete in a national snow sculpting competition.

[‘Wanna come play in the snow?’: For some families, Fur Rondy snow sculptures are a winter tradition]

Ken Coffey flew about 7,000 miles to spend last week carving a giant frog and Baby Yoda into a chunk of snow with his two sons and grandchildren during the annual Fur Rendezvous competition.

It’s the second year he’s made the trek. He says it won’t be the last.

“I think it’s going to be an annual event for the Frozen Kiwis,” he said, referring to their team name.

The five-person team chipped away at the 8-foot-tall block throughout the week, but son Bryan Coffey said they worked through the night Saturday to finish by Sunday’s 10 a.m. deadline. His brother Ben Coffey flew in from Juneau both weekends to help out with the sculpture.

“It was good until like 5:30 in the morning and then I think people got grumpy,” Bryan said.

Throughout the night, Bryan said, things got loopy as tired teams chipped away and smoothed the sculptures. People jammed out on air guitar shovels; one team started a cookout and everyone gathered around the grill for a short intermission from the frigid night.

By 6:30 a.m., it was shovels down for team Frozen Kiwi. Their giant frog and Baby Yoda sculpture was complete.

Bryan joked that the best part of the week was the well-earned nap that followed.

When judges walked around and examined the sculptures Sunday morning, they awarded the Frozen Kiwis third place in the family competition.

On Sunday night, Ben was scheduled to head back to Juneau and Ken would leave on Monday.

“I’ve been looking forward to this for awhile now and it’s a good excuse to get out with everyone,” Ben said.