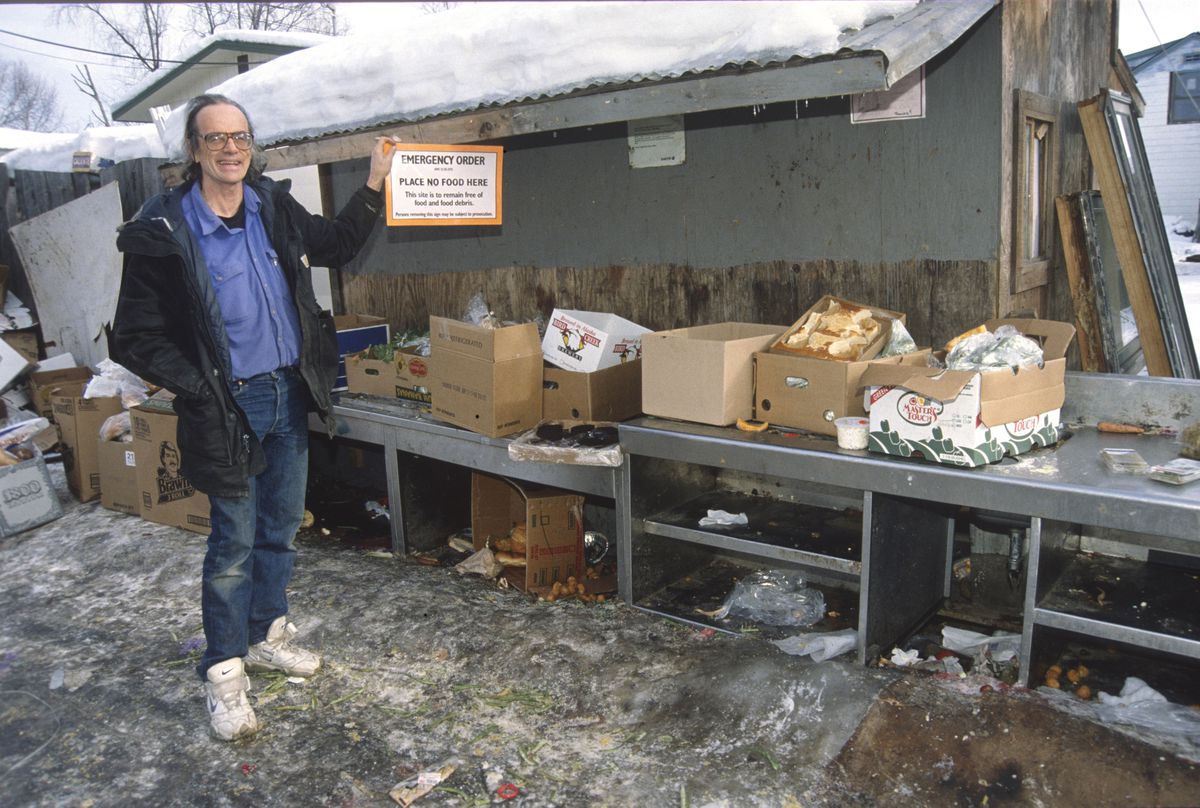 Michael O'Callaghan shows one of the five signs he's torn down from the Earth food give-away tables in the alley in back of his home near Medfra and East 15th Avenue, March 11, 1998. The city health department put the signs up. (Jim Lavrakas / ADN)

Michael O'Callaghan shows one of the five signs he's torn down from the Earth food give-away tables in the alley in back of his home near Medfra and East 15th Avenue, March 11, 1998. The city health department put the signs up. (Jim Lavrakas / ADN)

For several decades, Michael O’Callaghan was one of Anchorage’s most colorful activists and political gadflies. His causes were myriad and wide ranging. With him now in Portland, is there anyone left in Anchorage that combines his mixture of humanism, flair for the dramatic and quixotic inclinations? Feel free to suggest candidates!

O’Callaghan first came to local prominence with the grassroots environmental action group Earth in the late 1970s. Most notably, he oversaw Earth’s Earth Cycle program, a bicycle lending initiative founded in 1979 and initially subsidized by the Municipality of Anchorage.

When described simply, his causes are always noble, whether peace on earth, feeding the hungry, housing the homeless, protecting wildlife, addressing pollution or something as prosaic and useful as bicycle access. What made him a memorable character was how he went about advocating for those causes. To this day, he continues to display a penchant for the outrageous, a tenacious willingness to brain himself against the walls of bureaucracy and a gift for the colorful quote. The latter trait made him a media darling, in as much as he consistently provided good copy.

For example, consider moose struck by trains. Hopefully, no one is in favor of trains slaughtering moose, but a practical workaround for surprisingly common moose-strikes wasn’t apparent. But O’Callaghan saw the problem differently. O’Callaghan had an idea. In 1988, after years of petitioning the Alaska Railroad to address train versus wildlife fatalities, he proposed a padded, expanded frame on train engines that would push aside any wildlife obstacles.

O’Callaghan stood out with his willingness to publicly test the concept. The experiment to end moose-strikes was conducted in an empty parking lot before a group of friends, family and other interested onlookers. Included in the crowd were far less supportive, albeit openly amused media and railroad officials.

O’Callaghan mounted 5-inch-thick padding on a snowplow and rammed two moose substitutes: a 6-foot-long boiler and a 53-gallon barrel, both filled with water and placed atop plastic milk cartons. The truck struck the boiler at around 50 miles per hour, knocking it 50 yards away. Asked about the 5-inch-deep dent in the boiler moose, he declared that was the ground’s fault, not the obviously safe padding on the truck. So, no, this experiment was not a paragon of the scientific method.

This was his way, his style of going about things. Some ideas were more practical than others, but they always tended to digress wildly from the status quo. When concerns over air quality were raised in the late 1970s and early 1980s, he suggested a toll to enter Anchorage. “Why don’t you put a booth out at the Knik River and charge $1 to come to the Anchorage zoo,” said O’Callaghan to the Times in 1979. “It’s a buck to get in. Free to get out.”

He proudly dumpster dived, a lifestyle he encouraged for others. In 1987, he told the Daily News, “Oh, I’ve gotten amazing scores out of the dump boxes . . . Once I got like maybe a 15-pound prime rib . . . It’s really a whole lot like Christmas. You never know what you’re going to find.”

O’Callaghan eventually expanded his dumpster diving into a citywide food network. Donning a suit for once, he convinced management of the Carrs grocery store chain to donate expired, dented, bruised and otherwise damaged groceries — food that had previously discarded. In 1986, that program distributed around 450,000 pounds of food. “If we can help one hungry, needy person a month, a year or whatever, the purpose of the program has been filled," said O’Callaghan. Newsweek magazine declared him one of America’s unsung heroes.

Michael O’Callaghan stories are endless. There was the 48-day hunger strike to protest state policies on roe-stripping and fish dumping that ended due to his inability to withstand the allure of macadamia nuts. There was the time he wore an aluminum foil mask to a protest against the naming of a new ballistic submarine after Alaska.

In 1990, he successfully sued for admission into that year’s gubernatorial campaign. During public events and voter drives, there was Michael present and answering questions, the often-unemployed scavenger against some of Alaska’s most skillful politicians — Tony Knowles, Arliss Sturgulewski and the eventual winner, Wally Hickel. Yes, he lost, but as O’Callaghan declared to the Daily News in 1998, “When you really lose is when you take it seriously because then the joke is on you.”

Many residents fondly remember the annual fish giveaway during the 1990s organized by O’Callaghan. In all, hundreds of thousands of pounds of salmon and pollock surplussed from hatcheries, fish that would otherwise have been dumped as waste, fed thousands of locals in need. In the late 1990s, he and his then-wife Lydia ran an unofficial foodbank from the alley behind their Fairview home until shut down by a court order following years of battles with city officials.

Michael O’Callaghan was an enduring symbol of a different Anchorage, of a time when places like the Wherehouse and Bread Factory were institutions of a certain hippie attitude that managed to thrive within a town mad for oil money. And like those sanctuaries for free spirits, he’s long gone.

For years now, he’s lived on the streets of Portland. However, neither that lack of permanency nor his advancing age stops him from fighting battles wherever he happens upon them. He’s walked through doors in city halls most often kept closed to the likes of him. He’s sued the city of Portland for homeless camp sweeps. And most recently, he filed for the 2020 Portland mayoral election, the city’s homeless candidate.

If you have any Michael O’Callaghan stories, please share in the comments!