In 1918, Anchorage went into quarantine. Some of what followed might sound familiar. 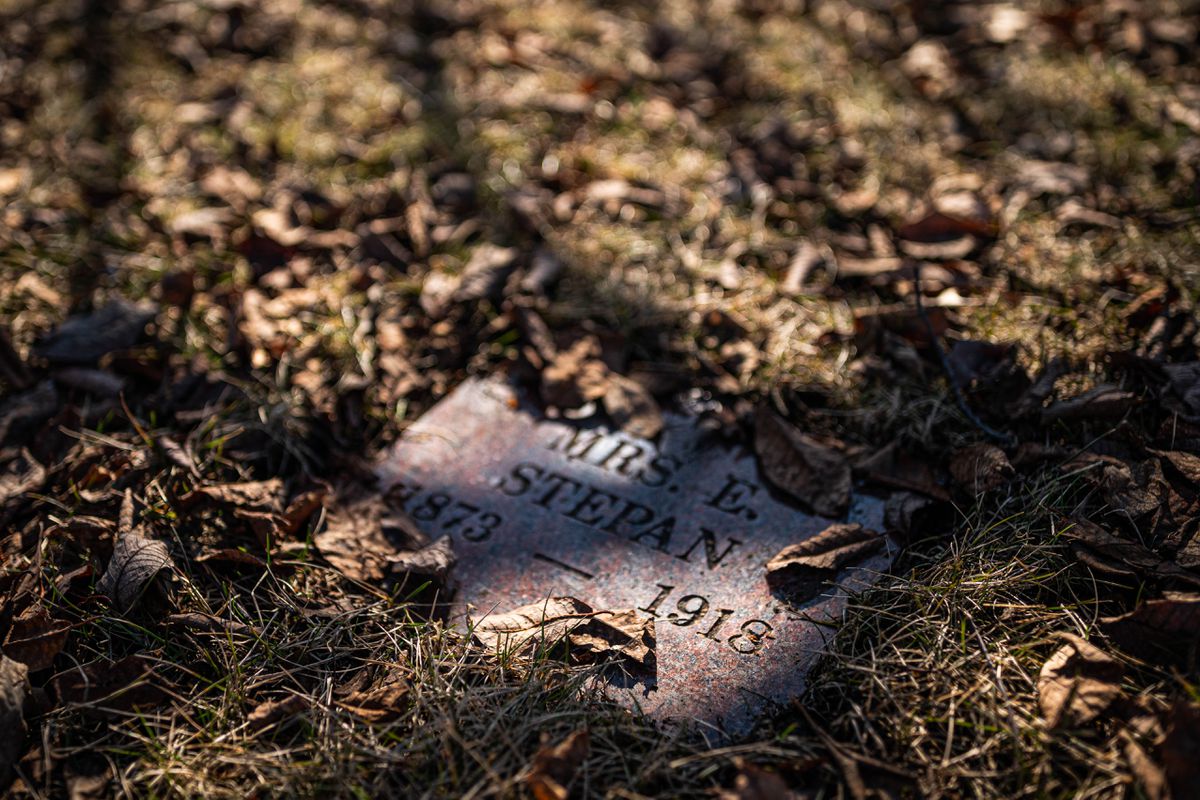 A gravesite for Mrs. E. Stepan, an Anchorage resident who died from the 1918 Spanish Flu. Photographed at the Anchorage Memorial Park Cemetery on Saturday, April 25, 2020. (Loren Holmes / ADN)

A gravesite for Mrs. E. Stepan, an Anchorage resident who died from the 1918 Spanish Flu. Photographed at the Anchorage Memorial Park Cemetery on Saturday, April 25, 2020. (Loren Holmes / ADN)

Editor’s note: This column is a followup to last week’s history column by David Reamer, “In 1918, a deadly outbreak of influenza reached Anchorage. Here’s how Alaskans responded”

On Nov. 29, 1918, a Friday, Anchorage resident Mary Gold died of pneumonia, another victim of the Spanish influenza. Her death shocked locals. Ben Gold, her husband, was the prominent proprietor of a Fourth Avenue dry goods store. And Mary was one of the more visible volunteers at the hospital. Just that previous Sunday, she “was well and doing all she could to help those afflicted with the influenza,” according to the Anchorage Daily Times. She took ill that night, was admitted to the hospital the next day and then rapidly deteriorated, “despite all that could be done for her by human effort.” The next April, Ben sold the business and abandoned Anchorage for good with their two daughters.

The Spanish influenza, or Spanish flu, pandemic of 1918 to 1919 was confirmed in Alaska by October 1918, later than most of the Lower 48. Mortality rates in Alaska varied wildly from town to town, or village to village, let alone region to region. In some areas of Alaska, such as a large swath of the Seward Peninsula, mortality rates were as high as 90-100 percent. Estimates for Spanish flu deaths in Alaska range from 1,100 to 2,000, though such estimates are quite likely conservative due to poor documentation.

November 1918 was the peak for the Spanish flu in Alaska, a dark conclusion to what was an especially tragic year for the territory. Besides the pandemic, as difficult as that might be to consider, World War I did not conclude until Nov. 11. Alaskans died in this war, including Anchorage’s John “Jack” Henry, the namesake for the first local American Legion post. And on Oct. 25, the passenger liner SS Princess Sophia sank near Juneau. All aboard died, more than 300 crew and passengers, the deadliest maritime accident in Alaska history.

In Anchorage, there were many short- and long-term impacts from the pandemic. One was the delay in burials. First, there could be no public funerals due to the local quarantine enforced through most of November 1918. Second, one of the local undertakers, Helmer Wickberg, himself succumbed to the Spanish flu. Ed Walker, perhaps the first local death, died on Nov. 3 but was not buried until Nov. 17.

Similarly, the Anchorage quarantine order also closed all church services. Not all residents agreed with this action. The Anchorage Christian Science Society paid the Times to reprint a lengthy editorial from the Christian Science Monitor. Said the author, “The church which closes its doors practically proclaims its impotency, and the admission is a terrible one when it is made in the hour of a nation’s need.” A service in memory of all local pandemic victims was held in the Presbyterian church on Dec. 15, 1918.

The quarantine also impacted the November 1918 election. Political rallies and meetings were banned with all other public gatherings. As could be expected, turnout was low, with an estimated "100 qualified voters" kept from the polls just in Anchorage.

Throughout Alaska, police and marshals patrolled city streets, dispersing gatherings. James Wickersham, the once and future Alaska delegate to Congress, was present at one such illegal meeting in Juneau. However, he was relieved after it was shut down. That evening, he learned that the virus had claimed a friend in Ketchikan. Wickersham's diary entry for the day concludes, "I am afraid from influenza!"

Nationwide and long-term, the Spanish flu also increased professional credibility and recognition for nurses. Without a vaccine or antibiotics, the doctors mattered relatively little to case outcomes. The nurses treated the symptoms and eased the experience for patients.

In Anchorage, doctors downplayed the significance of the Spanish flu into the crisis itself. "Don't be alarmed over influenza in Anchorage," said local doctors. "There is none and what seems so is just ordinary, common every-day grippe." Nurses were, according to the Times, the "people who quietly and unostentatiously served as good Samaritans during the influenza epidemic who are entirely satisfied in knowing that they did all in their power to relieve the afflicted."

Thus, Mary Gold's passing was a small tragedy amidst a larger one, for she was one of the few willing and able to assist the sick. Other nurses and volunteers in Anchorage became ill due to their exposure, though Mary is the only one known to have died.

The Spanish flu pandemic did provide something of a base for a better Alaska, or at least an Alaska better prepared for the next public health calamity. In 1919, the first Commissioner of Health was appointed, albeit on a part-time basis and without a salary until 1923. Many communities established boards of health at this time. Some of the resulting restrictions appear familiar, like a Ketchikan regulation that required an empty stool between restaurant patrons. In Fairbanks, postal workers fumigated mail.

In Anchorage, the creation of a local health board in late October 1918 empowered officials to enforce the subsequent “flu siege.” And it set the stage to respond to later crises. Acting not as mayor but as chairman of the Anchorage Board of Health, Oscar Gill decisively instituted a strict quarantine on Jan. 13, 1936, that curtailed the deaths of Anchorage children during a scarlet fever outbreak. Restrictions on public gatherings would also be implemented in the local diphtheria and polio outbreaks of 1946 and 1954 respectively.