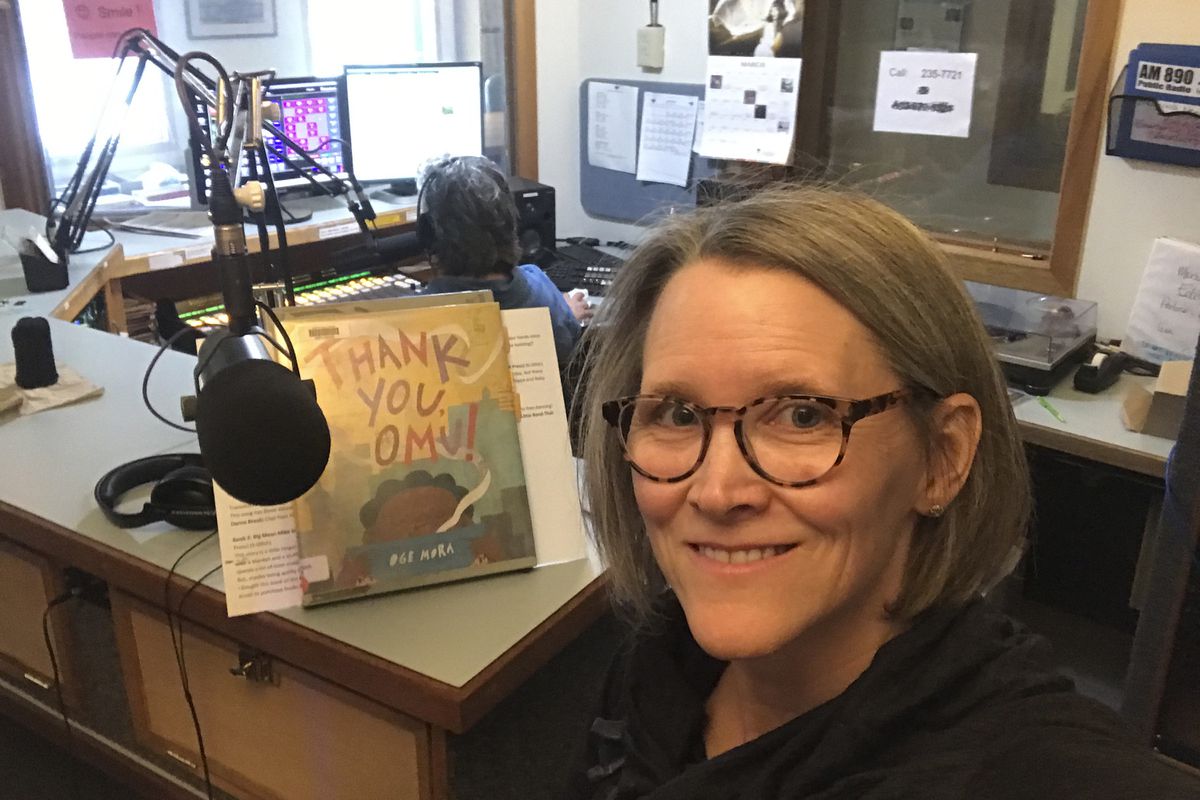 In this April 2, 2020, photo provided by librarian Claudia Haines, she poses for the selfie while preparing to read stories on the air at local radio station KBBI in Homer, Alaska. The library teamed up with the station to continue its popular story hour for preschoolers after it closed to the public amid coronavirus concerns. It's among ways the nation's libraries are dealing with closures amid coronavirus concerns. (Claudia Haines via AP)

In this April 2, 2020, photo provided by librarian Claudia Haines, she poses for the selfie while preparing to read stories on the air at local radio station KBBI in Homer, Alaska. The library teamed up with the station to continue its popular story hour for preschoolers after it closed to the public amid coronavirus concerns. It's among ways the nation's libraries are dealing with closures amid coronavirus concerns. (Claudia Haines via AP)

All it takes is a few words from a storybook to connect kids over the crackle of an AM radio station. It’s not 1950s entertainment, but a nostalgic way children in Alaska communities - many with unreliable internet - can overcome further isolation brought on by the coronavirus.

The public library in the Kenai Peninsula town of Homer got creative when it had to close during the pandemic, partnering with a radio station to bring a popular story hour to preschoolers stuck at home.

Youth services librarian Claudia Haines reads some children’s books -- chosen to appeal to older kids or adults listening in, too -- Thursday mornings on KBBI, which serves the town of 5,000 and surrounding villages. The AM station is among several radio broadcasters that have served far-flung Alaska communities for decades, chronicling their histories and cultures and even sending personal messages on the air for people far from the limited road system in the vast state.

"Radio has such a storytelling tradition," Haines said. "It's nice to see it put to use."

The program is among ways libraries nationwide are adapting during the pandemic, according to a recent survey by the Public Library Association. Of the more than 2,500 libraries that responded, over 90% said their buildings have closed. Like the Homer library, they have expanded online services like streaming media and e-books.

They're also contributing to their communities. The El Dorado County Library in California is getting help using its 3-D printers to make face shields for hospitals and other facilities. The St. Louis County Library in Missouri partnered with a diaper bank to provide a drive-through emergency diaper service at four branches.

In Alaska, the radio story hour, which is also live-streamed on KBBI’s website, has dance breaks to let young listeners burn off some energy. The program ends with time for kids to call in.

"They were really happy to call and say hello and have me recognize them," Haines said. "The spirit of the first program was, 'Hey, we've been apart while the library is closed and we're all staying home, but we're still here together in our community, and this is a way to stay connected.'"

Four-year-old Polly Fraley, a regular at the library's story time, said her favorite part of a recent show was "when everybody ate dinner" in the book "Thank you, Omu!" by Oge Mora.

Her mother, Cassy Quinlan, said her family has listened to the radio station for a long time, even communicating with friends who have spotty internet through KBBI's "bush lines" service, which allows locals to have messages read over the air. They can include anything from birthday greetings to love poems, Quinlan said.

Polly and her 6-year-old sister, Lucy, have been missing the library since it closed in mid-March. But the pandemic “is bringing people back to simplicity, you know, the basics -- radio, reading, doing a puzzle,” Quinlan said.

Haines, the librarian, said she jumped at the chance to connect again with families. Hosting the show is one of the few times she leaves the house, working with a single radio staffer to get it on the air.

“Radio, particularly in a small community like that ... can really focus in on children and do excellent work,” retired broadcaster Al Bramstedt Jr. said.