A party with precautions: Friends sing on the sidewalk for Anchorage woman’s 98th birthday 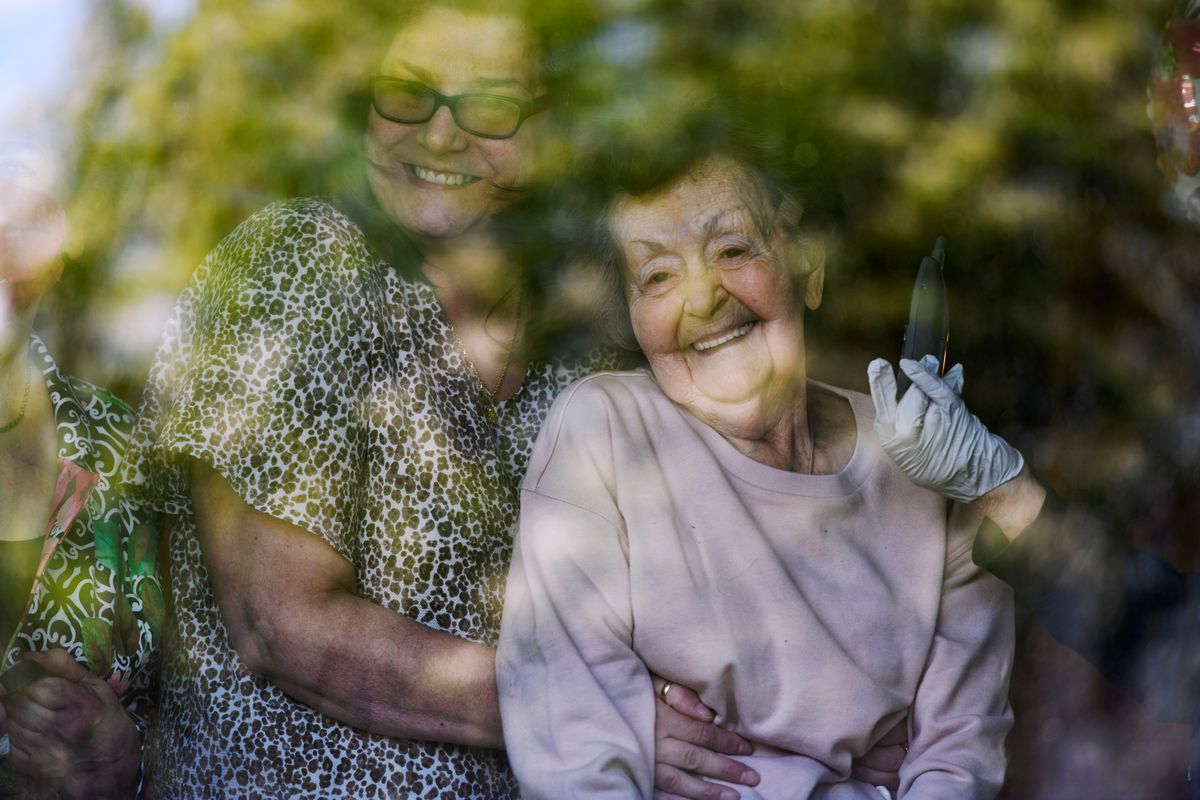 Marge Tomsic, right, watches as friends sing outside her home on June 12, 2020. Caregiver Sarah Powell is at left. The gathering was to celebrate Tomsic's 98th birthday from a coronavirus-safe distance. (Marc Lester / ADN)

Marge Tomsic, right, watches as friends sing outside her home on June 12, 2020. Caregiver Sarah Powell is at left. The gathering was to celebrate Tomsic's 98th birthday from a coronavirus-safe distance. (Marc Lester / ADN)

Marge Tomsic celebrated her 98th birthday Friday at her downtown Anchorage home as friends and family gathered outside to sing and wave. The celebration, organized by two of Tomsic’s daughters, was intended to celebrate from a safe distance with precautions against COVID-19.

“She’s been shut in for several months, and she’s 98. We just thought she needed something special to mark the day,” said Donna Ross, Tomsic’s daughter. “This is about the best we can do.”

“Normally her favorite thing to do is to go to Jens’ (Restaurant) for lunch, but we just can’t do that,” she said.

Scott Taylor, who does handyman work for Tomsic, led a six-ukulele ensemble from the Alaska Jumping Flea Society for three tunes as Tomsic watched from inside and listened by phone. Taylor said he enjoyed seeing Tomsic smile as they sang “Happy Birthday.”

“We don’t do it to make a scene. We do it because we want to bring joy in her life,” Taylor said.

Ross said Tomsic and her father, John Tomsic, moved to Alaska as a couple in their 20s with a 6-month-old baby in 1946, looking for a new start. The couple would eventually have three daughters. Marge worked in a bakery, a dress shop and in fine jewelry sales at various points, according to Ross.

John and Marge Tomsic had been married 62 years when John died in 2004, according to his obituary. Marge has lived in the same home near Denali Elementary School for more than 70 years, Ross said.

Friends describe Tomsic as fashion-conscious with an independent streak. Taylor said she has a fondness for leopard print clothing and pink tennis shoes.

Several trucks from Anchorage Fire Department’s Station 1 passed Tomsic’s home as part of the festivities. A firefighter in a dog costume left balloons at her front door.

“I think she was really overwhelmed,” Ross said.

Anchorage car club revs up graduation celebrations, one rolling parade at a time

Visiting Dad, through the window, at an Anchorage nursing home on lockdown

Abruptly out of work, two Anchorage women climbed into costumes and started a new job: Cheering up the city