This baseball season might be canceled, but Alaska’s history with the game goes way back 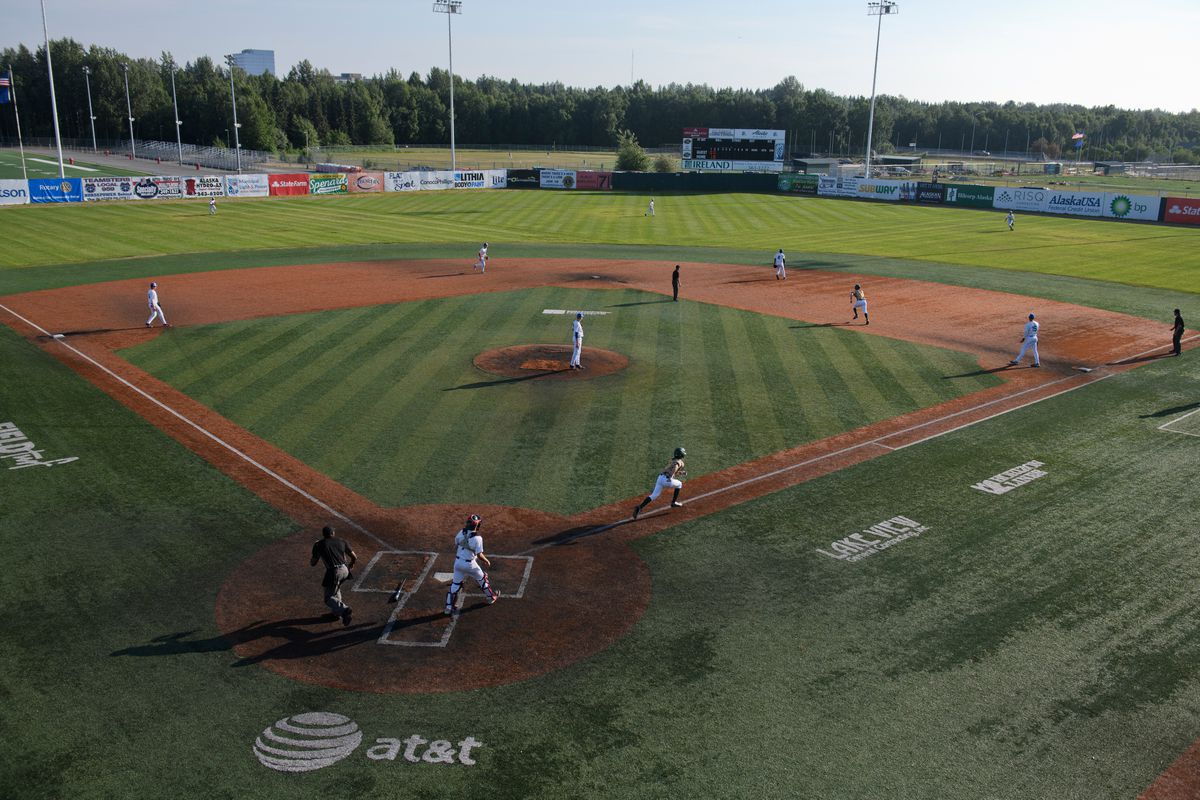 Baseball has a lengthy history in Alaska, dating back to the whalers who carried equipment on board for impromptu shore games, which raises unanswerable questions about losing balls in the snow. While the Alaska Baseball League season is canceled for this year, Major League Baseball recently announced their return, which prompts a review of baseball in Alaska.

In Anchorage, baseball predates the construction of the city itself. As the town’s earliest settlers coalesced into a tent city along Ship Creek, they found time to carve a baseball diamond out of the forest. On July 4, 1915, six days before the auctioning of city lots, residents celebrated the holiday with a baseball game around what is now the Anchorage Museum.

[Related: Despite short season, Alaska’s boys of summer relish the chance to take the field]

The locals wore uniforms, likely reworked Alaska Railroad gear, adorned with a familiar-looking anchor symbol on their chests. Notably, this first official -- of sorts -- Anchorage team was integrated, a few decades before Jackie Robinson made his heavy mark on history. Visible in photographs of that Fourth of July game is a black player simply listed as Agee, who disappears from the local records by the next year.

In 1916, the first ballpark that was more than a cleared field rose at Sixth Avenue and C Street. In 1949, that field was rebuilt, expanded and formally named. To that point, the ballpark was most often simply called the ballpark, the Anchorage ballpark, or, if the resident was being especially inventive for the times, the city ballpark. The renewed ballpark was renamed for William Mulcahy, the father of Anchorage baseball. A railroad employee, he organized adult leagues, co-founded the city’s first Little League, and raised funding for the downtown ballpark. Thus, the current Mulcahy Stadium is the second field in city history with that name.

In the early days of Anchorage, a baseball game, especially a game against a heated rival, was a shut-the-town-down event. Seward was the big rival for many years, a town peopled by many who resented Anchorage’s growth in importance. So, for an annual match between the city teams, thousands from across the territory made the trek in.

In 1934, Anchorage’s starting shortstop walked 28 miles to make the annual game. That same year, a special train trip was scheduled, and hundreds from Seward rode it into Anchorage. If contemporary accounts are to be believed, around 500 Sewardites rode into Anchorage for a ballgame. Per the 1930 U.S. Census, there were were only 835 people in Seward, or just over 1,200 in the Seward area.

Construction on the second and current Mulcahy Stadium finished in early 1962. For some reason, the stadium origin is frequently misdated. The field was seeded that summer but required a year before being played on, so the stadium did not open or host any games until 1963. The infield was converted to artificial turf in 2009.

The greatest moment in Alaska baseball history is easily Satchel Paige’s 1965 appearance in Anchorage. A national legend in his own time, Paige was a pitching star of the pre-integration “Negro leagues” and a two-time MLB All-Star, despite not debuting in the majors until he was 41. By the mid-1960s, Paige had spent a decade as a traveling attraction for a series of minor league and exhibition teams, a guaranteed sensation and draw for whichever team was willing to hire him. Come 1965, it was Anchorage’s turn. At the Anchorage airport, Paige ran into future President Richard Nixon, who joked, “I always enjoy meeting celebrities.”

That August, Paige appeared in four games at Mulcahy Stadium against local military and all-star teams. In his first appearance, the 58-year old needed only 22 pitches for three shutout innings. His mixture of arm angles and trademark hesitation pitch baffled batters. During the rest of the games, Paige glad-handed around the stadium, signing autographs. He stunned locals with the announcement that he would play for and manage an amateur Anchorage team in 1966. The Earthquakers, a topical choice, were to represent Anchorage across the country. However, Paige never returned to Alaska, and the Earthquakers never played a single game. Instead, he surprisingly made one more major league appearance a few weeks after his time in Anchorage, tossing three scoreless innings for the Kansas City Athletics on September 25, 1965. He was elected to the MLB Hall of Fame in 1971.

Twelve players in Major League Baseball history were born in Alaska, beginning with the mysterious Tom Sullivan. Not much is known about him. He was born in 1906 in Nome and had a single at-bat with the 1925 Cincinnati Reds. In 1906, Nome was in the middle of its gold rush, and Sullivan was surely born to one of the many fortune seekers. It is doubtful he and his family stayed in Alaska. Otherwise, how would an 18-year-old come to the attention of team management in Cincinnati?

Of those 12 players, only one graduated high school in Alaska. Chad Bentz, Juneau-Douglas High School Class of 1999, pitched in 40 games for the Montreal Expos, now Washington Nationals, from 2004 to 2005. Of the remaining 11, Curt Schilling is more typical. The self proclaimed “Army brat” and six-time MLB All-Star was born in 1966 Anchorage but raised Outside.

Marshall Boze is a more Alaskan story. Born in Arizona, he grew up on the Kenai Peninsula and pitched for Soldotna High. In one of the most legendary baseball games in Alaska history, he struck out 21 batters in the American Legion and still lost. In the majors, only three pitchers have struck out 20 in a game: Roger Clemens (twice), Kerry Wood, and Max Scherzer. Boze’s pitches were fast but erratic. Said his coach, “He was like that guy in Bull Durham — boom, boom, boom, he’d strike out three batters and the next time he’d kill the mascot.” Five opponents reached base after striking out on pitches so electric that the catcher couldn’t handle them. Drafted in 1990, he appeared in 25 games for the Milwaukee Brewers in 1996, becoming the first player who grew up in Alaska to make the major leagues.

When drafted, Boze accepted the $25,000 bonus and turned down a chance to pitch for the essentially hometown Peninsula Oilers of the Alaska Baseball League. Dozens of future stars played in the ABL before launching their professional careers, including Dave Winfield, Tom Seaver, Mark McGwire, Randy Johnson, and Aaron Judge. But Boze finally had his chance and pitched for the Oilers after his professional baseball career ended.

The greatest Anchorage baseball prospect ever is likely Bill Tompkins, a local high school baseball and basketball star of the late 1940s. He was Alaska Native; his Tlingit name was Hin’Sheesh. In 1950, Anchorage fans donated money to send him to Atlanta for a tryout with the minor league Crackers team. A dispute over his eligibility doomed his attempt, though he did play that year for two North Carolina teams. Tompkins thus became the first Alaska Native to play in a MLB-affiliated minor league. Through the 1950s, he also played for minor league teams in Washington state, Louisiana, and Calgary, Alberta. Tompkins returned to Alaska and remained an active basketball and softball player and coach until his 2001 passing in Juneau.