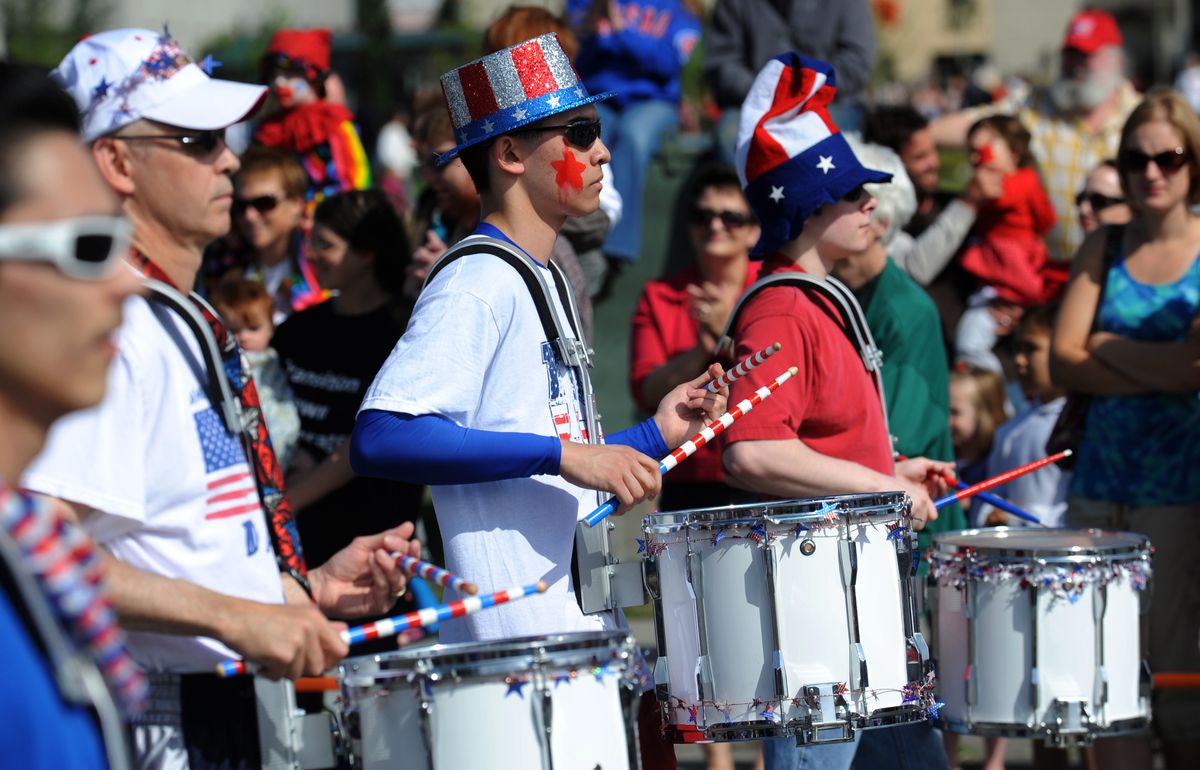 The Red, White and Blue Crew Marching Band performs in the parade at the Anchorage July 4th Celebration in 2011 on the Delaney Park Strip. (Erik Hill / ADN archive)

The Red, White and Blue Crew Marching Band performs in the parade at the Anchorage July 4th Celebration in 2011 on the Delaney Park Strip. (Erik Hill / ADN archive)

Anchorage’s downtown Fourth of July Parade and Festival typically draws large crowds, with over 20,000 people attending last year’s celebration, according to organizers. But the concern over the COVID-19 pandemic has canceled that event, along with almost all other official Independence Day celebrations in Alaska.

Anchorage Fairs and Festivals, the nonprofit that organizes the July 4 festival, decided to cancel in April. Board Chair Nicki Hale said that in the wake of the pandemic, the group thought it was best not to have an event of that size.

“Even though we’re outdoors, we went over it with the municipality ... and everyone concerned just decided not to do it this year,” she said.

The traditional Alaska Baseball League doubleheader game between the Anchorage Glacier Pilots and Bucs is also canceled, and there won’t be an official fireworks show in Anchorage for a second year (last year’s display was canceled due to wildfire danger).

Another obstacle for the celebration is funding, Hale said. It costs over $15,000 to put on the Anchorage event, and since it is free to the public, Anchorage Fairs and Festivals relies on sponsorships. With the economic uncertainty created by COVID-19, Hale said it was impossible to fundraise.

“In April, we had literally been turned down by so many,” she said. “That was also part of making it an easy decision to cancel.”

As for other Anchorage festivities, the city did not receive any permit applications for events, a spokesperson from the Anchorage mayor’s office wrote in an email.

Hallmark events like the Mount Marathon race in Seward and the Girdwood Forest Fair are canceled, though the Girdwood festival will host a Facebook Live event featuring performances by local Alaska musicians.

In light of a recent surge in local cases, the Seward Chamber of Commerce decided Monday to cancel that city’s fireworks show and celebration. Homer has canceled its annual July Fourth parade and picnic, and Kenai canceled its parade as well.

Soldotna is not holding a July 4 event, though the city plans to hold its annual Progress Days later in the month on July 22. The schedule has not been finalized, Soldotna Chamber of Commerce executive director Shanon Davis wrote in an email.

On Tuesday, Juneau also canceled its fireworks display, after the city’s Assembly voted against the ordinance that would have authorized the show.

North of Anchorage, Chugiak canceled its annual parade and Eagle River is not hosting its 3rd of July Extravaganza. Pioneer Park in Fairbanks had a virtual Memorial Day celebration, but is not hosting any events in person or virtually for the Fourth of July, park manager Donnie Hayes wrote in an email. Talkeetna also is not hosting any Independence Day events.

An exception to the wave of cancellations is in Mat-Su.

For those planning on attending in-person events, the Centers for Disease Control and Prevention recommends wearing face coverings and maintaining 6 feet of distance from others to reduce the risk of contracting or transmitting COVID-19. It also advices regular hand washing for at least 20 seconds or using hand sanitizer that has at least 60% alcohol.

Here are the virtual and in-person celebrations residents currently scheduled over the Fourth of July weekend.

(Note: As the COVID-19 situation continues to evolve and change, be sure to check ahead and confirm events you want to attend and get more information about health and safety protocols.)

Girdwood Forest Fair All Access Music Pass — The Facebook Live event will feature performances by Alaska musicians. From noon to 6 p.m. Friday through Sunday, listen to the sounds of the Forest Fair from wherever you are celebrating. Get your free pass at myalaskatix.com for access to the Facebook event and to shop from online vendors.

Glacier View Fourth of July — Bring a chair and watch a Lexus, a Volkswagen Passat and more get launched off a 300-foot cliff at the Glacier View car launch. Gates open at 10 a.m. with food vendors and zipline rides available. The national anthem will be performed at 1:30 p.m., and the car launch will start at 2 p.m. Tickets can be purchased at the door for $20 for attendees 13 and older and $10 for children ages 2 to 12. Discounted rates are available for Glacier View residents. 10 a.m.-5 p.m. Saturday, Glacier View River Retreat, 35068 W. Glenn Highway, Glacier View.