Despite an often tragic reputation, Alaskans have a longstanding love for hardy, vibrant fireweed 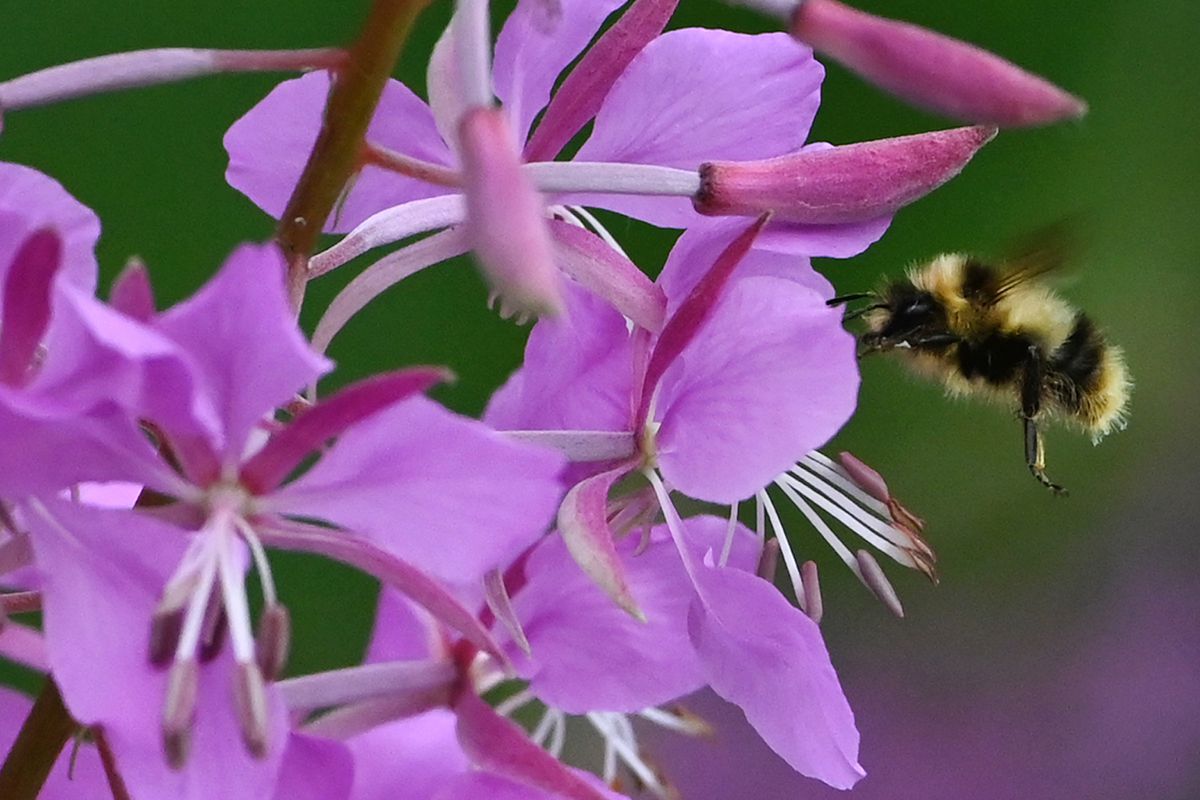 A bumble bee hones in on a flower in a large patch of fireweed blooming in downtown Anchorage on Sunday, July 12, 2020. (Bill Roth / ADN)

A bumble bee hones in on a flower in a large patch of fireweed blooming in downtown Anchorage on Sunday, July 12, 2020. (Bill Roth / ADN)

As the willow ptarmigan is Alaska’s state bird and not the mosquito, so is the forget-me-not the state flower and not the far more ubiquitous fireweed.

The fireweed we know in Alaska — Chamerion angustifolium — proliferates during summer, aggressively erupting in open spaces before cottoning in the turn toward fall. While summer visitors will almost surely see fireweed, they will likely not come across any wild forget-me-not. As such, they’re often surprised to learn fireweed is not the state flower of Alaska.

[Related: Why I kill forget-me-nots whenever I can — and you should too]

The forget-me-not has been the official flower of Alaska since April 28, 1917, decades before Alaska became a state. The Grand Igloo, an organization of settlers, adopted the small flower as their symbol in the early 1900s. With an endorsement from the Grand Igloo, the Third Territorial Legislature of Alaska adopted the forget-me-not as the floral emblem of Alaska, claiming it was found “on every hill and in every valley” and represented the “intrepid pioneers, who in spite of almost insurmountable obstacles and insufferable hardships, have opened for development a nation’s treasure house.” The resolution ends with a colonial-toned poem by Esther Birdsall Darling:

So in thinking for an emblem

For this empire of the North

We will choose this azure flower

That the golden days bring forth.

For we want men to remember

That Alaska came to stay.

Though she slept unknown for ages

And awakened in a day.

So, although they say we’re living

In a land that God forgot

We’ll recall Alaska to them

With our blue forget-me-not.

While the forget-me-not is lovely, it is difficult to argue that it is more distinctive and distinctively Alaskan than the fireweed. In 1972, Raymond Naddy, U.S. Forest Service forester and occasional Anchorage Daily Times columnist, more eloquently noted, “another flower simply does not out-gaudy a hillside of fireweeds.” Certainly, fireweed is more connected to Alaskan lore. Sourdough wisdom notes that the end of summer isn’t official until the top fireweed buds bloom, and those at the bottom have died. In other words, “when fireweed turns to cotton, summer will soon be forgotten.”

Calls to make the fireweed an official flower date back to at least 1930. Leo Bott, an Outside businessman who helped produce some of the first Alaska tourism and promotional material, called for the fireweed to replace the forget-me-not and be renamed the “fireflower.” Bott perceptively understood that something called a weed was unlikely ever to become a state flower, regardless of other charms. Still, the fireweed is the official flower of the Yukon Territory.

The Anchorage Times editorialized in favor of a state flower change in 1982. Their statement read: “there is nothing wrong with the delicate little forget-me-not,” but “the big colorful, hardy fireweed seems closer to the nature and character of Alaska and Alaskans.” However, there has never been anything like a real momentum for change in the Legislature.

In Anchorage, Fire Island likely and Fireweed Lane definitely are named for the vibrantly colored plant. Before Anchorage expanded after World War II, Fireweed Lane was a rustic gravel road walled on either side by towering fireweed during the summer. On the other side of Chester Creek and relatively far from town in the 1930s, Fireweed Lane was a popular spot for scenic drives. The decorative fencing in Anchorage’s Fairview neighborhood is in the community colors of fireweed and green. There’s also Fireweed Mountain in the Wrangells near McCarthy.

Fireweed is common throughout much of the northern hemisphere. In Canada, it is the willowherb. In the United Kingdom, it is rosebay willowherb. And in Russia, it is commonly called ivanchai for the tea brewed from it. “Ivanchai” becomes “Ivan’s chai,” and chai means tea.

The “fire” in the name derives not just from the vivid color of the flower itself but from its tendency to grow in areas cleared by fire. As fireweed favors open, cleared and dry land, it was among the first plants to grow in the wake of the 1980 Mount St. Helens volcanic eruption in Washington state.

Because of its tendency as the first arrival after devastation, many around the world associate fireweed with tragedy. For those that survived the 1941 bombing of London, the London Blitz, one of their most vivid memories was the post-bombing blooming of fireweed. Some residents called it nature’s revenge, that humanity had lost their right to the land in the face of such atrocities. British author Leo Mellor described fireweed as the “emblematic flower of the bombsites.”

J.R.R. Tolkien, an English World War I veteran whose sons fought in World War II, resumed writing his Lord of the Rings series in 1941, after a lengthy break and informed by the British homefront experience. Thus, fireweed appears in Middle Earth with negative connotations. In “The Fellowship of the Ring,” Frodo and company escape the Nazgul by entering the Old Forest. They exit the forest into a treeless “dreary place.” There, only grass and tall plants grow, including “fire-weed seeding into fluffy ashes.”

In Russia, fireweed reminds some of the victims of Stalin’s purges. One Russian described fireweed as “flowers of misery and of resilience; a perfect metaphor for a country of death camps.” Economist and philosopher Kenneth E. Boulding once asked, “Is the human race just a fire weed,” one that expects to expand forever “without ecological disaster.”

But in Alaska, fireweed has largely escaped the negative reputation found elsewhere. Here, fireweed is a popular and useful plant. Fireweed honey and jelly are available in many stores. You can make salads with younger fireweed before it grows bitter. Per the ASPCA, it is even non-toxic for cats, dogs, and horses.