In 1953, Cecil Wells was a rich and powerful Alaska businessman. His murder made headlines nationwide. 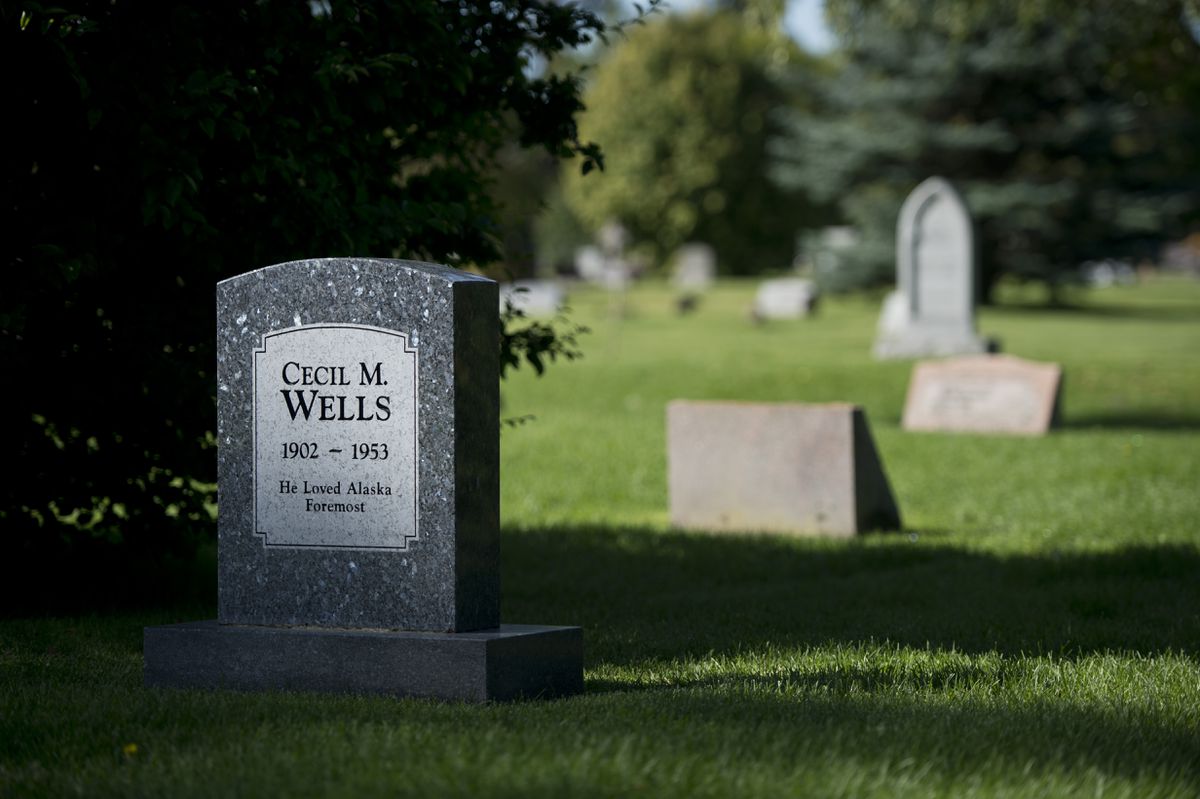 Cecil Wells was one of midcentury Alaska’s most powerful and prominent businessmen. He was a civic leader not yet at his peak at a time that Alaska was beginning to come into its own, just a few years before statehood. During a period when Alaskans thought everything was possible for their beloved territory, Wells’ brutal 1953 murder reminded Alaskans that nightmares are as possible as dreams. The sensational details, including a willowy blonde, jazz drummer and bungled police investigation, made the case one of the most notorious in Alaska history.

Cecil Wells was born in 1902 in Litchfield, Pennsylvania. In 1924, he drove his family to Seattle, where they boarded a boat for Anchorage. He tried his hand at a variety of jobs in town but nothing took. After a last-ditch, failed attempt at gold panning, he temporarily returned to the Lower 48 to work with his father. By 1929, he was back in Anchorage working in garages. He opened his own garage in late 1930, but he made his real fortune selling cars.

There were not yet car showrooms or lots in Alaska. If you wanted to buy a new car, you picked one out of a catalog and waited for it to be shipped from Outside. As could be imagined, this did not always work out great for the consumer. Those cars often arrived damaged or different from what the customer had ordered.

During the winter of 1932-1933, Wells obtained the rights to distribute Oldsmobile cars in Alaska and opened the Territory’s first car dealership in Anchorage. He expanded throughout the decade, adding distribution deals for General Motor, Cadillac, Pontiac, La Salle, Hudson and Terraplane trucks and cars. By the end of the decade, Wells Motor Company sold a hundred cars a year and opened a Fairbanks branch. In a move that eventually altered the local housing landscape, he also introduced the mobile home to Anchorage.

On Oct. 17, 1953, Wells’ neighbors in their exclusive Fairbanks residential tower found Cecil’s wife, Diane, battered, bleeding and crying in the hallway. Inside was Cecil, dead in bed with a large gunshot wound in his head. He was 51 years old.

The police investigation proceeded as poorly as could be imagined. Officers did not gather fingerprints and soon lost some of the evidence they did gather. Diane’s bloody pajamas disappeared within a day, likely kept or sold as someone’s perverse memento. Despite the bullet hole and exit wound in Cecil’s skull, the police initially believed he had been bludgeoned. Hours passed until officers finally searched the bed and discovered the empty cartridge from the fatal shot directly under a pillow.

Moreover, Fairbanks Police Chief E.V. Danforth initially refused to cooperate or share information with the district attorney’s office, U.S. Marshals, and Territorial Police (later the State Troopers). Under fire from all sides, Danforth begrudgingly agreed to open access to the case, though only after a five-and-a-half-hour meeting in the DA’s office. The U.S. Attorney for Fairbanks who forced the issue was none other than a not-quite-30-year-old Ted Stevens in his first public position.

Although Diane’s story changed over time, her primary claim was that two unknown males assaulted her with a flowerpot and killed Cecil. He was her third husband and 20 years her senior. On the other hand, she was Cecil’s fifth wife after decades of infidelities and short-lived romances. In 1928, Cecil served more than six months in prison for adultery. In other words, Cecil and Diane’s relationship was unlikely to end well, even if no one could have predicted the homicidal conclusion.

Police immediately suspected Diane and her lover, local jazz drummer Johnny Warren, as the actual murderers. Warren, also married, suspiciously left Fairbanks on the day of the murder, heading for Oakland where he was arrested. Eighteen days after the murder, a grand jury indicted Diane and Warren for first-degree murder.

Warren denied killing Cecil but admitted to a lengthy affair with Diane. Editors at the Fairbanks Daily News-Miner soon discovered a photograph in their archives with all three visible at a Fairbanks nightclub. Cecil and Diane were seated while Johnny played above them on the stage.

That Johnny was Black elevated the clamor and attention paid to the case. Murders are common enough but not interracial love triangle murders, more so in the 1950s. News publications across the country — including Newsweek, Life and Jet — seized upon the scandalous combination of the beautiful blonde, her older, cuckolded husband, and the Black jazz drummer. More people attended the court hearings than Cecil’s funeral.

The trial was scheduled to begin April 5, 1954, but never happened. On March 9, 1954, Diane committed suicide, downing 30 sleeping pills in a Hollywood hotel room. Two notes lay next to her body. The first described the pills. The second included the following message: “For one thing, I am guilty too, for ever seeing Warren. And if Warren is guilty, one thing for sure is—Cecil is dead. And I must be the cause of this, one way or another.” The autopsy revealed a recent abortion.

Though the charges against Warren remained open for another six years, the case against him was weak without Diane as a witness. No one was ever tried, let alone convicted for Wells’ murder. Warren more or less disappeared, at least from Alaska. Chief Danforth resigned under pressure just over a month after the murder. Stevens left Fairbanks in June 1956 for a post in Washington, D.C. And Cecil Wells was buried in Anchorage Memorial Cemetery.

Cole, Terrance. Fighting for the Forty-Ninth Star: C.W. Snedden and the Crusade for Alaska Statehood. Fairbanks: University of Alaska Press, 2010.