‘Trump Street’ starts a bitter fight over political signs, and much more, in the Alaska town of Eagle 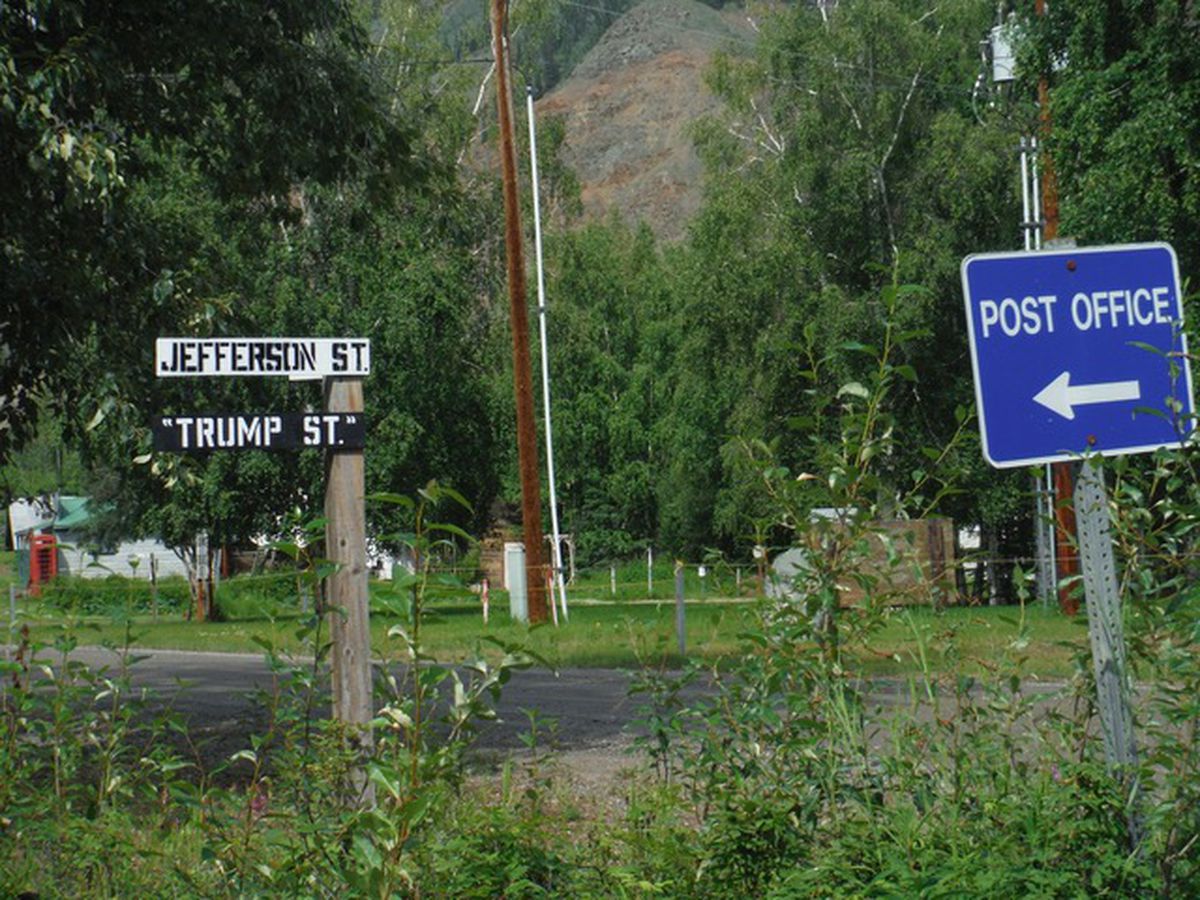 The trouble in Eagle started in June, when Jefferson Street became “Trump Street.”

Some in the Yukon River community in Alaska’s eastern Interior liked the name change. Others did not, and said the city government had acted illegally in allowing the sign.

All summer, a political sign battle raged in this tiny corner of Alaska. “Trump” has been spray painted on groves of aspen and spruce trees. Signs have been torn down. There have been public recriminations on Facebook. Both sides have accused the other of vandalism and intimidation.

The political divisions in Eagle aren’t much different from those in communities all over the country on the eve of a presidential election, a time of polarization and unrest, in the midst of an ongoing global pandemic.

Eagle is a hamlet of fewer than 100 people on a bend of the Yukon River, just a few miles from the Canadian border. The Gwich’in community of Eagle Village is situated about 7 miles up the river.

The town is remote, even by Alaska Bush standards. Big box stores in Fairbanks are a nine- or 10-hour drive away during the summer, the only time when a road link exists via the Taylor Highway. The state stops maintaining the road in October, and the town becomes a fly-in-only community.

Eagle made a starring appearance in John McPhee’s nonfiction Alaska classic, “Coming Into the Country,” which McPhee wrote while staying at a cabin near Eagle. Both the power of the landscape (“if it is not God’s country, God should try to get it”) and local government (“the debate had gone up out of the larynx and into the bulging eyeball,” he wrote of one city council meeting disagreement) earned mentions.

The area has always attracted people who chiefly want to be left alone to live as they please, said Mary Morris, a jeweler and former school secretary who has lived in Eagle since 1980.

“You have to be a little off-center to live here. This is not a town that attracts people who are in the norm,” said Morris. “And that includes me.”

When Morris and her husband first moved to Eagle to live closer to nature, she liked the fact that it was too small to burrow into a clique of exclusively like-minded people.

“In a large town you sort of can pick your group, find your tribe and hang out with people like you,” she said. “You can’t do that in a town this small.”

In Eagle, you have to interact with everyone: “Churchgoers and non-churchgoers,” she said. “Good ol' boys and hippies.”

When the town was devastated by flooding in 2009, neighbors helped neighbors. About a dozen people displaced by the floodwaters all had somewhere to stay within hours, Morris said.

When the community has found itself in heated disagreement, it has almost always been about hyper-local issues, like a planned cell tower or a proposal to build a new school facility.

National politics have never figured large in the minds of most people here, said Jeanne Tatangelo, a retired educator who has lived in Eagle for 40 years. Deep in Alaska’s Interior, one could hardly choose to live farther from Washington, D.C., both physically or psychically.

(Eagle was incorporated in 1901 after the gold rush boom in the region. The population peaked at more than 1,700 in 1898, but by 1910, most of the population had moved on and the town had shrunk to fewer than 200 residents.)

“I’ve come to question what I thought about this town,” Morris said.

Two decades ago, David Small floated the Yukon River from Whitehorse all the way to Emmonak near the Bering Sea coast. He stopped through Eagle on his way and decided it was the place for him. He says he was impressed by its tidiness and the way people treated one another.

“I spent years and decades actually traveling around the world and I found the best place ever,” said Small, a U.S. Navy veteran and former oceangoing sailor.

It was Small who came up with the idea to make Jefferson Street into Trump Street.

Small says he is not a member of a political party. Some of the political issues most important to him, such as abolishing daylight saving time, don’t come up much in mainstream politics.

He says he appreciates Trump because of his support of the Second Amendment, among other attributes.

“I really believe in the fact that God has big plans for America, big plans, and good plans,” said Small. “I think Donald Trump is God’s right arm.”

Other streets in town are already named after presidents — Washington, Adams, Jefferson, Lincoln. Why not, he thought, honor the current president by renaming his own street. Small said he asked the only other family living on Jefferson Street and the city council for permission and got the OK.

Small made the new Trump Street sign himself, following the black and white stenciled design of the existing sign.

He acknowledges that Trump is a polarizing figure.

“It is either you are very much for him, or very much against him,” Small said. “Nobody is without an opinion.”

People noticed the change immediately, said Tatangelo. Jefferson/Trump Street is the one that runs in front of the U.S. Post Office, the heart of a town that lives by the arrival of mail.

Some people didn’t much notice it, or mind. Others, like her, were outraged.

“I was outraged because the city’s business isn’t national business, it is city business. And I instantly understood the sign was political signage," Tatangelo said. “It appeared without any input from the community and I knew it was illegal.”

Tatangelo and some other residents launched a volley of emails to the mayor asking whether the street renaming could possibly be legal. There were letters to the city council, testimonials and other attempts at intervention by those who disagreed with the new signs.

The mayor, Daniel Helmer, said that Trump Street is only a ceremonial name, and was unanimously requested by the residents of the street.

“'Jefferson Street' is still the official street name," he wrote.

“Any other serious requests for ceremonial street names, with support from the street’s residents, will be considered by the council,” he said.

Then the controversy shifted into a guerrilla war of signs.

The corner of ‘One World’ and ‘No Justice No Peace’

Morris made her own cardboard Jefferson Street sign and slipped it over Trump Street.

One day, a fed-up Tatangelo decided that if Jefferson Street could become Trump Street, she could rename her corner too.

“So I carefully unscrewed the (street) sign, and instead of living on the corner of Amundson and 8th, for a very short time we lived on the corner of ‘One World’ and ‘No Justice No Peace,’” she said.

Other people renamed their streets. One couple named their crossroads after their dog and their granddaughter. Morris and her husband made an Obama Street sign but brought it inside every night at dusk.

Tatangelo says she was gardening one July day when she heard a vehicle pull up.

“I go running out there and it’s our mayor,” she said. “And his youngest brother, with a can of spray paint. They were going to destroy my sign.”

We’ve lived here all these years and have never fought about national politics, she told them. She pointed out that she was not renaming her street after a political figure, but values she felt were needed.

Helmer says that’s not exactly how it happened.

On July 3, Helmer and his brother showed up at Tatangelo’s makeshift sign intending to paint over what he said were illegal signs and then to stencil in the legal street names, he said in an email. Helmer said he was acting as mayor to enforce the law.

“As we were attempting this, an angry resident who lived nearby began shouting and swearing at us, and physically blocked our work,” he wrote. “She would not leave. She was the one who had removed the official signs, and replaced them with the unapproved slogans.”

The strange pandemic summer of the sign wars of Eagle ended, and fall is now well underway. Around this time of year, people are busy on the Yukon, hunting and harvesting their gardens and preserving food for winter. In town, people are still being cordial, waving at one another as they pass on the unpaved streets.

“I do think most people here seek to try to get along,” said Barry Westphal, a Kentucky-born pastor who has lived in Eagle for 25 years. “We are not seeking to hurt one another.”

Despite the efforts of the opposition group, Trump Street remains Trump Street. In a few weeks, the Taylor Highway will close for the winter and the community will become more isolated.

A few weeks after that, on Nov. 3, there will be an election. Who can say what will come after that.