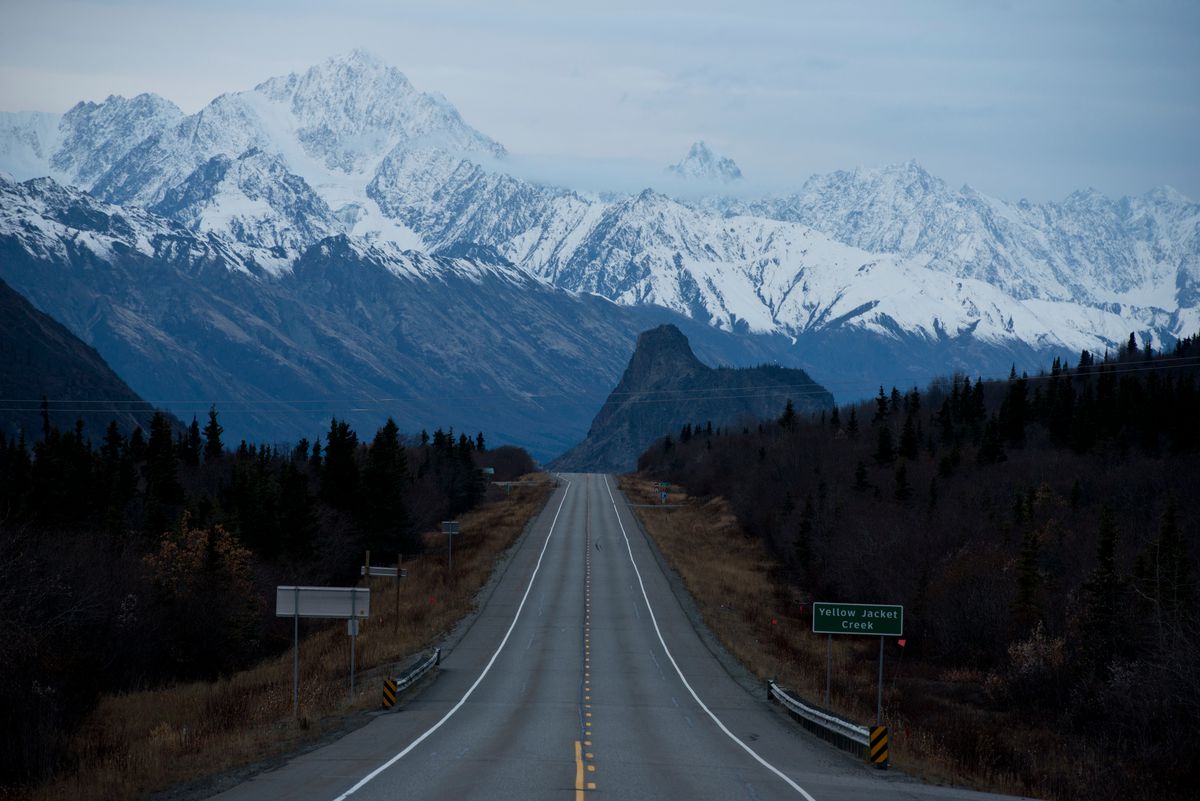 On Feb. 3, 1942, Morgan Edmunds, an Alaska Road Commission District Superintendent, announced the official naming of the Glenn Highway after career Army man, Edwin Glenn (1857-1926). To that point, the then-under-construction road was informally known as the Chickaloon Highway. Per Edmunds, the commission’s chief Ike Taylor, the Taylor Highway namesake, chose Glenn. As the Alaska Road Commission was an extension of the Interior Department, Secretary Harold Ickes had made the final approval on Jan. 26.

If an Alaskan knows anything about Edwin Glenn, they most likely know that the then-captain oversaw expeditions into Southcentral Alaska in 1898 and 1899, including the modern-day Glenn Highway area. His journals from this time offer a unique, if gossip-ridden, perspective of Upper Cook Inlet many years before there was an Anchorage. His 1898 diary is part of the collection at the University of Alaska Anchorage’s Archives and Special Collections and available to read online.

Those 1898-1899 expeditions are the reason why the highway was named after Glenn. Taylor and Edmunds likely knew little more about the man than the above. But Glenn spent two more decades in the Army, and his reputation outside Alaska is such that nothing else will be named for him.

In early 1900, Glenn departed Alaska for his new posting in the Philippines. With the Spanish-American War two years gone, the Filipino perspective of America had declined from potential liberators to the same old oppression under a new flag. Glenn arrived amidst open war between Filipino nationalists and American soldiers.

The Philippine-American War was marked by many American-committed atrocities counter to both American law and the 1899 Hague Conventions. Most notably, a common Army interrogation technique during this war was the “water cure,” what today is called waterboarding.

One soldier embarrassed by the practice detailed the process in a letter to an American newspaper. “Now, this is the way we give them the water cure: Lay them on their backs, a man standing on each hand and each foot, then put a round stick in the mouth and pour a pail of water in the mouth and nose, and if they don’t give up pour in another pail. They swell up like toads. I’ll tell you it is a terrible torture.” Another soldier described jumping on the tortured bellies after filling them with water, forcing them to vomit out the water so they could begin again. Also, the soldiers liked to use salty or filthy water.

On Nov. 27, 1900, Captain Glenn entered Igbaras on Panay Island, seeking information regarding the location of the rebel bases. The Presidente — mayor — of Igbaras, Joveniano Ealdama, was uncooperative, so soldiers stripped him to the waist, placed him beneath a water tank, and waterboarded him. According to witnesses, Ealdama “screeched terribly” at first, but then only gurgled, unable to scream.

After around 10 minutes of torture, Ealdama agreed to lead Glenn and his forces to insurgents. But when the Presidente refused further questions, Glenn ordered another waterboarding. This time, soldiers placed a hose in Ealdama’s mouth and pumped water into him. When that did not produce the desired result, salt was added, and the water injected into his nose as well.

Witnesses disagreed on how long this second round of torture lasted, from five to 15 minutes. Regardless, Ealdama eventually capitulated, and a soldier stomped on his stomach to expel the water.

A broad range of evidence and scholarship across centuries demonstrates that testimony gathered by torture is unreliable. As a third-century CE Roman jurist noted, “the strong will resist, and the weak will say anything to end the pain.” Ealdama’s coerced information proved false; there was no rebel base where he indicated.

Glenn returned to Igbaras enraged and ordered most of the town burned to the ground. Residents were allowed enough time to save themselves but not their belongings. Ealdama was tossed into a military prison. This was far from the only instance of Glenn waterboarding Filipinos, but it was the best documented. Glenn himself later confirmed the details.

It is telling that soldiers in the Philippines did not write down orders and instructions for waterboarding. Some Americans were disgusted by their experiences in the Philippines. Letters and returning soldiers began spreading stories. By the beginning of 1902, the American atrocities were a media sensation. Life magazine ran a waterboarding illustration on its cover. In the background, representatives from other countries smirk. The text at the bottom noted, “Those pious Yankees can’t throw stones at us anymore.”

The law was clear. Rules for soldier conduct in wartime then fell under the Lieber Code. Rule 16 of the code states, “Military necessity does not admit of cruelty — that is, the infliction of suffering for the sake of suffering or for revenge . . . nor of torture to extort confessions.” Under public pressure, Secretary of War Elihu Root and President Theodore Roosevelt ordered an investigation and prosecution of the guilty.

Glenn, by then promoted to major, was relieved of duty and court-martialed in May 1902. His defense strategy was simple to the point of cockiness. He admitted to waterboarding but denied it was torture. He went so far as to claim waterboarding “resulted in hastening the termination of hostilities.” He referred to the impending, July 2, 1902, declaration that the Philippine-American War was over. But that declaration was a political rather than military action. Organized Filipino resistance continued for many years.

Glenn saw the entire population of the Philippines as his and America’s enemy. Indeed, his written statement at his court-martial stated, “Every man, woman, and child in the islands was an enemy, and in my best judgement they are today and always will be.” There was no such thing as a loyal or good Filipino for Glenn.

Glenn was found guilty, suspended from command for a month, and fined $50 (roughly $1,500 in 2020 dollars). Apart from the quality of the punishment, the conviction made Glenn, by definition, a war criminal. Thus, the Glenn Highway, and half of Glennallen, for that matter, are named for a war criminal.

Glenn was soon court-martialed again. In December 1902, he was charged with ordering a subordinate to kill seven Filipino prisoners. The prisoners refused to lead Americans to a rebel base. They were shot and stabbed while still tied together. Glenn was acquitted.

It is worth noting that Glenn and his actions were broadly considered barbaric in their own time. The practice of waterboarding became public knowledge mainly because so many soldiers felt shame for witnessing and participating in torture. This is not a case of presentism, that historical sin of applying present-day virtues upon the past.

After Glenn’s first court-martial, Army Judge Advocate General George B. Davis submitted an angry memo to Secretary Root, claiming Glenn’s sentence was “inadequate to the offense established by the testimony of the witnesses and the admission of the accused.” Major General G.W. Davis, commander in the Philippines, disapproved of the acquittal from the second court martial and found Glenn’s “reckless disregard for human life” repulsive.

Still, Edwin Glenn’s career not only survived but prospered after two courts-martial and the evident disdain of his commanders. Promotions and commands kept coming. During World War I, he was temporarily promoted to major general. He retired in 1919 as a brigadier general.

Joveniano Ealdama was sentenced to 10 years of hard labor and then exiled from the Philippines. He lived the rest of his life in the Marianas Islands. He never returned home, never saw his wife or children again.

October is Filipino American History Month. Filipinos were in Alaska long before Glenn. The first known Filipino visitor to Alaska was aboard the British Iphigenia Nubiana in 1788. The captain’s journal mentions his unnamed, multilingual “Manilla-man” servant. In more recent decades, Filipino cannery workers in Alaska, Alaskeros, were a crucial labor source. That history has its own problematic aspects, including exploitation and wage gaps. To learn more about Alaska’s Filipino history, consider tracking down a copy of Thelma Buchholdt’s “Filipinos in Alaska: 1788-1958.”

Hajjar, Lisa. “Does Torture Work? A Sociolegal Assessment of the Practice in Historical and Global Perspective.” Annual Review of Law and Social Science 5 (2009): 311-345.