In ‘Extra Tough' exhibit, Anchorage Museum highlights resiliency and strength of women in the North 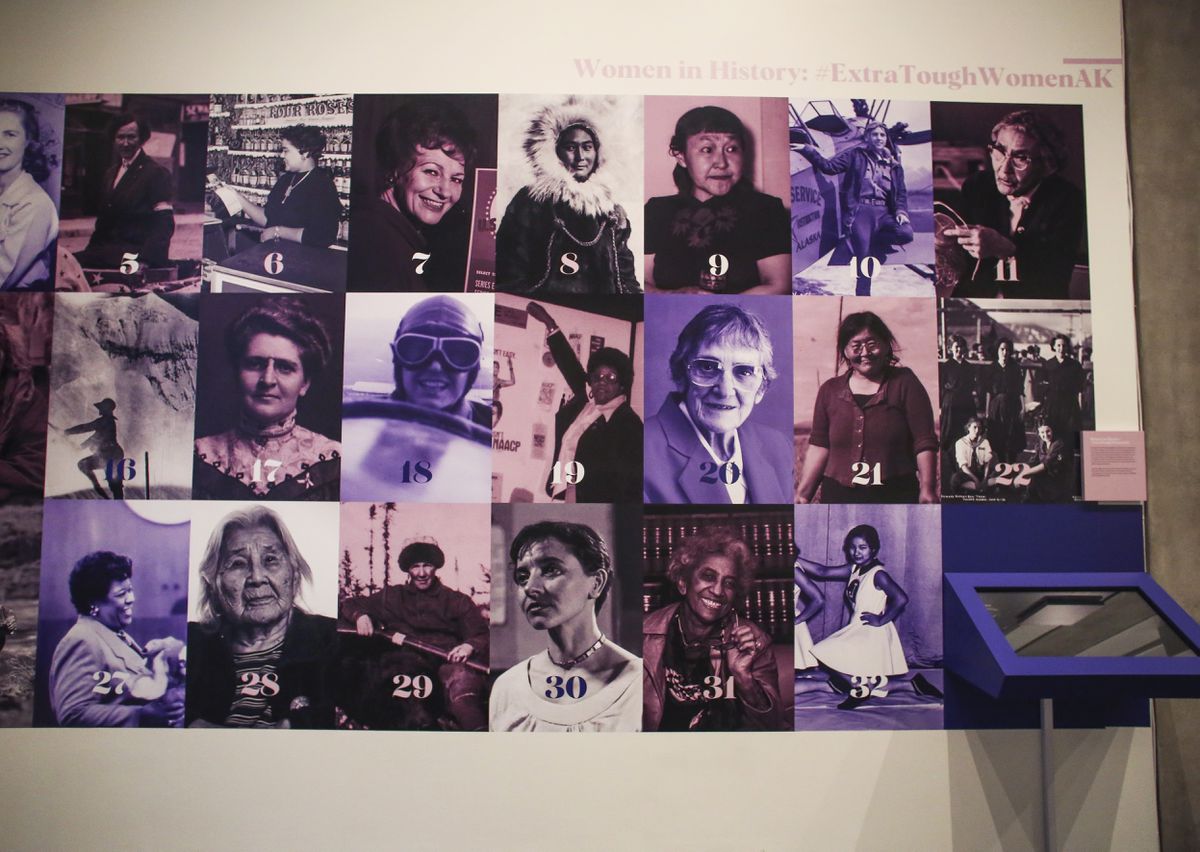 A "Women in History: #ExtraToughWomenAK" installation gives viewers the opportunity to learn more about historic Alaska women as part of the "Extra Tough: Women of the North" exhibit at the Anchorage Museum. Photographed on Nov. 10, 2020. (Emily Mesner / ADN)

A "Women in History: #ExtraToughWomenAK" installation gives viewers the opportunity to learn more about historic Alaska women as part of the "Extra Tough: Women of the North" exhibit at the Anchorage Museum. Photographed on Nov. 10, 2020. (Emily Mesner / ADN)

Nazi-fighting, reindeer-herding, radio-reporting women are front and center at the Anchorage Museum’s newest exhibit, “Extra Tough: Women of the North.” The show features artworks from female artists and profiles of women in Alaska’s past and present — including notable figures like Bettye Davis and Elizabeth Peratrovich.

“Women of the North” takes up the entire third floor of the museum and features themes surrounding women and society, women and place and women and work. The majority of the exhibit features artwork tied to Alaska, as well as artists from countries including Canada, Iceland, Finland and Russia.

When it came to profiling real Alaska women, "we were confronted with many challenges as you might expect trying to research the topic,” Anchorage Museum chief curator Francesca DuBrock said. “In particular, there haven’t been any really comprehensive or collective histories of women in the state; there are great gaps in omission and archives.”

Initially, all of the women the museum chose to profile were deceased, which presented its own set of obstacles. (The project was later expanded to include living Alaskans as well.)

“Sometimes we would find a photo in our archive that was really intriguing and the person seems very important, just based on the pose and context, and we could find no information,” DuBrock said. “Sometimes we’d find a photo and be able to find an obituary or something. Some people were really famous and we knew about them already, like Thelma Buckholdt, but we really didn’t have photos in our archive.”

The display features profiles on Alaska Native women, including Anfesia Shapsnikoff, a master Aleut weaver who traveled to communities across the state to teach basketry techniques, and Changunak Antisarlook Andrewuk, an Iñupiaq woman who alongside her husband became the first Alaska Native owner of a private reindeer herd. She eventually became one of the wealthiest women in the state by selling meat to Army men during Nome’s gold rush.

“The stories and contributions of women of color and immigrant women — particularly Black women — are really not well documented in the archive,” DuBrock said.

DuBrock says community members and organizations have been instrumental in helping identify women in photos, often providing a broader picture of the lives they lived. Since March, the museum has been profiling a woman weekly on social media and will continue to do so through the course of the exhibit.

“Our first woman we profiled, she was one that we found a photo of — the only reference we could find to her was her obituary, her name is Agnes Harrison,” DuBrock said. “She was really a wonderful, courageous woman. When we posted it, someone commented, ‘That’s my great aunt Aggie!’”

One part of the exhibit that DuBrock calls “affirmation chair” is an immersive experience where people can sit under parabolic speakers and listen messages from 50 people. The messages could include anything from words of wisdom to personal mantras. DuBrock says those recordings will eventually go online as well.

Alaskans are encouraged to share their own images and stories on Instagram and Facebook with the hashtag #ExtraToughWomenAK, which will be added to an online project curated by the museum.

“Extra Tough: Women of the North” will be on view through Sept. 6, 2021. Note: Due to COVID-19, Anchorage Museum hours for November remain 10 a.m. to 6 p.m. Wednesday through Saturday.

All events will be held online. For more information or to register, go to anchoragemuseum.org.

Being a Woman of Color in Alaska — A diverse group of women of color will lead a discussion about their experiences living in Alaska, moderated by YWCA Alaska CEO Theresa Lyons. Free. Noon.

Artist Spotlight: Ash Adams — Photojournalist and documentary filmmaker Ash Adams will lead a Q&A discussion on her workflow and experiences as a working mother in Alaska. Free. 4 p.m.

[Correction: Details about the “affirmation chair” in this story have been corrected to reflect that listeners do not use headsets. Also, a previous version of this story incorrectly spelled the name of Agnes “Aggie” Harrison.]