How well do you know Anchorage history? Take this quiz and find out 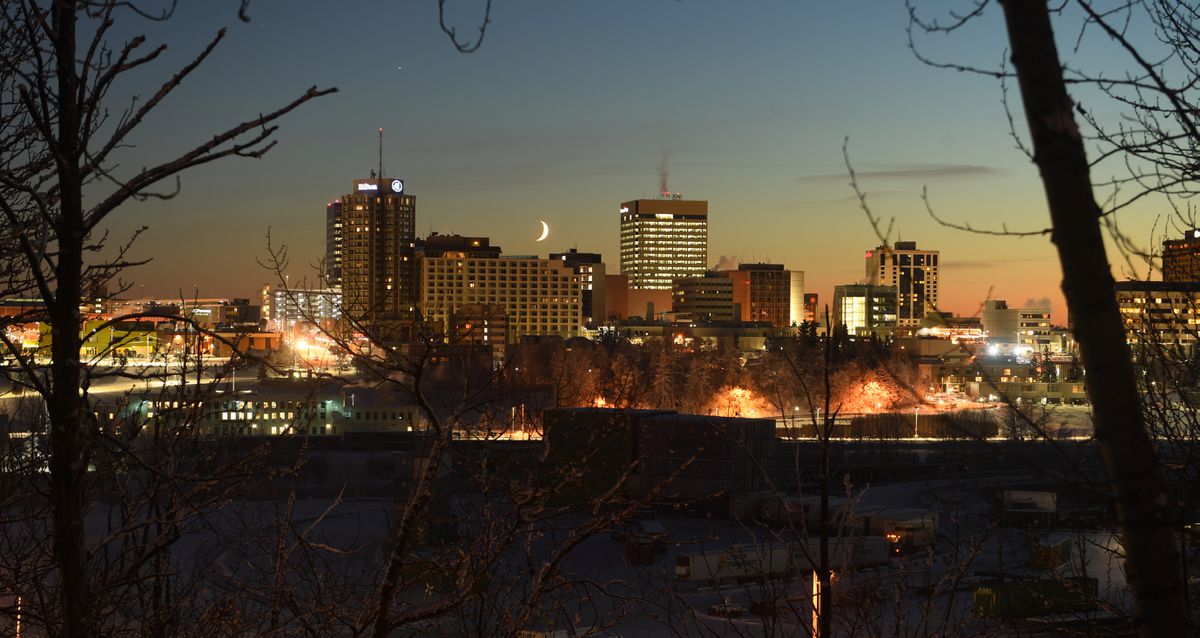 The crescent moon hangs among the buildings of downtown Anchorage just after sunset on Wednesday, November 18, 2020. (Bob Hallinen)

The crescent moon hangs among the buildings of downtown Anchorage just after sunset on Wednesday, November 18, 2020. (Bob Hallinen)

This article is the last of four celebrating 100 years since Anchorage’s incorporation. Last week we looked at the incorporation of Anchorage, the moment when a government railroad town become a self-governing city. This week, on this historic anniversary, we are testing your local history knowledge. How well do you know Anchorage?

1. Who or what is Anchorage named for?

A) Johnny Anchorage, a star of the early film industry.

B) General Theodore J. Anchorage, an Army commander for the Union in the Civil War.

2. What is Chester Creek named for?

B) A slang term for a drug dealer.

C) Planners were still angry about the policies of American statesman John Jay.

D) There is no J in the Swedish alphabet, and some of the Anchorage planners were Swedish.

4. Which of the following about Anchorage’s first police chief, Jack Sturgus, is TRUE?

B) He was born in Skagway and was the first Alaska police chief born in Alaska.

5. Entertainer Mr. Whitekeys is most commonly associated with which Anchorage neighborhood?

6. What was the original name for Northern Lights Boulevard?

7. In what year was the Anchorage city manager position created?

8. In what year did Pope John Paul II visit Anchorage and perform a mass at Delaney Park?

9. In what year were Fort Richardson and Elemendorf Air Base merged into the Joint Base Elmendorf-Richardson (JBER)?

10. In what year was Muriel Pfeil Jr. killed by a car bomb in downtown Anchorage?

11. Which of these future Major League Baseball stars did NOT play for the Anchorage Glacier Pilots before embarking on their professional careers?

12. Who or what is Russian Jack Springs Park named for?

A) A small dog species originating from Russia.

B) A type of cheese.

13. What is the next line from this commercial jingle? “Twin Dragon, Mongolian barbecue, can we cook up something, ________”

D) “something that makes you go woo.”

14. In what year did the first McDonald’s in Anchorage open?

A) She was intended for the San Diego Zoo, but a shipping error took her north.

B) She escaped a circus and wandered the Hillside for two years before being captured.

C) A Texan bought her as a baby and brought her to Anchorage as a pet.

D) An Anchorage grocer won her in a toilet paper contest.

17. Who were the Anchorage Parking Fairies?

A) Linny and Susan Pacillo, who filled expired parking meters.

B) Tony and Susan Knowles, referencing their love of parking lots.

C) A cute nickname for the EasyPark Alaska enforcement officers.

18. Where was Anchorage’s first combination golf course and airfield?

D) Valley of the Moon Park.

19. What was the first name for the neighborhood of Fairview?

20. In 1952, Prince Andy was stolen from his Anchorage home. Then worth an estimated $50, he was smuggled out of Alaska to Oregon, where law enforcement tracked down the thief. What was Prince Andy?

A) A member of a popular children’s music band.

B) An exotic dancer.

22. Which Anchorage church was the first predominantly Black church in Alaska?

23. What was the name of the Dena’ina fishing camp located at the mouth of Ship Creek before the development of Anchorage?

24. The first escalator in Alaska was located in what Anchorage department store?

25. Who is Muldoon Elementary named for?

B) Mysterious Will Muldoon.

27. Is a drunk cow the reason for Spenard Road’s winding path?

28. Within the boundaries of what modern Anchorage neighborhood was the city’s first red-light district located?

29. Who was Anchorage’s first mayor?

Give yourself one point for each correct answer. Zero to seven points, welcome to Anchorage! Eight to 14 points, not bad! Fifteen to 21 points, very good! Twenty-two to 28 points, you are a true Anchorage sourdough! Twenty-nine to 30 points, you are a scholar of Anchorage!

1. D: There is indeed a landlocked Anchorage in Kentucky that predates the Alaska Anchorage.

3. B: There was no J Company at Little Big Horn. Animus towards John Jay is sometimes, though erroneously, attributed as the reason why Washington, D.C., lacks a J Street.

5. A: Longtime residents will really laugh at you if you get this one wrong.

6. A: This is a trick question. Northern Lights Boulevard was originally called the Woronzof Road because it led to Point Woronzof. However, Woronzof Road was renamed KFQD Road, because of the radio station near the road’s western terminus, before being renamed again as Northern Lights.

10. C: Muriel Pfeil Jr. was killed in a parking lot across from the building that now houses Snow City Café. No one was ever charged for her murder.

12. D: Jacob “Russian Jack” Marunenko was separately convicted of bootlegging and murder in Anchorage but later become something of a beloved local figure.

13. A: The commercials for Fairview’s Twin Dragon Mongolian Bar-B-Q ran for many years with this earworm.

15. D: Anchorage grocer Jack Snyder won her from the Chiffon toilet paper company in 1966. He was given the choice of $3,000 or a baby elephant. He was supposed to take the money but instead chose the elephant.

16. B: Though the Glacier Pilots predate the Northern Knights, the former is an amateur, not professional, team.

19. D: Eastchester was renamed Fairview in 1954. Longtime residents might remember Eastchester Drugs (1952-1978), which maintained its original name. The owner had bought a new sign right before the change and didn’t want to buy another.

23. B: Qin Cheghitnu, Nutul’iy, and Ggeh Betnu are the Dena’ina names for Campbell Creek, Fire Island and Rabbit Creek, respectively.

26. C: The Lane Hotel fire of September 12, 1966 was the single deadliest event in Anchorage history.

27. B: Humorist Ruben Gaines created the legend of the drunken cow winding his way from Chester Creek to Lake Spenard for one his radio programs.