Why is it named that? In Anchorage, the answer is usually homesteaders 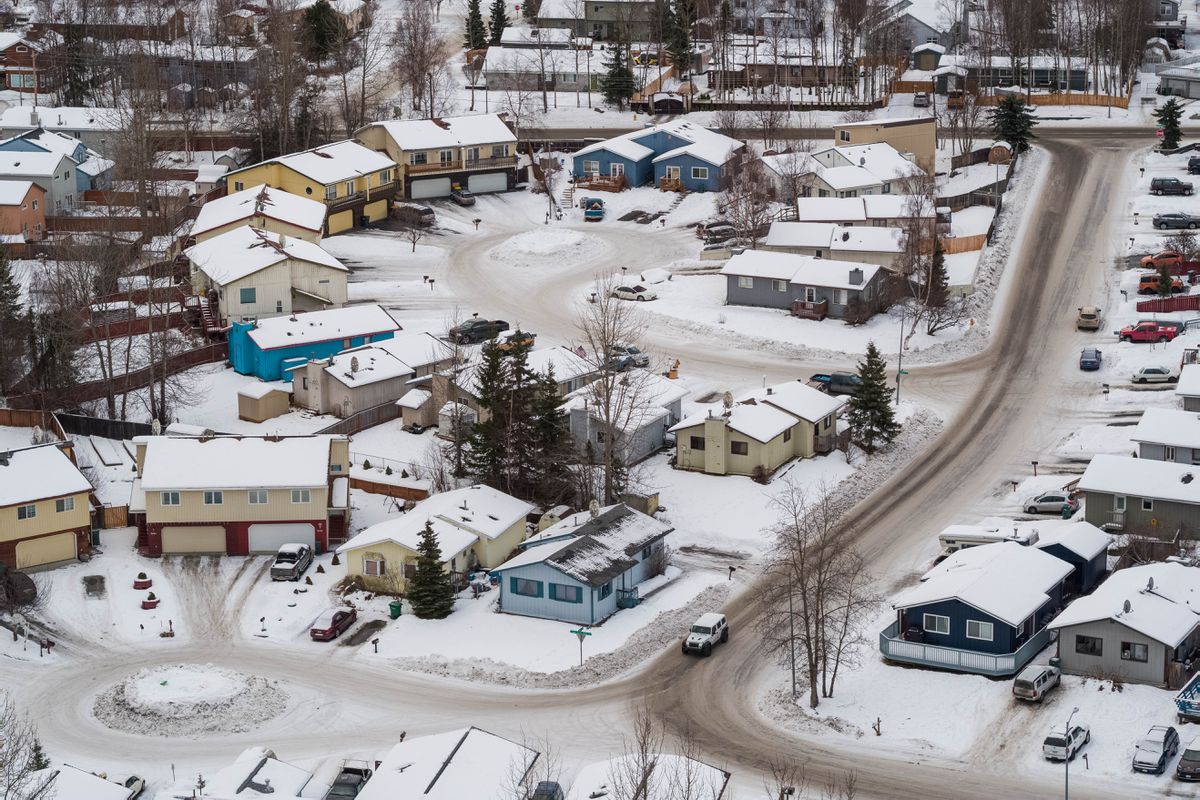 From my experience, the most common Anchorage history question can be summarized as “Why is it named that?” In Anchorage, the answer is usually homesteaders. A homesteader chose the name Mountain View. Homesteaders allowed Jacob “Russian Jack” Marunenko to build a cabin in what is now Russian Jack Springs Park. Homesteaders, including namesake Arnold Muldoon, built Muldoon Road. Klatt, Rogers, Abbott, Kincaid, Huffman, Klevin and Delong, among many other local place names, are relics of homesteaders.

Many Americans today consider themselves homesteaders, usually via a lifestyle characterized by small-scale farming, handicrafts and a general drive toward self-sufficiency. These Alaska homesteaders were different. People like Muldoon and the Klatts followed a formal process, a typically straightforward matter consisting of bureaucracy and hard work. But on one 1949 day, that process broke down into near madness, a lottery that determined the fates of more than 500 Alaskans and involved several familiar names.

Homesteading as undertaken and understood by Alaskans dates to the 1862 Homestead Act, though subsequent legislation amended the limits and requirements. Homesteading was extended to Alaska in 1898. In broad terms, there were three steps. First, the prospective homesteader visited the nearest land office and claimed a stretch of federal land. Second, the new homesteader lived on the land in a non-tent, habitable dwelling and cultivated at least an eighth of the property. This is what was called proving up. Third, the homesteader then filed for the patent, or legal deed, for the land. Only then did the homesteader own the land outright.

Homesteads were generally limited to a maximum of 160 acres. Russian Jack Springs Park covers 320 acres because it previously consisted of two homesteads.

For nothing more than a small administrative fee and years of possibly backbreaking labor, American men and women could make their dreams come true. Homesteading was a path to land and home ownership for many who otherwise would have had little opportunity to seize some part of the American dream.

The Federal Land Policy and Management Act of 1976 ended homesteading claims except in Alaska, where they continued through 1986. Preexisting claims could still be proven up. So, in 1988, Kenneth Deardorff became the last person to gain patent on a homestead, for a stretch in Southwest Alaska on the Stony River. Around 1.6 million Americans claimed more than 270 million acres across the country, about one-tenth of the land in America.

Homesteads surrounded early Anchorage. However, these homesteaders hugged close to the boundaries of the little railroad hub. There was understandably little interest in establishing a home in the boggy eastern and southernmost reaches of the Anchorage Bowl, miles from town.

The construction of Fort Richardson in 1940-1941 and the attendant economic boom was a seismic shift in Anchorage’s development. The 1940 Census found only 3.495 residents in relatively sleepy Anchorage. Between 1939 and 1945, the population tripled, and property values increased fivefold. By the 1950 Census, the city had exploded to more than 30,000 residents, though only a little more than 11,000 lived within city limits. Suddenly, there was more demand for homesteads in the Anchorage Bowl than available land.

In 1949, a large swath of land formerly reserved for the military was opened for potential homesteading. Rather than promote a run on homestead claims, the local land office chose to conduct a lottery for the available parcels. Only military veterans were eligible. Applicants still had to pay the regular filing fee, but losers received refunds.

The rules for the lottery included a dramatic quirk. Applicants chose their preferred parcel beforehand. If two or more people selected the same parcel, only the first name pulled for that land received a homestead. Thus, only the first name drawn was guaranteed to leave happy.

The lottery was conducted on May 10, 1949, at the land office. The 548 applicant names were sealed in individual envelopes and mixed in wastebaskets. Representatives from the Veterans Administration and the VFW officiated. Off to the side, land office officials marked off the newly claimed homesteads on a map.

While winners did not have to be present to win, many showed up early and pressed their way in. Mixed among the hundreds of applicants were intrigued locals, all hoping to witness the proceedings. More would-be onlookers spilled out the door but hung around within earshot of updates.

Though it was a chilly spring day, some attendees were undoubtedly sweating. Each new arrival saw the tightly packed throng and did the rough sums. With 548 entries, the far majority were going to leave disappointed. Homes, possible fortunes and entire life outcomes hinged on this drawing, but heartbreaks would outnumber celebrations. An edgy, nervous energy spread through the crowd.

The first name pulled was Burl Tudor (1920-2000). Before the lottery, he coordinated the creation of the Chugach Electric Association. After, he made a fortune in real estate, busily buying and selling properties before leaving Alaska for good in 1953. Besides Tudor Road and the CEA, his local legacy also includes three roads near the Alaska Native Medical Center named for his daughters: Leslie Street, Lynn Drive and Sharon Street.

Paul Boniface (1927-1991) was the third name pulled. He chose a parcel near the intersection of what is now Boniface Parkway and Northern Lights Boulevard, though it would be several years before the latter reached that far east. From a one-room log cabin, he made his way into real estate and was a member of the Greater Anchorage Area Borough Assembly in the 1960s. When pronounced correctly, Boniface rhymes with “face,” not “fuss.”

The first seven names called all successfully received their homesteads. Tragedy struck with the eighth name. The officiants called William Malcolm’s name, but his desired land had been claimed by one of the preceding seven winners. So close yet so far from his dreams.

The 11th name called was Harold DeArmoun (1924-2020). His lack of frontier experience fed a somewhat naïve optimism in the young Californian. He only claimed 80 of the possible 160 acres and planned to claim another 80 acres on the Kenai Peninsula. That dream evaporated when he and his wife, June, discovered the difficulty of improving a single homestead. Their parcel had no water source, and they were a mile from the nearest road. In 1950, he and a friend used a tractor to blaze a route to the homestead, the road that bears his name today. Though Harold and June later moved to Mat-Su, they remained in Alaska for the rest of their lives, dying only four months apart.

Herald Stringer, a local attorney, was the 12th name pulled. Like Malcolm, he also lost his bid to a previous claim. The 46th name called, Von Baxter (1916-1999), was luckier. He not only won his homestead claim, but his name survives on a park, road and school.

The last successful name pulled came on the 410th drawing. Through luck and a desire for an otherwise unwanted parcel, Ernest Matz (1922-1992) won his claim. Though he lived in Anchorage for the rest of his life, he failed to prove up on that homestead.

The lottery lasted over two hours as officials meticulously drew, called and recorded each name. Only 52 of the 548 applicants successfully claimed a homestead. The rest did something else with their lives.

There was an odd though fascinating coda to the 1949 land lottery. The same day the Anchorage Daily Times and Anchorage Daily News ran articles on the homestead lottery, they also published updates on the Chena and Nenana Ice Classics, pool contests where participants guess the moment when the river ice breaks up. The next day, Anchorage Postmaster Herbert Brown informed the newspapers that due to prohibitions on the mailing of lottery information, the Post Office could not mail copies of either paper.

The ice breakup pools had run for many years by this point. And as Times publisher Bob Atwood acerbically noted, the land lottery also included entry fees and an “award by chance.” Thus, this coverage, when mailed, also violated the letter of postal policy. As it turned out, Brown enacted the ban only upon orders from higher up. Copies of the offensive issues were mailed for review to Washington, D.C. In the meantime, neither local paper was mailed.