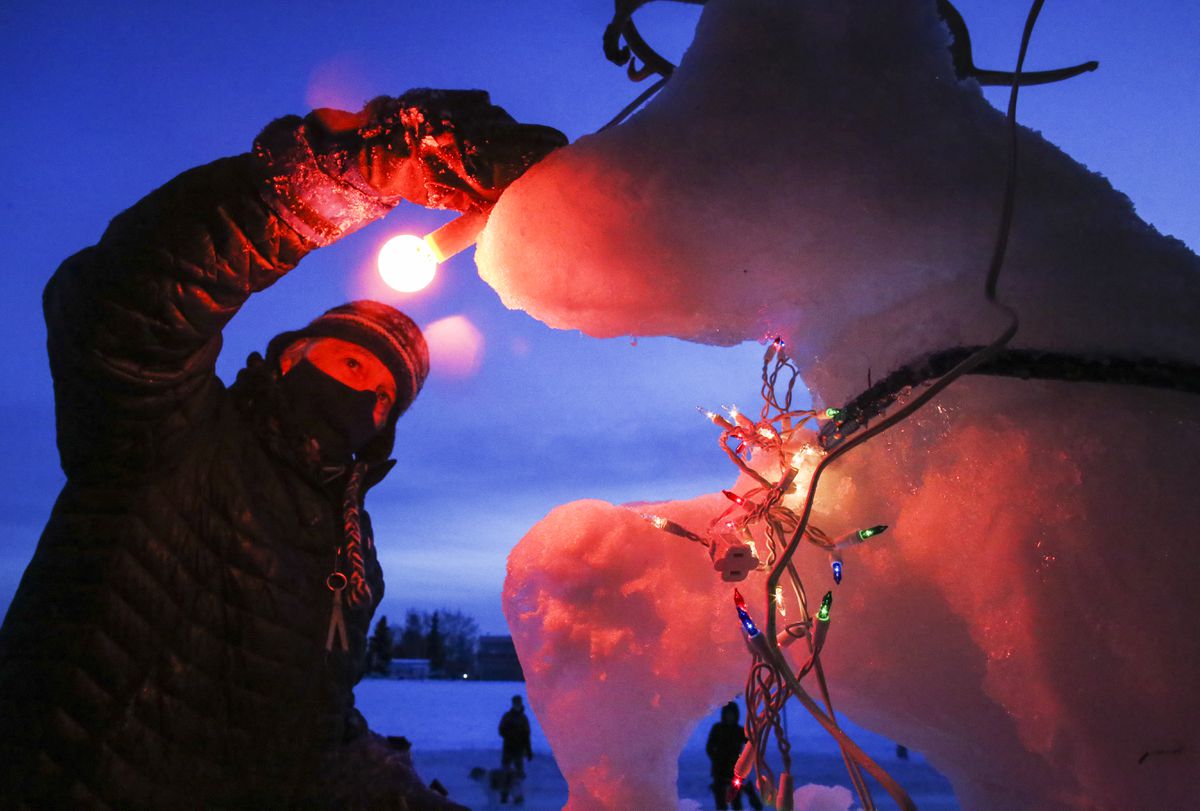 Passersby watch as Jimmie Froehlich attaches a red nose to an ice sculpture of Rudolph he and other volunteers made outside a home on the west end of the Delaney Park Strip in Anchorage on Friday, Dec. 11, 2020. (Emily Mesner / ADN)

Passersby watch as Jimmie Froehlich attaches a red nose to an ice sculpture of Rudolph he and other volunteers made outside a home on the west end of the Delaney Park Strip in Anchorage on Friday, Dec. 11, 2020. (Emily Mesner / ADN)

The west end of the Delaney Park Strip, a usually quiet corner of downtown Anchorage, was buzzing with activity recently as volunteers crafted an ice sculpture of Santa Claus and Rudolph the red-nosed reindeer — prompting a visit from local celebrity Star the Reindeer himself.

Albert Whitehead, Star’s owner, brought over the reindeer Friday afternoon. That gave volunteer Jimmie Froehlich a reference point as he sculpted ice blocks into the shape of Rudolph. Whitehead hasn’t been able to have classrooms visit Star this year due to the pandemic, but for a brief moment Friday, children and adults smiled as they fed Star carrots and watched the ice sculpting.

“It’s always interesting to see what they come up with next,” Whitehead said. “(It) makes the neighborhood feel better.”

Around 4 p.m., it became too dark to see details in the ice, and Froehlich made his finishing touches to the sculpted reindeer. Rudolph — crowned with Star No. 3′s antlers — stood proudly on an ice chimney, pulling Santa’s musher-style sled, which was previously used in the Iditarod. Tommy O’Malley, who helped coordinate the sculpting effort, energetically gathered strings of lights and within minutes, the sculpture came to life.

“Wow, good job!” said a young child from the backseat as he rode past.

“I think ice carving is something that is very Alaskan,” Froehlich said. “Most people can identify with it. It plays to our strengths.”

Robert Gottstein, who is currently residing in Hawaii, asked O’Malley to complete the sculpture outside Gottstein’s Anchorage home on West Ninth Avenue. It’s the third year that Gottstein has arranged such an effort.

“I’m a friendly guy, you know, people enjoy it,” Gottstein said. “It just adds to people’s lives ... it’s a small gesture for me to do this for people.”

Gottstein said he had 5,000 to 6,000 pounds of block ice delivered to his house from his company, Purely Alaskan Premium Ice, for the sculpture, which was built next to two large Ruth Bader Ginsburg posters.

“I do that because I want to memorialize good people,” he said. “I think a great display is to keep her up and have Rudolph flying off the roof after dropping Christmas gifts to kids, flying over Ruth, on Santa’s way to the next roof.”

Volunteers driving by, or who O’Malley scouted, gathered to help mold, shape, decorate and chisel the ice as temperatures dipped into the low teens Friday.

O’Malley reached out to Trace Edmundson, his former kindergarten student who is now 18, to have him help too. On Dec. 4, Nathanael Busath and Hayden Riddle, from The Church of Jesus Christ of Latter-day Saints, were driving by and stopped to check it out. O’Malley handed them chisels and encouraged them to help. They returned the following Friday. “Our job as missionaries ... just look for ways to help out,” Busath said.

“Tommy and I joked the other day, this is Santa Claus. I’m Jewish and he describes himself as a pagan,” Gottstein said, laughing.

“I love that he does it for the community,” O’Malley said.