An Anchorage nurse began her career just as the pandemic reached Alaska. ‘I had no idea what I was getting myself into,’ she said. 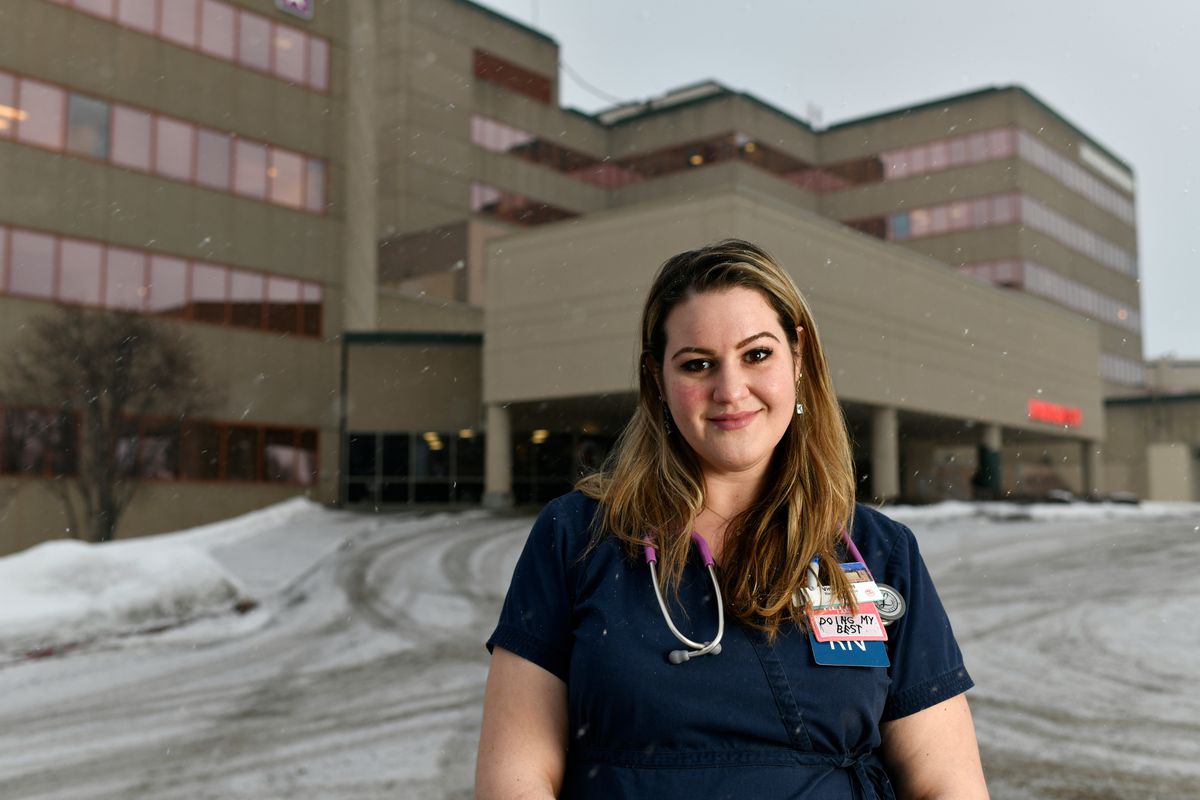 A year ago, Virginia Benson graduated from nursing school. She has spent most of her first year caring for patients in the COVID-19 unit at Alaska Regional Hospital. (Marc Lester / ADN)

A year ago, Virginia Benson graduated from nursing school. She has spent most of her first year caring for patients in the COVID-19 unit at Alaska Regional Hospital. (Marc Lester / ADN)

Sometimes, during her long shifts on Alaska Regional Hospital’s fourth floor, nurse Virginia Benson feels anxiety roiling inside and needs a moment to pause and breathe as COVID-19 distresses swell all around.

In one room, a patient’s blood pressure might be dangerously climbing while another’s blood sugar falls. Someone in a third room might need more oxygen. All require immediate attention.

Benson, 32, reflected on her job nearly a year to the day since she graduated from UAA’s nursing school, an accomplishment she considered the hardest thing she had done at the time. She looked forward to stability and routine as she launched into her career, unaware that the greatest health crisis in generations was just months away.

Now, nine months since the start of the pandemic, the registered nurse is improving, she said, and motivated to make a difference case by case. But it’s also true that some days she feels exposed and vulnerable. Benson shared her new-nurse experiences with a shallow laugh that couldn’t fully mask her frayed nerves.

“I had no idea what I was getting myself into,” she said.

Before she landed her job at Regional, Benson recalled hearing something about a virus from China, but it didn’t seem real at the time. Then she noticed tightening security and temperature checkpoints at hospital entrances. “I was like, ‘Is this all about that COVID?’ ” she said.

It was in a news report that Benson learned the medical overflow unit, or MOU, would be a big part of Regional’s COVID-19 readiness strategy. That’s where she had been hired to work. After weeks orienting with the surgery department, the weight of her involvement in COVID-19 care landed in her consciousness with a thud. On her first night in the MOU, one coronavirus-infected patient had a stroke. Another needed intubation.

“It opened my eyes. This is real life and death,” she recalled thinking. “Here it is.”

The MOU is often the first stop for admitted patients with confirmed or suspected COVID-19 infections. Some are transferred there from other hospitals in the state. Think of the MOU as a broad middle tier between medical units, which typically see people who are less critically ill, and the ICU, which tends to the sickest of the sick. Patients in the 19-bed MOU, also called the COVID unit now, can move in either direction as their wellness advances or declines. Some are there for end-of-life comfort care.

Viewed in the most generous way, Benson’s first year has been nothing if not good experience. Each patient has a unique combination of symptoms and circumstances she’s learning to recognize and respect. Marco Castillo, a charge nurse in the MOU, said Benson has been confident but also willing to ask for help. Benson has adapted well in difficult and constantly evolving circumstances, he said.

“It’s a very difficult time for nursing in general, but this department more specifically is one of the more difficult ones to start in,” Castillo said.

Benson has treated patients who battle COVID-19 while also fighting through withdrawal effects from drug or alcohol dependency. There are elderly women who understand little English, with whom she tries to communicate and connect. There are patients who admit suicidal thoughts under the crushing weight of pandemic isolation.

There are even the patients, perhaps twice a month, who deny that COVID-19 is real, even as they breathe with oxygen tubes dangling from their nostrils.

“I get a report from the emergency room, this is the patient, this is what they’re here for,” Benson said. “Then they say, ‘By the way, they have COVID, but they say that COVID doesn’t exist, so they refuse to wear their mask in the hospital.’ ”

She said she tries not to be “judgy,” not to get jaded or callous, and to keep the same high standard for everyone in her care. She also leans on her faith.

“Jesus and coffee, and that gets you through, one room to the other,” Benson said.

If she is getting better at her job, she credits the bonds formed with the people around her. That starts with the charge nurses and experienced staff members.

“Everybody has taken me under their wing and taught me what they know,” Benson said.

Benson said she has also developed relationships with patients, even those who are too fatigued to converse. When she can, she spends time in each room. She’ll tell them about her four cats, Bubba, Casca, Meeka and El Tigre. Or she fills them in on the details of their treatments, and then tells them about her cats, even if they can’t respond.

“They’re still there. They can still hear me,” she said.

Dieter J. Saunto, who was a COVID-19 patient in the MOU for a week in November, described Benson as not only technically capable, but personable. That’s a quality that takes on outsized importance in an atmosphere he described as sterile, noisy and solitary.

“She was extremely compassionate and could read you as a patient,” said Saunto, who is also the hospital’s director of programmatic development.

Interactions can move Benson in unexpected ways. Recently, she helped an elderly COVID-19 patient who was being treated for pleural effusion, a condition in which fluid collects in the space around the lungs. The fluid needed to be drained, a painful process, she said.

“This little grandma, she was holding on to me, like embracing me when she was bent over, so they could put the needle in her back. …” Benson said. “It was almost like she was comforting me, because I haven’t had a hug from somebody besides my husband in I don’t know how long.”

Sometimes the health care team is all a patient has. The hospital typically doesn’t allow COVID-19 patients to have visitors, except in end-of-life situations. Even then, it’s not always possible because family members are out of state or they have COVID-19 themselves. Benson does what she can, arranging pictures that the family sends to the hospital room or helping patients connect to their families through video calls.

From a distance, she may say her own silent prayer as a patient lies dying. After a death, she must navigate carefully as she speaks to family members. Sometimes they simply want medical information. Other times it’s better to listen and empathize as they grieve.

“It’s stressful. I go home and sometimes my husband will ask about my day, but I just have nothing I really want to say because I’m just sad,” Benson said.

“Death is not just a number. It really takes a toll on each and every one of us,” she said.

The job’s intensity has grown in recent months. A few months ago she had her first experience with a patient who “coded,” a high-priority medical emergency that usually means extreme heart or respiratory distress. People shouted instructions across the room for meds, oxygen and a defibrillator.

“It’s like TV almost, but it’s real life. And that’s somebody’s grandma lying there. It’s heartbreaking,” she said. “And then you finally get to pass off the patient to ICU and you go back to your unit, and you’re late for your next patient’s meds.”

The MOU has never been busier than it has in recent weeks. Sometimes when she shows up, she can’t get on the clock quick enough before an urgent situation erupts.

On a recent shift, she got a call from the emergency room 30 minutes before her day was supposed to end. Three more patients were on the way to her. Each would need to be set up with an IV pump, a heart monitor and leg compression devices. Each would also need a full assessment.

In moments like those, Benson has learned not to think about the dinner that might be waiting at home, and to be mindful of not making a patient feel like a burden.

“I do this little spiel where I say, ‘Welcome to the executive suite. This is the presidential penthouse suite. You’ve got a beautiful view of Merrill Field over here,’ ” she said.

Alaska Regional Hospital’s COVID-19 unit has not yet hit maximum capacity, according to chief nursing officer Kevin Worley. On busy days, though, Benson said it’s not hard to imagine the challenges that could come from a staff stretched too thin by rapidly rising case counts.

“It’s scary because my No. 1 concern is safety, and I don’t want somebody to be overlooked or slip through the cracks because we’re so overwhelmed,” Benson said. “And I see that happening. I see that being a reality in the future if we become so overwhelmed.”

In the evening, once she’s finally home, Benson throws her scrubs in the washing machine and showers, even before she greets her beloved cats. She pulls on her fuzzy socks and pajamas and eats the dinner her husband has waiting. Then fully drained, she passes out.

It’s a lifestyle that has taken a toll in her profession. Burnout has led some nurses to retire, she said. Others feel the risk to their own household is too great to be involved at all. Benson understands. She’s not sure how she’d get by if she had kids, she said. But for now, she’s managing.

“I feel like I’m still young enough to handle the kind of stress that it is giving me right now,” she said.

Even on days off, work concerns flash in her mind. Last week, while she applied IcyHot to her feet, she wondered about a patient who wasn’t critically sick, but who was tearful and frightened. She suggested the woman consider adopting a kitten. She recalled another man who shared her affinity for Frank Sinatra and Bing Crosby holiday songs, which she played him on her phone.

She even recalled a visit to the supply closet, and the oddly compartmentalized thoughts she had there.

“I noticed that we had a surplus of body bags in stock. And I was noticing that these must be from a different manufacturer, because these body bags look like they’re cheaper material. …” Benson said.

“Why am I sitting here thinking about body bags at home?” she asked herself days later.

These days, Benson said subtle rewards go a long way, like the highs she feels when her intuition proves right. Sometimes a doctor notices her good work and pauses to commend her. Sometimes a patient or a family member expresses love.

“I still get insecure as a new nurse. They make me feel good when they tell me that I did a good job,” she said. “I guess maybe I need that verbal affirmation.”

That’s what gets her out of bed at 4:45 a.m., at least three times a week, to start her 12-hour shift once more. She laces up her running shoes and heads into work on quiet streets, unsure what the day will bring.

She drapes her badge over her neck. On the lanyard, she also displays a name tag that says, “Hello. I am doing my best.” When she gets there, she thinks about which patients face the greatest risk and which she might be able to help in a dark season.

“This is exactly the job I wanted,” she said. “I wanted to be a nurse.”