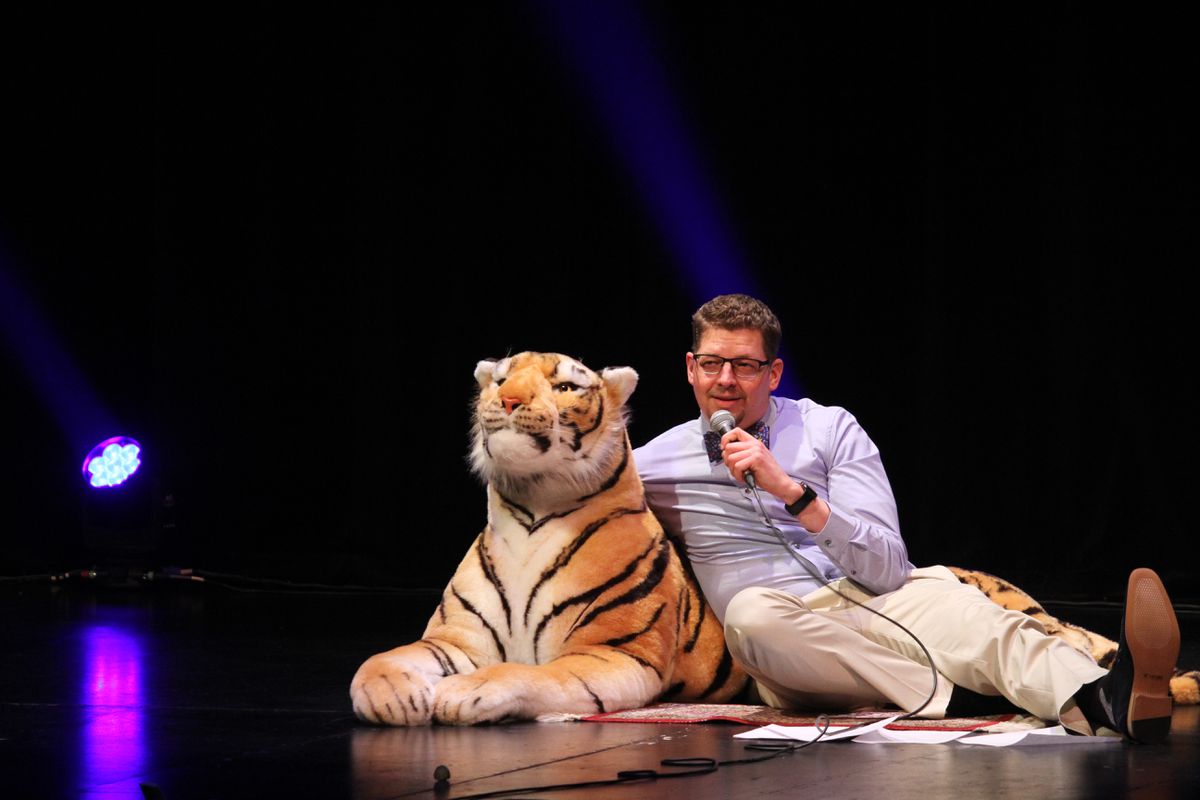 When Robert Prince is trying to find subjects for his podcast, “Dark Winter Nights,” he says it’s as simple as asking someone: “Have a crazy story?”

“Regular Alaskans walking down the street who look no different than anybody else have some of the most nuts experiences — they have been in plane crashes, they have been chased by bears, been thrown out of rafts and nearly drowned,” Prince said. “That’s the way it is up here.”

Prince, who teaches documentary filmmaking at the University of Alaska Fairbanks, has been hosting and producing “Dark Winter Nights” alongside a group of volunteers since 2014. Subscribers have more than doubled recently, from around 1,500 to more than 3,000, after the podcast was highlighted in a list of 2021 winter podcasts in The New York Times.

“Dark Winter Nights” is a podcast, but also a radio show and a place for live storytelling opportunities — similar to that of Arctic Entries out of Anchorage and Mudrooms in Juneau. Prince said the idea originated from wanting to tell authentic stories from Alaskans.

“We knew that if we could stick to it and keep going with the show, eventually we would reach some kind of success because the stories here are just unparalleled,” Prince said.

A complete archive of more than 40 episodes can be streamed through its website. “Dark Winter Nights” is available on Google Play, iTunes, Pandora, Spotify and wherever you stream.

Here are some more Alaska podcasts to add to your list:

“Crude Conversations” — Host Cody Liska of Crude Magazine speaks with a new person each week on what it means to be Alaskan. Guests have included local politician Forrest Dunbar, photographer Brian Adams and writer Kate Trefry of “Stranger Things.” The podcast began in 2018, with over 130 episodes that can be streamed on Apple Podcasts, Spotify, Amazon Music and Google Podcasts. Liska also hosts a podcast in conjunction with the Anchorage Museum, “Chatter Marks,” focused on creative and critical thinking in the north.

“Coffee & Quaq” — Alice Glenn celebrates and explores contemporary Native life in urban Alaska, while sipping on this (coffee) and chewing on that (quaq, or raw, frozen meat). Glenn is from Utqiaġvik and lives in Anchorage. Podcast conversations include decolonizing beauty, hunting whale practices and water and sewer infrastructure in rural areas of the state. “Coffee & Quaq” can be streamed on Apple Podcasts, Spotify, Google Podcasts and through Glenn’s website.

“Elders: Words of Wisdom” — This podcast from the National Resource Center for Alaska Native Elders at the University of Alaska Anchorage explores elder wisdom and care, featuring voices including politician and author Willie Hensley and Chris Klabunde of the Southcentral Foundation Elder Program. Each episode is less than 10 minutes, examining topics varying from elder abuse to traditional foods like salmon cakes and venison sausage. The podcast can be streamed on Spotify, Apple Podcasts, Podchaser, YouTube and more.

“Humans Outside” — Amy Bushatz explores Alaska while hearing from outdoor enthusiasts about spending more time outside. Topics include creating a habit of getting out, how to make the best coffee outdoors and the best gifts for nature-lovers. The podcast can be streamed on Spotify, Stitcher, iTunes. Google Play and on its website.

“On the Land” — Deenaalee Hodgdon tackles conversations in a time of climate insecurity alongside other Indigenous people — including how to gather traditional plants and foods ethically and respectfully. “On the Land” can be streamed on Apple Podcasts, Spotify, Google Podcasts and Alaskacast.

“The Voyager’s Podcast” — Producer and host David Glenn Taylor interviews the most interesting people he can find, including Iditarod juggernaut Dallas Seavey and former Alaska U.S. Sen. Mark Begich. The podcast has 15 episodes and can be streamed on Apple Podcasts and Spotify.

“You and I 4 the Kenai” — Conversations surrounding the stigma of addiction and how to properly administer Naloxone are front and center of this podcast, which is made in partnership with Change 4 the Kenai, a Central Kenai Peninsula coalition addressing substance use and abuse. The podcast began in June 2018 and can be streamed on Spotify, Stitcher, Soundcloud, Facebook, Google Play and more.

“Native Artist Podcast” — Produced out of Alaska-based Koahnic Broadcast Corporation (home of KNBA), this show features indigenous artists spanning a range of disciplines, from film to carving to fashion. The show is hosted by Alexis Sallee, who also hosts and produces the music program Indigefi.

Know of a great Alaska podcast currently being made that we missed? Email play@adn.com.