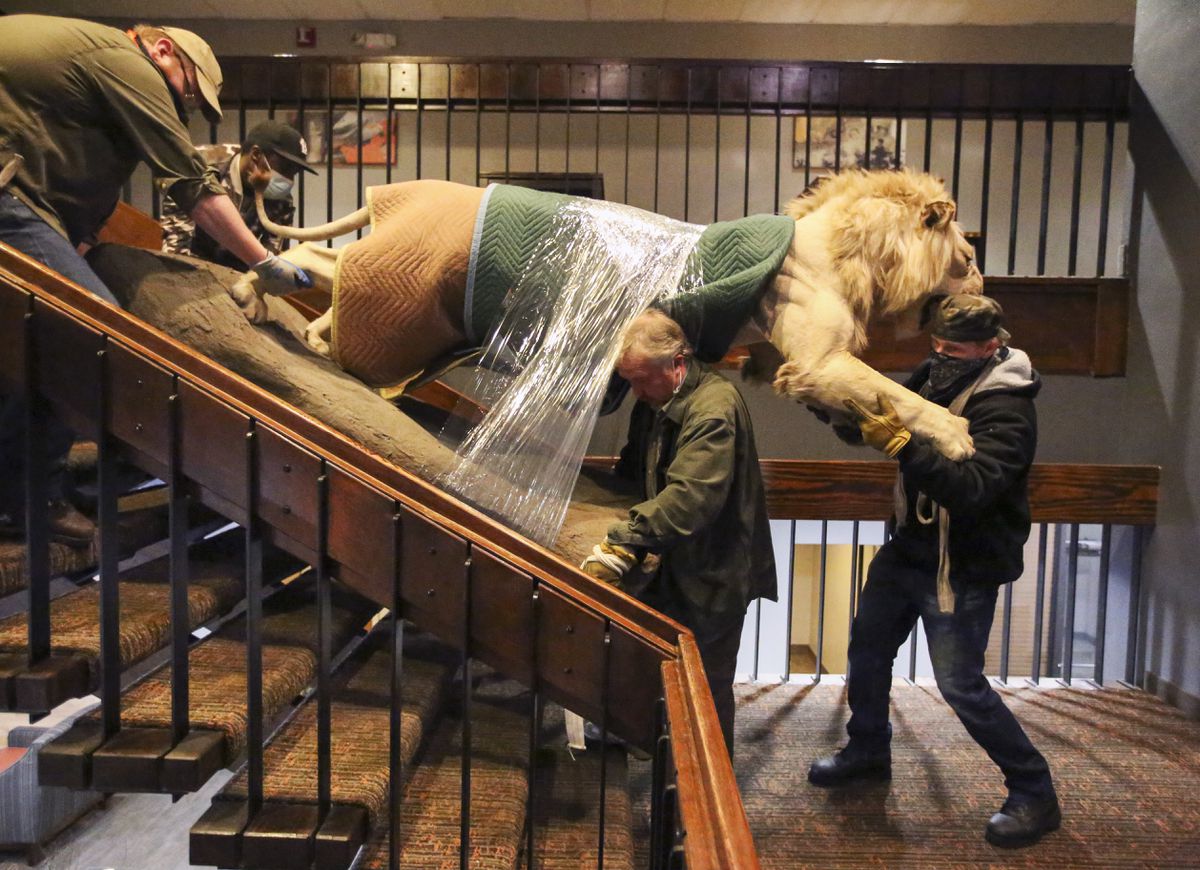 Larry Allen, center, guides the base of a taxidermy lion down the stairs of the Best Western Golden Lion Hotel while William Merkley, right, braces the arms and Christopher Pettway and Tranetti Fernandez hold the back on Tuesday, Feb. 16, 2021. (Emily Mesner / ADN)

Larry Allen, center, guides the base of a taxidermy lion down the stairs of the Best Western Golden Lion Hotel while William Merkley, right, braces the arms and Christopher Pettway and Tranetti Fernandez hold the back on Tuesday, Feb. 16, 2021. (Emily Mesner / ADN)

A nearly 50-year-old stuffed lion was moved from its longtime home at the Best Western Golden Lion Hotel in Midtown Anchorage last week.

Now its new owner is taking suggestions from the public about where the lion should go next.

William Merkley, a mover with Allen’s Professional Moving Services, has relocated plenty of taxidermic lions, wolves, bears, giraffes and elephants over the years.

On Tuesday, he helped wrangle the lion at the Best Western down from the hotel’s upstairs lounge.

“You’d be surprised at what some of the homeowners have around here,” said Merkley, who estimates he’s moved between 30 and 40 lions.

The hotel, no longer open, was purchased in December by the Municipality of Anchorage as part of a controversial plan to convert the property to a drug and alcohol treatment center.

Original hotel owners Jerry Groseclose, GJ Red Huggins and Jack Linton built the hotel “from the ground up,” said Kelly Kneaper, who was 12 years old at the time of its opening and is Groseclose’s daughter.

Groseclose shot the lion in Uganda in 1972 while on a monthlong trip to Africa with his wife, Lonnie. After about a year, the taxidermic lion made its way to Anchorage.

“It was quite the conversation piece at the hotel,” Kneaper said. “Over the years, I can’t think of how many thousands and thousands of people have taken a photo with the lion.”

Kneaper grew up in Anchorage surrounded by her father’s big-game taxidermy in a roughly 700-square-foot room above the garage. The room even became a yearly field trip spot for Kneaper’s school classes.

Kneaper recalled the times she and her brother, Brian Groseclose, would climb on the back of her dad’s lion and leopard while playing. “My dad would be like, ‘Get off that!’ ” she said with a chuckle.

After retiring and selling the hotel, Kneaper, Groseclose and Linton’s children — Richard Linton and Dawn Linton-Warren — opted to leave the stuffed lion behind. Hugh Wade, Kneaper’s oldest friend and broker for the hotel, asked if he could have the lion, though he didn’t have a definitive plan for it.

In mid-January, the $1,000 relocation process began, paid for by Wade.

Dennis and Kyle Keeling, of Instant Service Glass Repair, precariously removed panels of glass used as a protective case from around the lion so the movers could bring it downstairs.

On Feb. 16, a team of four from Allen’s Professional Moving Services worked cautiously to haul the more-than-200-pound lion and its mount down two flights of stairs and into the back of a large moving truck.

They used gloves and blankets to protect the aged fur while avoiding the fragile tail, ears, claws and whiskers.

Dan Dunbar, a friend of Wade’s, agreed to store the lion until they can find a permanent home for it.

“Life is short and we’re here to make memories,” Wade said about taking ownership of the lion for the time being and coordinating the move. “It’s been fun, yeah, it was worth it.”

Ryan Schwalbe, who helped oversee the move and works with Wade at Spire Commercial Real Estate, created an email account for the lion to help with this venture. He’s encouraging people to email SpireGoldenLion@gmail.com if they’re interested in offering a space to host the lion or have ideas about a permanent home for the big cat.

“We weren’t overly convicted about where it was going,” he said. “It’s a means of interacting with people, getting out there and hopefully getting some response.”