Histories of Anchorage: The story of the 1953 restaurant workers strike, which shut down almost every eatery in town 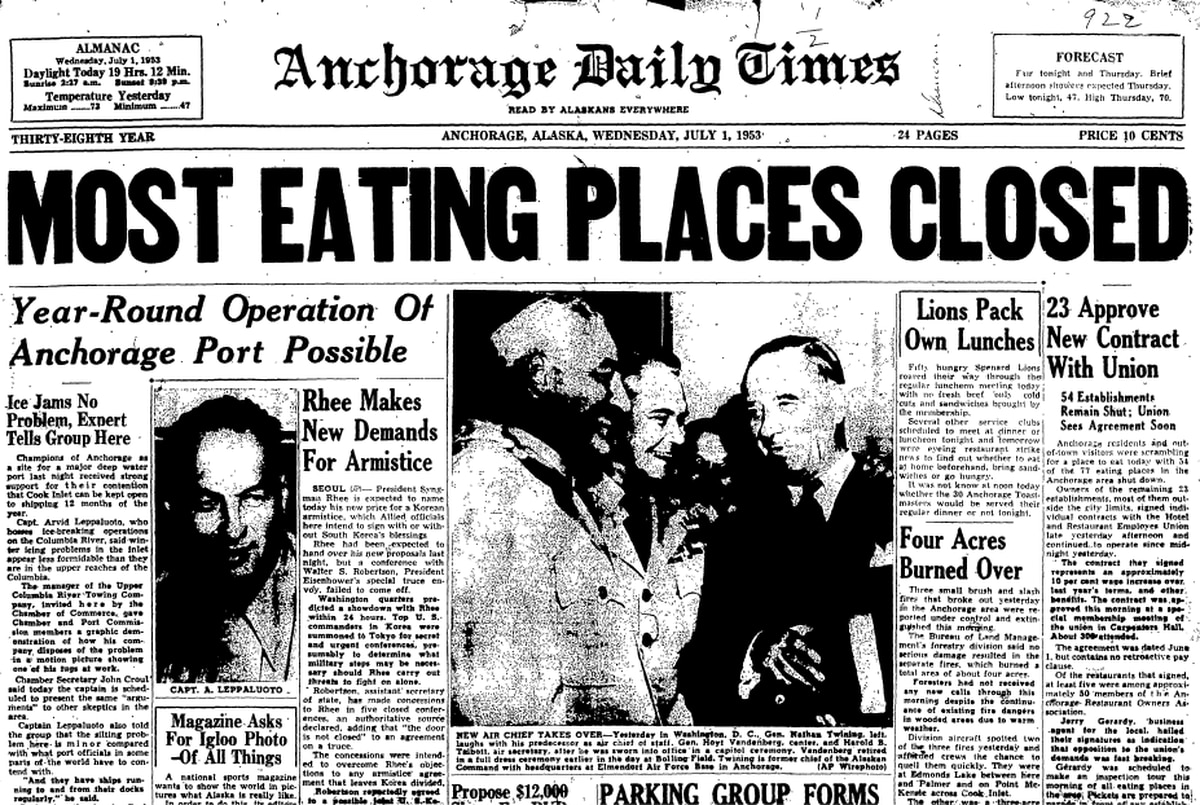 Cover of the July 1, 1953, edition of the Anchorage Daily Times

Cover of the July 1, 1953, edition of the Anchorage Daily Times

This article is dedicated to the restaurant workers, delivery drivers, grocery staff and other service workers who have kept Anchorage fed through the past stressful year.

It was a lovely, warm summer day in Anchorage. The tourists woke up in their motel and hotel beds, dressed and exited their rooms to find breakfast. Instead of bustling cafes, there were only locked doors. Farther and farther, the visitors searched for sustenance until they discovered a few scattered establishments understandably packed. During their walk, they passed suited locals on their way to work, many carrying lunches in brown bags. Just the day before, they had seen numerous open eateries. Now, a strike limited their options. It was July 1, 1953, the day the Anchorage restaurants closed.

Anchorage — and Alaska — has a long history of union solidarity. According to 2020 data from the U.S. Bureau of Labor Statistics, Alaska has the third-highest percentage (19.5%) of union members among its workforce, after Hawaii and New York.

Anchorage also has a long history of labor strife, dating back to its founding as a railroad base. During the late 1910s, railroad leadership reportedly organized a rifle club to intimidate the workers. The Alaska Labor Union Hall, Anchorage’s largest log building at the time, burned to the ground during the night of Oct. 15-16, 1916, almost certainly arson by local anti-union elements. A 1946, restaurant worker strike also closed most of the local eateries.

The first steps toward the 1953 strike came in mid-May that year, when representatives from the restaurant workers union and restaurants met to hash out details on a new contract for the 1953-1954 business year. While negotiations in the previous years were not exactly cordial, they had progressed smoothly enough. The union requested a 20% wage increase and additional holidays. Representatives for the restaurants claimed, “business has been bad” and countered with a 10% wage decrease.

It had been several years since any local industry demanded wage cuts, let alone ones as drastic as those proposed by local restaurants. Anchorage, at this time, was still riding high on a construction and federal spending boom initiated by the installation of Fort Richardson more than a decade earlier. The area population ballooned from just over 4,000 in 1939 to more than 32,000 in 1950. Given shortages of building materials, a common joke at the time was that a resident needed not-for-sale rather than for-sale signs.

The restaurant industry had been one of the major winners in this boom. Many existing eateries expanded their hours. Dozens more opened to meet demand across the rapidly growing city. Locations competed against each other for entertainment imported from the Lower 48. Acts, from musicians to strippers, could earn twice as much in Anchorage in addition to paid travel costs. One Anchorage club owner told Variety in 1952, “The U.S. paid $7,200,000 for the whole Territory of Alaska when they bought it from Russia in 1867. I figure we’re paying that much a year now to get acts up here!” In other words, “bad business” claims did not match the well-known reality of midcentury Anchorage.

Just days after the restaurants offered a wage cut, Alaska’s unionized construction culinary workers successfully negotiated a significant 22.5 cent hourly wage increase. Labor experts assumed this outcome predicted a quick victory for Anchorage restaurant workers. Instead, negotiations between employees and employers dragged on for weeks. The old contract expired May 31, which passed without a deal. Negotiations continued in a good faith attempt to reach common ground.

On June 8, the restaurants offered to approve the same terms as the previous contract. However, a week prior, Ketchikan restaurant workers received a substantial raise. Waitress wages there rose from $2.30 to $3.70 an hour, making them higher paid than their Anchorage counterparts. The counteroffer was rejected, and the workers prepared for the worst.

On June 29, the restaurant workers called for a strike beginning July 1. A union leader told the Anchorage Daily Times, “The union regrets the necessity of taking this action because we believe if an honest effort had been made by the owners negotiating committee we would have arrived at an agreement.” Around 400 workers prepared to meet at Carpenters Hall that morning rather than report to work.

There were 78 eateries — restaurants, clubs, soda fountains, coffee shops and cafes — in Anchorage at the time. At almost the last moment, 24 of these establishments brokered individual deals with the restaurant workers union. Most of these were located outside city limits. When they opened on July 1, they installed signs declaring, “Open for Business, Fair Union House.” Meanwhile, the downtown restaurants were a unified if obstinate block.

Restaurants that could prepared by cutting back orders. The Elks Club provided sandwich materials for patrons to assemble. Some well-informed social clubs, like the Spenard Lions, ate cold cuts and sandwiches from home. Other meetings were canceled outright. Bars agreed not to sell food for the duration of the strike.

The strike came as promised. While workers prepared signs for pickets, no active protests were needed, and the strike proceeded peacefully. Those restaurants that did not agree to terms did not open. The few that did sign new contracts naturally enjoyed heavy traffic and long lines. Some union members wandered around town and helpfully directed hungry tourists towards the open options.

After the strike’s first day, the restaurant side began to crack. Five more eateries signed contracts with the union. All five were located within city limits, including the prestigious Aleutian Gardens.

On the second day of the strike, 49 eateries remained closed. The Fourth of July was a Saturday, and the holiday weekend passed with little change. By July 6, 44 restaurants remained closed. The seventh day of the strike opened with the city’s eateries perfectly split: 39 were open and 39 were closed. The most recent to agree to terms with the union included Anchorage’s newest restaurant, the Jim Dandy Drive-In on Fireweed Lane.

Around noon on July 8, the remaining restaurants agreed to terms. Like most of the already open eateries, they agreed to a 10% wage increase for employees. Those establishments that had been closed began the necessary behind-the-scenes preparation, and by July 9, most were reopened. Unfortunately, business that day was hampered by a blanket of ash from the eruption of Mount Spurr.

The strength of the restaurant workers union waned soon after this victory as the landscape of eating out in America changed forever. Fast food, grocery store delis and junk food altered the availability of a quick meal. In 1953, drive-ins were already beginning to dot local roads, including the Spenard Dairy Queen that opened in 1952. In addition, union membership dropped significantly in the subsequent decades. But, for just over a week in 1953, hunger gave unprepared office workers and tourists a new appreciation for the work of restaurant employees.