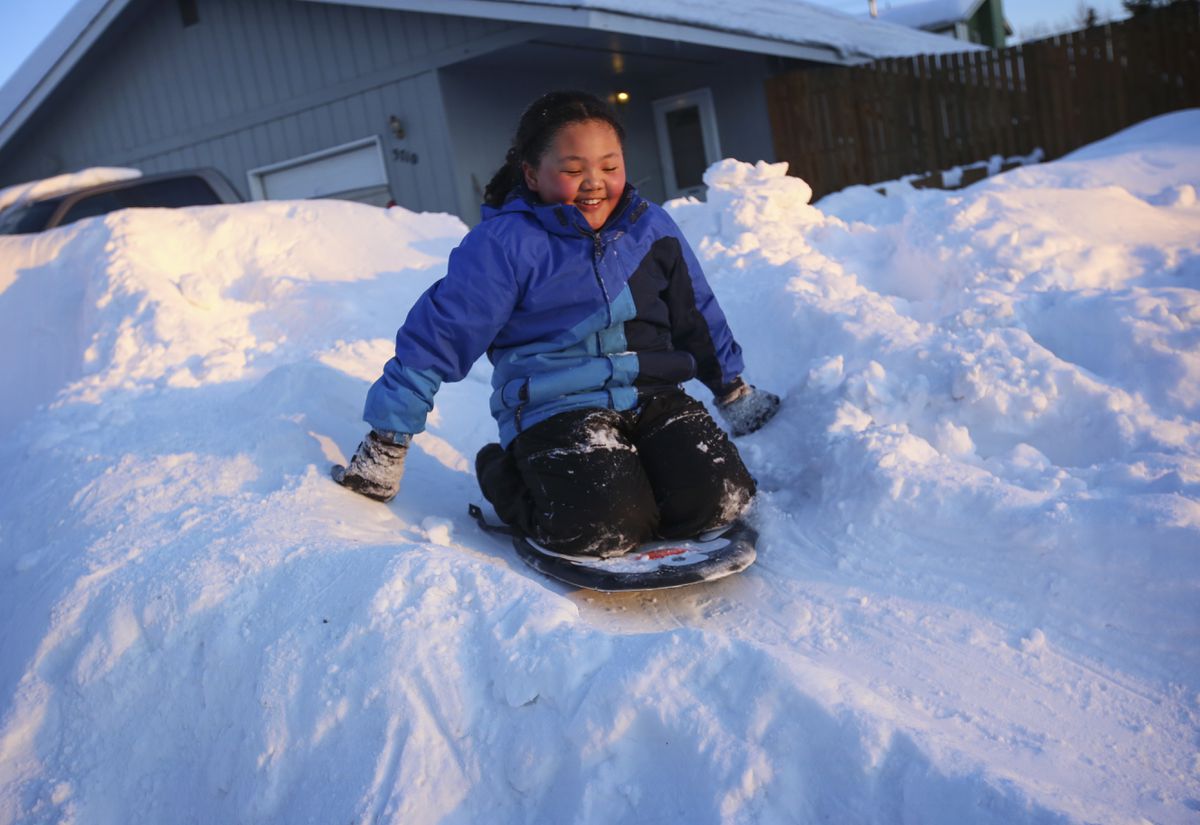 Nadia Green, 9, sleds down "Twisting Tornado", a run on a sledding hill she and her dad, Keenan Green, built outside their home in Anchorage on Friday, March 19, 2021. (Emily Mesner / ADN)

Nadia Green, 9, sleds down "Twisting Tornado", a run on a sledding hill she and her dad, Keenan Green, built outside their home in Anchorage on Friday, March 19, 2021. (Emily Mesner / ADN)

For the past month or so Nadia Green, 9, began creating a quinzee and sledding hill from excess snow she and her dad gathered from their driveway and backyard, using sleds to cart the spring powder.

For days on end, Green would carve out more and more snow from its base at the end of her driveway until there was enough room for her and her dog, Jewels, to sit inside together. She stayed warm inside the snow shelter that became insulated by her body heat as she watched cartoons on her phone one day, she explained.

“‘Okay, this thing is getting serious’,” her father, Keenan Green, said with a smile as he recalled watching her construct the structure.

The idea came from a virtual Cub Scouts meeting she had where they learned about quinzees — a snow shelter made from a hollowed out snow pile. Two of her scout leaders even “survived” two nights in one, she said with awe. Nadia has been in the Scouts for three years and joined during the first year the organization allowed girls to join.

From there, Nadia and her father created a sledding hill on top, complete with snow stairs. The hill features three runs, crosses their East Anchorage neighborhood street and ends at their neighbor’s mailbox.

With run names such as Twirly Whirly and Twisting Tornado, this sledding hill gives popular spots around Anchorage a run for their money.

“I would say the biggest challenge ... the snow plowers, (they) kept taking out the bottom of the hill,” she said.

Last week, the pair soaked in fading rays of the setting March sun as they took turns whizzing down the tracks on their sleds. They went on their stomachs, then their backs and eventually on their knees — imitating surfing. Nadia belly-laughed as she watched her dad bail from his sled to avoid bumping into the wooden mailbox post across the street. They dusted off the snow and walked back to the hill, repeating the scene over and over as their laughs broke the quiet spring night.

Every day, Nadia cleans off the runs by sledding down each run three times so her parents can have a fast and smooth ride, she explained. She’s also become an instructor and taught her mom and dad how to surf on the snow.

“I’m actually so surprised how much time they spend out here,” Green said laughing about his daughter and her mom.

Her biggest advice to other kids who want to create an at-home snow park?

“I would say to just have fun,” she said, smiling.