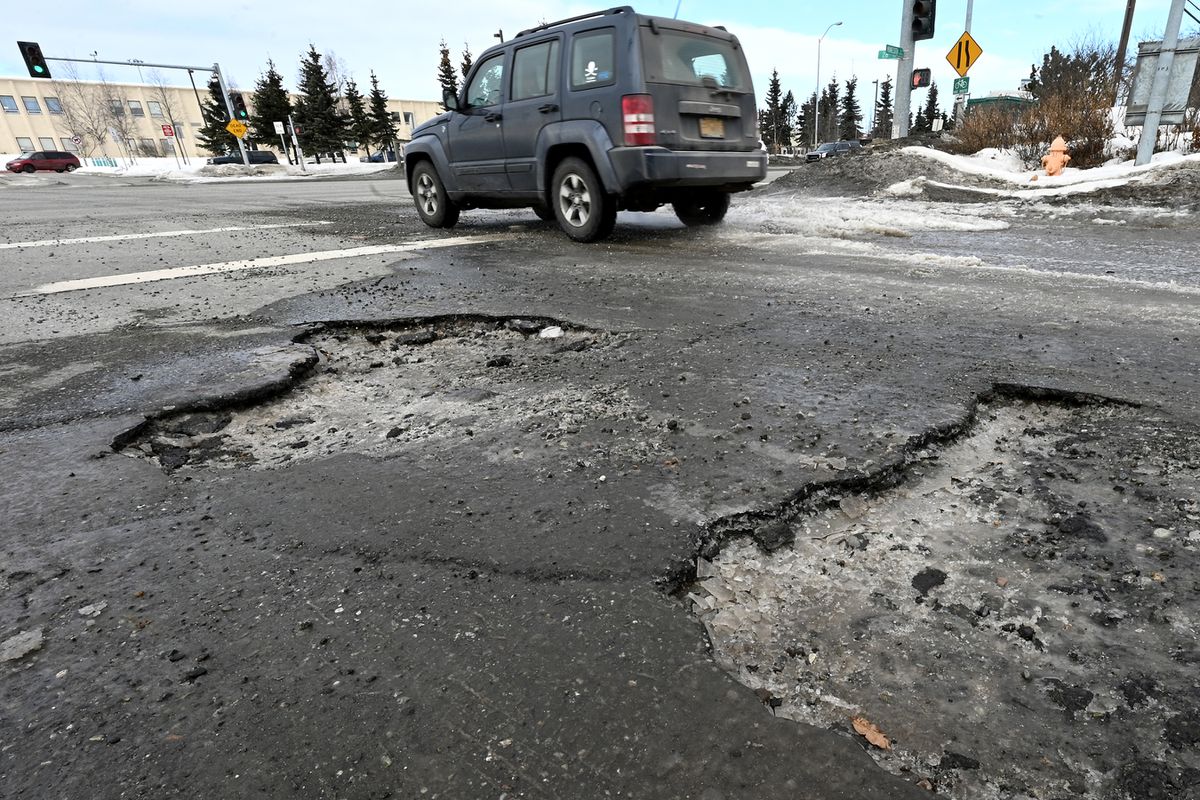 Large potholes at 26th Avenue and Minnesota Drive were getting filled by a pothole crew on Thursday, April 1, 2021. (Bill Roth / ADN)

Large potholes at 26th Avenue and Minnesota Drive were getting filled by a pothole crew on Thursday, April 1, 2021. (Bill Roth / ADN)

Jesse Jordan’s week got off to a bumpy start.

After he took a detour down Boniface Parkway on Tuesday, a pothole popped two tires on his Honda Accord. Then a day later, it happened again — only this time, it involved his girlfriend’s car as he was driving her to work.

“I guess I have bad luck with potholes,” Jordan said.

Breakup season is just getting started, said Paul VanLandingham, maintenance manager for the ‎Municipality of Anchorage.

“It’s that time of year, unfortunately, but I think the worst is still to come,” VanLandingham said.

Still, he said, the situation seems on par compared to years past. Since Jan. 1, the municipality has filled 328 potholes, 258 of them since March 1.

But Shannon McCarthy with the Alaska Department of Transportation and Public Facilities said from her agency’s perspective, this season is comparatively bad. She expects figures for 2021 to be up “by quite a bit.”

“We’ve used twice the amount of hot mix that we do on any average year,” McCarthy said.

Ian Shallo, office supervisor at Alaska Tire Service, has seen an increase over the last week in pothole-related vehicle repairs. Some customers come in with one popped tire, others with two.

“There’s a really bad one we’ve seen a lot of customers from in front of City Diner, on Minnesota there,” Shallo said Thursday. “I had six or seven customers just yesterday that found that pothole.”

Jenna Schnuer drove through that very pothole Tuesday night when she switched into the right lane and heard a “kerchunk.”

When she pulled over on 32nd Avenue, she saw another three or four vehicles taken out by the same divot, she said. One of her tires was flat. The pothole broke her tire’s sidewall.

“It was annoying, but kind of funny at the same time, and it felt very Anchorage,” Schnuer said. “Everyone was helping each other. People were trying to change each other’s tires. It was very nice, in a weird way.”

She left her car and walked her dog home while she waited for a tow truck from Vulcan Towing to come.

[Alaska gardeners might feel the urge to prune right now. Resist it.]

A Vulcan Towing employee confirmed they towed several cars from the area due to the pothole, saying there were around 10 cars pulled off 32nd Avenue when tow trucks arrived.

“It’s just part of the price of driving here during breakup,” Schnuer said.

According to a city spokeswoman, the offending pothole has since been filled.

The state transportation department has five preservation jobs happening this summer to repave sections of road throughout the state — one of which is the Minnesota stretch that took out Schnuer’s car.

“You can’t really get a good seal adherent to the existing asphalt when it’s cold and wet like this,” McCarthy said. “We’re doing the best we can getting the hot mix out there and trying to get a good seal.”

According to VanLandingham, maintenance manager for the ‎city, all it takes for a pothole to form is a chip in the asphalt, which can let water seep in. The water — in combination with cars driving over the same area — compresses the pavement.

“The structure underneath the road is basically being eliminated,” VanLandingham said. “Eventually, there’s nothing left to hold the asphalt in place. Asphalt breaks and you now have a pothole.”

Jordan, the Anchorage resident who had two incidents with potholes, had to pay $136 to patch up his Honda’s tires. He said he thinks there should be some type of reimbursement for damage, either from the municipality or the state.

“It’s not on us, the driver,” Jordan said. “We’re just driving and trying to avoid them, but you can’t avoid them all. ... What if my whole rim broke off or something?”

According to Katie Scovic, communications director for the municipality, residents can file a claim with Anchorage’s Risk Management team for pothole damage and may be eligible for payment, but only if the city was previously notified of the area, had reasonable time to repair it and didn’t. Most claims do not make it past the first stage in the process, she said.