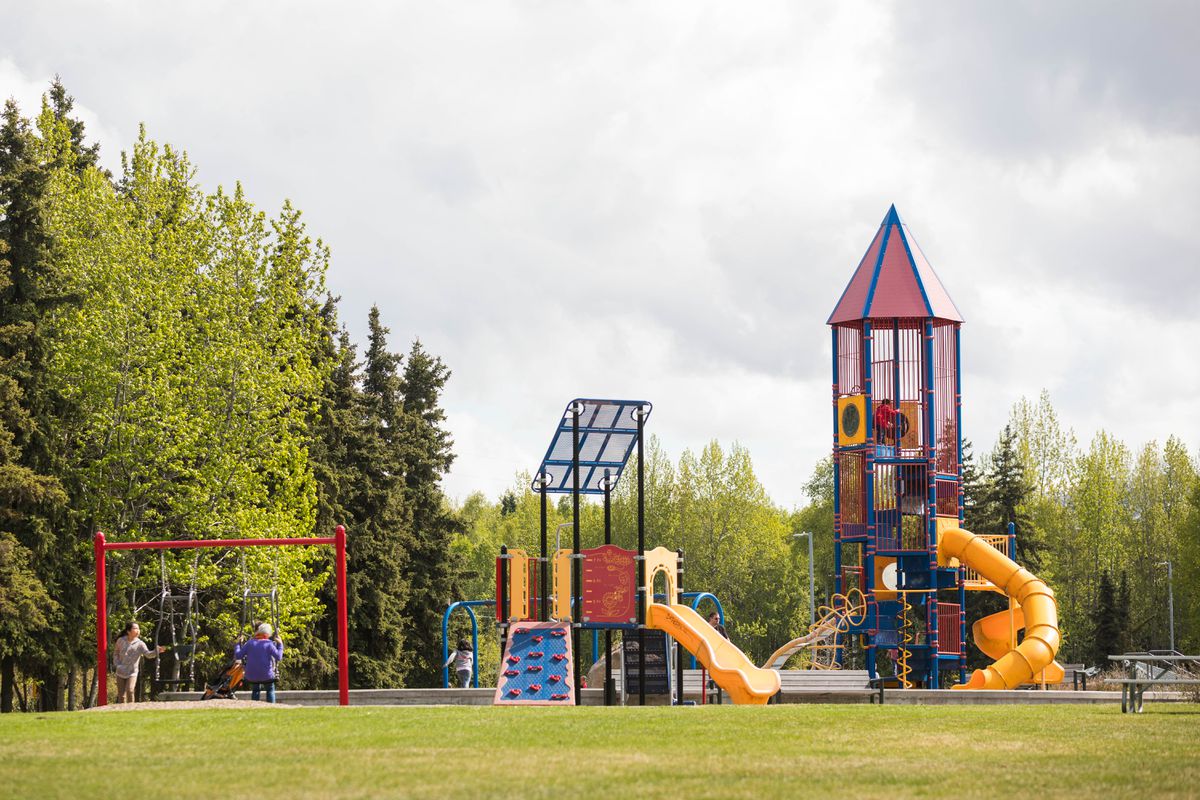 Playground equipment at Valley of the Moon Park Thursday, May 24, 2018. (Loren Holmes / ADN)

Playground equipment at Valley of the Moon Park Thursday, May 24, 2018. (Loren Holmes / ADN)

Given the multitude of Anchorage parks, it is not surprising that some details regarding their naming origins have been lost to history. At least one local park name is misspelled. Other park names have long-forgotten origins. Yet, no Anchorage park name is as misunderstood as Valley of the Moon. The park itself has a rambling history connecting Anchorage’s original Dena’ina Athabascan inhabitants, prostitutes, a famous author and his alleged daughter.

Valley of the Moon is a nearly 22-acre park primarily consisting of the north side of Chester Creek along West 17th Avenue west of C Street. The “Chester” in Chester Creek is a mangled version of the Dena’ina place name, Chanshtnu, meaning Grass Creek. There is no surviving Dena’ina term specifically for Valley of the Moon. From the 1910s into the 1940s, several Dena’ina individuals and families had cabins along the Lower Chester Creek until homesteaders and urban development pushed them out.

When Anchorage was established in 1915, an already assembled throng of prostitutes was forbidden from purchasing townsite lots or working within city limits. Leadership from the Alaska Engineering Commission, empowered to build and operate the Alaska Railroad, encouraged the sex workers to settle directly south of town on the Park Strip’s far side. That arrangement lasted for about a year until the women were summarily evicted by the Forest Service in July 1916.

After a couple of months with diminished companionship options, the city fathers were apparently lonely. According to an assistant district forester, the prostitutes were encouraged to resettle directly south of the original red-light district “in a low land near Chester Creek.” This description places the new district in the vicinity of what is now Valley of the Moon Park. The women built rows of two- to three-bedroom structures that were both homes and brothels. In a couple of years, they relocated their operations closer to downtown.

The most significant development in the area after the creation of a red-light district but before the park came with the March 1953 opening of a private swimming pool. The Spa was located immediately north of and overlooking the park. A generation of Anchorageites learned to swim there before the completion of the far cheaper West High pool in 1972 and the Spa’s closure circa 1977.

Development for the park began with a smaller land purchase by the City of Anchorage in 1955. Additional land purchases followed in the early 1960s, part of an urban renewal project that led to the creation of the Westchester Lagoon and Chester Creek greenbelt. To access the park, Arctic Boulevard was connected to E Street via West 17th Avenue. As far back as 1952, Anchorage area residents tired of traffic congestion on Spenard Road petitioned for an Arctic Boulevard extension. Original plans called for no curve, for Arctic to link with H Street directly to the north.

Park development began in the late 1960s and was completed by 1972. The park has always been named Valley of the Moon, but locals immediately lost track of what the name originally meant. The park happened to be created during the height of the space race. The Soviet Union launched the first satellite, Sputnik, in 1957. In 1962, President John F. Kennedy declared, “We choose to go to the moon in this decade and do the other things, not because they are easy, but because they are hard.” In 1965, the Soviet cosmonaut Aleksei Leonov made the first spacewalk. The Apollo 8 mission orbited the moon in 1968. And in 1969, Apollo 11 landed on its surface.

With “moon” already in the park name, the association with outer space came naturally. In the park’s earliest form, the city installed rocket swings, a rocket-shaped jungle gym, and other space-themed equipment. That theme has survived to this day, including the current rocket-shaped jungle gym installed in 1998. For obvious reasons, the common nickname for the area is “rocketship park.”

However, the original meaning of the name had nothing to do with space or rockets. Valley of the Moon is another name for California’s Sonoma Valley, part of Wine Country. Jack London is best known for his adventure tales set in the Far North, novels like “Call of the Wild” and “White Fang.” But In 1913, Jack London published the novel “The Valley of the Moon,” something of a love letter to the Sonoma area and his second wife. A movie version followed the next year.

The park is named for either the actual valley or the novel, though it is unclear which. The most probable origin is an unnamed city employee with an appreciation for the entirety of London’s oeuvre.

In August 1918, the Anchorage Daily Times noted that the city library had added a copy of “The Valley of the Moon.” This bit of information establishes the book’s presence in Anchorage but is also illustrative of a time when additions to the library were newsworthy events. Before the opening of the original downtown Loussac Library in 1955, the Anchorage library was an underfunded small room in City Hall.

Rae Arno’s 2008 “Anchorage Place Names” book claims the park was “named for Jack London’s home in the Sonoma Valley in California.” This is not accurate. Jack London’s home was Beauty Ranch, now part of the Jack London State Historic Park, about 20 miles north of Sonoma.

Jack London never visited Anchorage, but longtime colorful resident Sybil London Bates (1894-1980) claimed to be his unacknowledged daughter. Her mother and Jack were both young. The future author would have been only 18. Sybil was born in San Francisco, so small she fit inside a shoebox.

While there is no evidence that Jack is her father, he did have a well-earned reputation as a womanizer. Sybil also claimed that Jack bought a home for her mother in Sacramento, but Sacramento is far from Jack’s then-base in Oakland. Sybil claimed that supporting paperwork was lost over the years, either in the 1906 San Francisco Earthquake or during travel to Alaska.

The Duchess, as her Anchorage friends called her, was a flamboyant character drawn to the spotlight. At 16, she ran away from home to fulfill a dream of becoming a dance hall girl. Her mother blocked that career, but Sybil later spent 12 years in vaudeville with a mind-reading act.

Her husband was in the U.S. Army Corps of Engineers, which brought them to Alaska in the early 1950s, where she lived the rest of her life. She performed at several Fur Rondys and often guided visitors at the Anchorage Museum. In 1964, she visited Dawson City and her father’s old cabin, absconding with a rusty lantern she claimed was the same one from London’s classic short story, “To Build a Fire.” This lantern became a prop for her performances.

Jack London’s connections to Anchorage may be tenuous, but the Valley of the Moon Park has become a beloved destination for nearby residents and those passing by on the Chester Creek Trail. “The Valley of the Moon” can be read free and legally at Project Gutenberg.

Arno, Rae. Anchorage Place Names: The Who and Why of Streets, Parks and Places. Anchorage: Todd Communications, 2008.