Nome’s correctional center asked an Alaska author to donate a few books. Now others are pitching in to send boxloads of them. 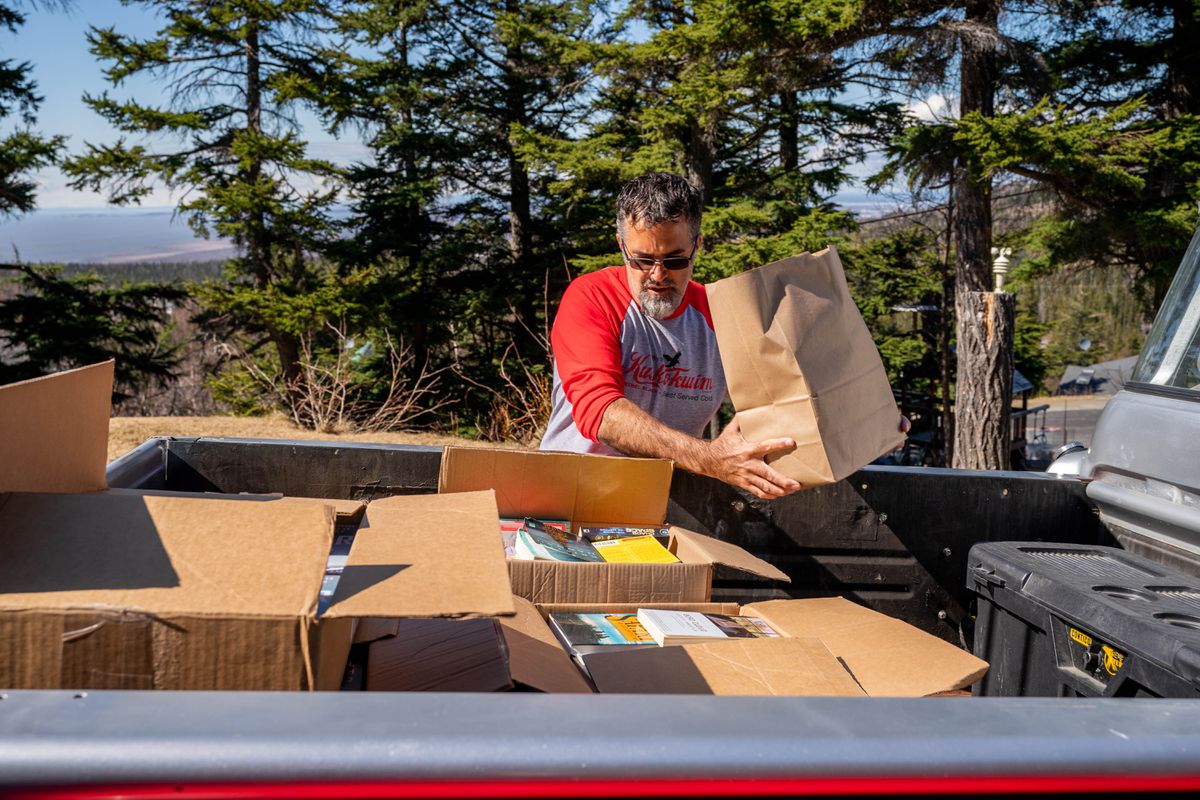 Don Rearden loads donated books into a truck at his home on Friday, May 7, 2021 in Bear Valley. The books will be sent to Anvil Mountain Correctional Facility in Nome. (Loren Holmes / ADN)

Don Rearden loads donated books into a truck at his home on Friday, May 7, 2021 in Bear Valley. The books will be sent to Anvil Mountain Correctional Facility in Nome. (Loren Holmes / ADN)

It all started when Alaska author Don Rearden received an email from the education coordinator at Anvil Mountain Correctional Center in Nome, requesting he donate copies of his book “The Raven’s Gift.”

Now, after Rearden put out a request on social media, boxloads of books are getting flown up to the correctional center, the result of an outpouring of support from local bookstores, local authors and an Alaska air carrier.

Rearden said the email from the correctional center detailed how a number of the books there were in bad shape, with some held together by deodorant labels and stickers pulled off apples. The email asked for Alaska-specific books and those written by Indigenous people.

Betsy Holley, public information officer for the Department of Corrections, said in an email that the library has approximately 3,000 books that get “plenty of use” and that over time, they “show wear and may be ‘patched’ by a reader.”

Rearden said he gets requests to donate books every now and then, but he replied saying he could do them one better, and began working to send Anvil Mountain a new collection of books.

In addition to sending copies of “The Raven’s Gift,” he had several cases of “Never Quit,” a book he co-authored with Jimmy Settle, that he could donate.

Then “I made one post on Facebook and I wasn’t quite ready for the response,” Rearden said.

Since his initial social media post, Rearden said, he’s received a truckload of donations from Title Wave Books in Anchorage.

The Writer’s Block Bookstore & Cafe also reached out and offered to collect books at its Spenard storefront through Friday.

Other Alaska authors he knows, such as Vivian Faith Prescott and Dan Bigley, have dropped off books at The Writer’s Block or are planning to mail copies to Nome, Rearden said.

He also connected with Ryan Air, which agreed to fly the books to Nome for free.

The Anvil Mountain Correctional Center now houses 144 incarcerated people, according to Holley, and 138 are Alaska Native. The facility’s capacity maxes out at 128. There are individuals at the facility who are awaiting trial.

“Due to COVID-19, book donations were suspended but with recent changes, can once again be accepted,” Holley with the Department of Corrections said, adding that “COVID-19 has increased the need for more books.”

Rearden said he’s been struck by the response to his effort.

“The enthusiasm was really neat,” Rearden said. “It’s just how cool Anchorage is, and people from all over — the Alaskans that live Outside — are just going to start sending some books from their personal libraries straight to Nome.”