Histories of Anchorage: The mystery of Amodt’s table, origin of the city’s flag and other answers to reader questions 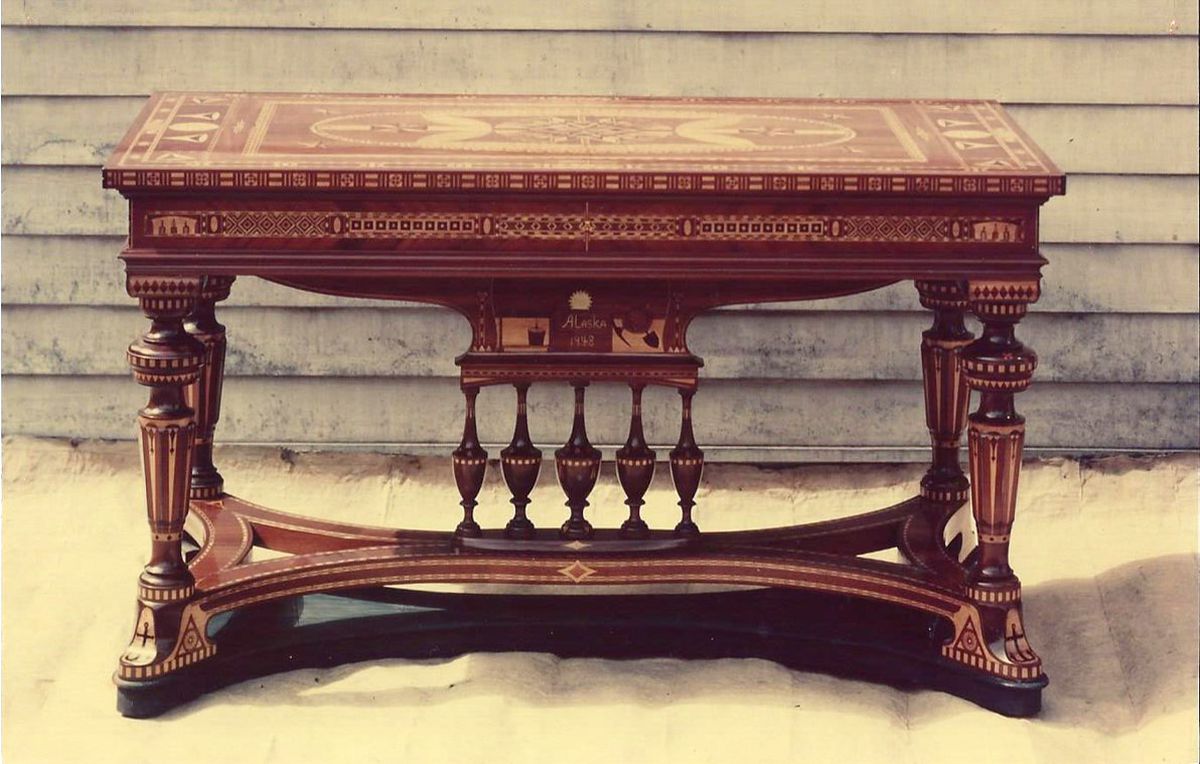 An important part of this series is the interaction with Alaskans, and I have answered well over 1,000 reader-submitted history questions in the past year. The questions have ranged from the personal to the global, from family histories to pandemics. A couple of clever students even asked for help with assignments. The following were some of the questions that stood out.

Q: What’s the origin of the Municipality of Anchorage flag?

A: The Anchorage flag is the result of a contest. In late 1972, the City of Anchorage commissioned the competition overseen by the city’s Historical and Fine Arts Commission. There were essentially no rules, no restrictions on design elements, including color or shape. The only hint for contestants came from the commission chair, Mary Louise Rasmuson, who noted that entries would be primarily judged on a conceptual basis, on the nature of the ideas presented.

In keeping with that limited guidance, the commission selected Joan Kimura’s entry for its emphasis on Anchorage as a transportation hub. Kimura, an established painter and longtime teacher at the Anchorage Community College and later at the University of Alaska Anchorage, presented her entry as an acrylic painting. The yellow background, anchor, plane, sun and ship are largely unaltered from that submission, and the design at the center was also adopted as the city seal in 1975. For her efforts, Kimura received a plaque and $1,000, about $6,500 in 2021 dollars.

There were more than 300 entries, and Pam Greer, a West Anchorage High School student, was the runner-up. The flag was first raised over city hall on June 14, 1973.

Benny Benson, who designed the Alaska flag, died on June 2, 1972. From the timing, it is possible that his passing inspired the desire to create an Anchorage flag.

Nearly 50 years later, opinions on the design are more muted. In 2018, vexillologist — one who studies flag design — Ted Kaye told Alaska Public Media, “I like to say that in every bad flag design, there’s a good flag design trying to get out. Anchorage’s flag is no exception. It has great imagery, an anchor for Anchorage is just super. But writing the words Anchorage, Alaska on the flag, in a sense, shows that Anchorage is insecure about its symbolism.”

Still, in a 2004 survey of American city flags, the North American Vexillological Association ranked the Anchorage flag design as the 24th best out of 150. Juneau’s flag, which absolutely does not look as if it was made with Microsoft Paint, was ranked 134th.

Q: What is up with that Café 817 tile building, the one with the beautiful tile work (interior and exterior) downtown on Sixth Avenue between H & I St?

A: Cafe 817, also known as the Muffin Man, is located within a standout structure at 817 W. Sixth Avenue. According to municipal data, the building was constructed in 1947. Its original and longest-tenured tenant, Alaska Art Tile, is the cause of the tiled exterior. Per one of their advertisements, Alaska Art Tile was a distributor of “an unlimited variety of colors, and styles of ceramic tiles for your kitchens, baths, fireplaces and entry ways.” The tiled exterior was a clever way to advertise their wares. They closed in the late 1980s after a roughly 40-year run.

Q: What can you tell me about the Crossroads Lounge? There are a lot of stories about this building and how it was moved after the “big quake,” but there’s definitely confusion as to where it was originally and when it was moved.

A: Damon Polk opened the original Crossroads Lounge downtown at 125 W. Fourth Avenue in 1952. The managing ownership changed several times over the next decade, including a stint under James “Jimmie” Sumpter, the notorious owner of several local bars and strip clubs. In June 1964, after the Great Alaska Earthquake, the owners relocated the business to its current site, 1042 Gambell Street. The previous tenant of the Gambell Street building was the Alaska Accredited Beauty College. The Baranof Lounge, also known as Barry’s Baranof, opened a few months later that year a little north of the Crossroads.

Q: I have two questions about Anchorage/Eagle River History: 1. What was the name of the ice cream parlor that used to be located on Northern Lights and C Street, where Kentucky Fried Chicken is now? 2. Did they ever open the time capsule at Chugiak High School that was buried in 1976?

A: That ice cream parlor was Alaskaland, with its western theme and giant Mount McKinley banana split. The time capsule was originally buried during construction of the courtyard. According to a 2014 Chugiak-Eagle River Star article, the capsule is now the “focal point of the courtyard design.” As originally intended, it will not to be opened until 2026.

Q: Who are the Boney and Nesbett Courthouses in downtown Anchorage named after?

The Boney Courthouse, originally the Boney Memorial Court Building, is named after George F. Boney (1930-1972), the second Chief Justice of the Alaska Supreme Court. On Aug. 30, 1972, Boney drowned on a windy day at Cheri Lake after his sailboat capsized. The courthouse that now bears his name was already under construction, so the idea for the memorial came easily. The Alaska Supreme Court held their first session at the Boney Courthouse on Nov. 13, 1973.

The Nesbett Courthouse is named for Buell A. Nesbett (1910-1993), the first Chief Justice of the Alaska Supreme Court and the man who introduced chinchilla breeding to Alaska. The Nesbett Courthouse opened on May 20, 1996. The exterior is covered with 35,000 square feet of granite panels.

Q: Who was the first Alaskan drafted by a Major League Baseball (MLB) team?

A: In 1971, the Philadelphia Phillies drafted pitcher Jerome Johnson out of Fairbanks’ Ben Eielson High School, making him the first MLB-drafted Alaskan. He did not reach the majors but played in the minor leagues from 1971 to 1975 and 1978.

[Related: This baseball season might be canceled, but Alaska’s history with the game goes way back]

Q: What happened to the Amodt table?

A: Descendants of Anchorage master craftsman Andrew Amodt, also spelled Aamodt, are trying to track down his long-lost masterpiece, a one-of-a-kind table. The Norwegian Amodt (1875-1957) moved to the U.S. in 1901 and made his way to Valdez in 1904. From there, he walked to Fairbanks. By the late 1910s, at the latest, he was in Anchorage, where he lived for the rest of his life.

His 1957 Anchorage Daily Times obituary described the table as his prized possession, a “beautiful inlaid table made of seasoned mahogany from old railroad cards, inset with hundreds of kinds of woods.” It reportedly took 16 years to craft. He reportedly intended to donate the table to the University of Alaska. However, he did not leave a will, and his estate was auctioned off to the highest bidder. Former prostitute-turned-madame-turned-real estate mogul Zula Swanson bought the table for $758, about $7,000 in 2021 dollars. Swanson had known Amodt since 1929 when she first moved to Anchorage. She said, “I wanted the table because I saw him building it. I watched it and watched it grow.”

Swanson died in 1973, and her Goose Lake home burned to the ground in 1977. Anchorage Fire Department spokesman Jack Steele noted that the devastation included her significant art collection. “It’s hard to put a price on some of the things that were lost,” said Steele. The table was likely, though not definitively, lost in the blaze.

The search for either the table or some measure of closure has lasted decades without success, but someone out there in Alaska likely knows more about the ultimate fate of the Amodt table. If you have any information on the table, please contact Bob Carlson (rccarlson@gci.net).