Houseplants are booming in popularity among Alaskans, with no slowdown in sight 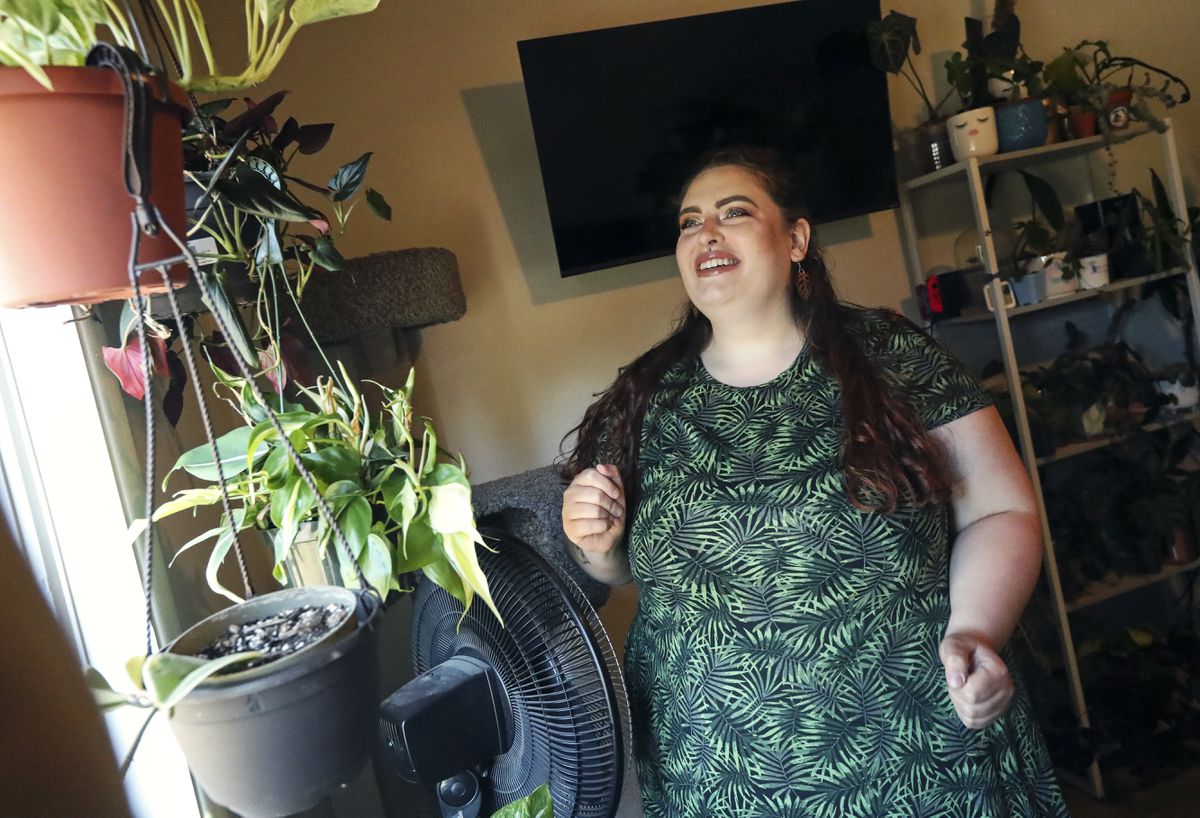 Sky O'Neal stands with a portion of her nearly 200 plants that are located throughout her home in Anchorage on Wednesday, May 26, 2021. O'Neal helped start the Facebook group, Alaska Haus of Plants which provides a platform for people to trade plants and cuttings and get plant advice. (Emily Mesner / ADN)

Sky O'Neal stands with a portion of her nearly 200 plants that are located throughout her home in Anchorage on Wednesday, May 26, 2021. O'Neal helped start the Facebook group, Alaska Haus of Plants which provides a platform for people to trade plants and cuttings and get plant advice. (Emily Mesner / ADN)

Anchorage resident Sky O’Neal’s ever-growing plant collection in her east side apartment resembles that of a personal jungle.

“It’s probably closer to 200 (plants), including my cuttings and everything,” O’Neal said. “I haven’t counted in a while.”

The 26-year-old isn’t the only one. Alaskans across the state have shown a heightened interest in indoor greenery, with more becoming plant parents or expanding their collection.

Sarah Lanners, sales and design manager at Green Connection, a landscaping company and garden center in Anchorage, said the pandemic affected commercial accounts — but the influx of plant buyers helped offset the loss.

“We keep saying, ‘Who would have thought we would have been all right through this because of houseplant sales?’ ” Lanners said.

She said hoyas are hard to keep in stock. Aglaonemas trickle in here and there.

Aglaonemas “really baffle me. They’re just gone,” Lanners said. “They’re super generic, as generic as you get. I used to hate them. They bored me to death, and now I’d be happy to see them.”

“All sorts of plant owners” come into the greenhouse, both first-timers and those with experience.

“I don’t see the trend going away anytime soon, even with people going back to the offices,” Lanners said. “These are things people love. They aren’t just going to forget about them.”

‘That’s when my obsession took over’

In O’Neal’s apartment, her plant collection is robust, consisting of mostly rarer specimens such as pink princess philodendrons, anthurium clarinerviums and hoya polyneuras. In her kitchen, reused clear plastic containers are filled with rare seeds and cuttings. She even has an Instagram page for her flora.

She bought her first houseplant around five years ago: a marble queen pothos.

It wasn’t until later, after watching a video of YouTuber Jenna Marbles and her plant collection, that O’Neal’s passion was reignited.

“I was like, ‘Maybe I need to get back into plants,’ and it’s gotten crazy,” O’Neal said.

Then O’Neal discovered Facebook plant purge pages, where people can buy or trade under a post’s comments. It’s where the majority of her plants come from.

“That’s when my obsession took over,” she said.

O’Neal is one of six moderators for Alaska Haus of Plants, a Facebook group with over 1,000 members — many are new plant owners. She and Fay Delana created the group in 2020 as a space to trade clippings and house plant knowledge.

In the online community they helped build, Alaskans bounce plant care and tips off one another. Some already owned plants and grew interested in trading, like O’Neal.

“I wasn’t able to see a lot of my friends because we were all paranoid about getting sick, so having people to talk to on a public forum like that made a huge difference,” O’Neal said. “There are lots of people that I talk to every day because we’re so close now.”

While Morgan Johnson was a student at the University of Alaska Southeast, she would sell plants to make rent.

“I would take clippings ... from huge plants and take cuttings from them and put them in containers and sell them” at Devil’s Club Brewing Co., Johnson said.

She graduated in fall 2019 and had internship plans for the spring, but then COVID-19 happened. So, Johnson pivoted.

After selling plants at the local brewery and seeing success with a pop-up shop, she officially opened The Plant Studio in May 2020 in downtown Juneau. The store sells an array of plants, from lemon trees and snake plants to accessories like macrame hangers and gigantic planter pots.

Did someone say they were looking for big pots?! Come check out the newest pot shop on the block! (All pots have drainage holes!)

“I’ve had so much community support, it’s really incredible — not only community but the plant community,” Johnson said.

She said both first-time plant parents and people with decades of experience come into the shop.

“I help them to get their first plant, and then like a month later, they want to get another one because they keep that plant alive,” Johnson said. “That’s been really fun.”

She said she’s had her challenges, too. Supply chain issues have extremely delayed some orders. For example, pots that she ordered last July arrived in April.

Still, she said she loves helping people find the right flora for their space.

“Not everybody needs to have an entire jungle,” Johnson said.

Some Anchorage plant shops are seeing such an influx of business that they can open new storefronts. That Feeling Co. will have another location at the K Street Market — a soon-to-be indoor market in downtown Anchorage.

The cafe and plant shop’s flagship store on East Dowling Road, which opened in January 2020, will remain open. Both locations are the exact same size: 1,000 square feet.

[Alaska’s growing season is getting longer. Why not try for a second crop this year?]

Tanya Baldiviez owns That Feeling Co. with her husband, Carson. She said their growers are having a hard time keeping up with demand.

“Standard sort of plants have definitely been a challenge. ... With the pandemic, the plants community grew exponentially because people really found a lot of peace in having plants in their home or in their home office,” Baldiviez said.

Around half of That Feeling Co.’s daily customers are new to plants, so Baldiviez makes sure to send everyone home with a care card with proper instructions.