For some of Cordova’s Indigenous artists, creating fish skin earrings is about family, culture and connection 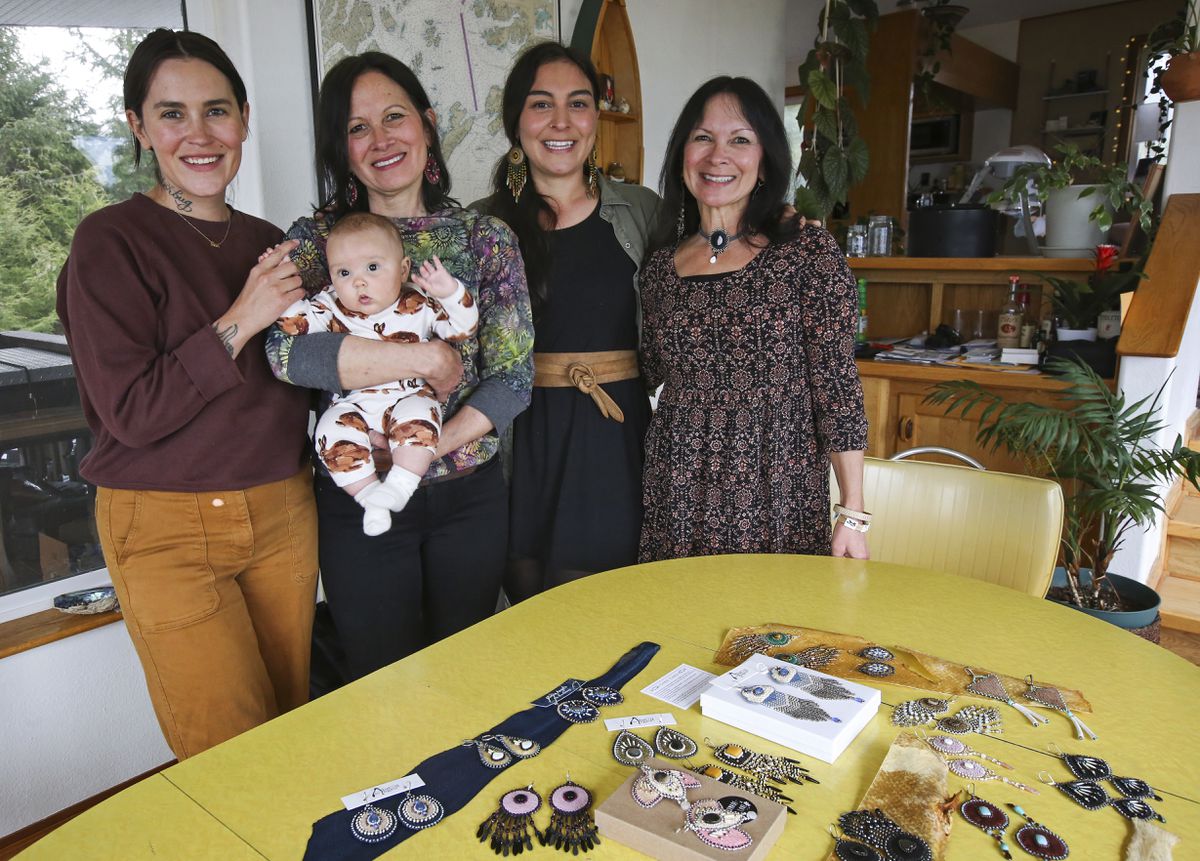 From left, Christine Babic, Mary Babic (holding Ariel Adams), Brittany Banks and Peggy McDaniel stand around a table with pairs of their fish skin earrings in Cordova on Wednesday, May 19, 2021. (Emily Mesner / ADN)

From left, Christine Babic, Mary Babic (holding Ariel Adams), Brittany Banks and Peggy McDaniel stand around a table with pairs of their fish skin earrings in Cordova on Wednesday, May 19, 2021. (Emily Mesner / ADN)

CORDOVA — Salmon are often recognized by their bright orange flesh and flashy silver skin. When tanned and made into earrings, however, the salmon skin takes on a new life — it has the feel of leather but a more delicate appearance, encircled in a frame of tiny, colorful beads.

The market for salmon skin earrings continues to grow, especially on Instagram. Over the past few years, Indigenous creators have used the popular social media platform to share their art and culture with people around the world.

For the women of Alutiiq Angels, a Cordova-based family business that sells hand-crafted fish skin earrings, going online meant they could continue making art, raise their families and reach a broader following.

Mary Babic and her sister, Peggy McDaniel, spent the last 20 years traveling to markets and conventions selling earrings and items made from fur. They learned how to tan fish skin from Frances Samuelson, who owned a bead shop in town, and began incorporating that into their earrings.

In August 2018, along with their daughters, Brittany Banks and Christine Babic, they created the Instagram page Alutiiq Angels.

On the eve of Cordova’s second commercial salmon opener, the women behind Alutiiq Angels gathered around a bright yellow table at Christine Babic’s home. They reflected on how their business, and their community, has evolved.

“I taught at the high school … when I started, there was nothing even saying Alaska Natives live here,” Mary Babic said. “Over the last 15 years, I’ve noticed a difference in the way it is and how people are wanting to learn about Native culture.”

Now, classes ranging from canoe building to fish skin tanning have been offered at Cordova’s Ilanka Cultural Center, a place that honors the heritage and culture of the Eyak, Sugpiat, Tlingit and Ahtna peoples.

During the pandemic, Mary and Christine Babic even took an online fish tanning class hosted by Janey Chang, a first-generation Chinese-Canadian artist and outdoor experiential educator and guide.

Incorporating salmon and halibut skin, some dating back 20 years, the earrings also feature fine beadwork — taught to the women by their mothers — and are often adorned with porcupine quills and a decorative stone.

“For me, it’s such an exciting material because there’s an Indigenous connection,” Christine Babic said. “Like culturally, salmon is so important, but also … we sustain ourselves from fish, even if you’re not Indigenous, so everybody kinda has a connection to the material.”

Since its origin three years ago, Alutiiq Angels’ Instagram account has gained nearly 7,000 followers. Due to high demand, and in an effort to increase fairness, they have implemented a lottery system for purchases of their earrings.

Did they expect this kind of response?

“No,” the women replied, nearly in unison. They had no idea it would take off.

“It was organic. We never had a plan to do this,” Christine Babic said.

“There was so much encouragement from our peers that really made a huge difference in how we were able to sell and spread our kind of style,” she said of other online Indigenous creators. “You just kind of become collectors of each other’s work.”

At its core, Alutiiq Angels remains about the family and the resource.

When their children were younger, Mary Babic and McDaniel brought them to culture camps at Tatitlek, a coastal village south of Valdez.

“To be able to teach them their culture, you could see how ... they loved it, and we loved sharing it,” McDaniel said. “It makes you proud.”

Proud “of where we come from,” Mary Babic added.

Banks joked that they’ll have to start making clip-on earrings for the grandkids, often jokingly called “angels in training.”

A flurry of laughter spilled around the table, covered in brightly colored earrings.

Christine Babic bounced her 4-month-old daughter, Ariel Adams, as she spoke. “It’s about family, really, and then all the other stuff ... comes second,” she said.

Just down the gravel street, Kanisha Lohse also makes fish skin earrings with her family through her business and Instagram page, Mountain Blossom Ridge, which she started last April.

Lohse also attended the culture camps in Tatitlek and learned how to bead from Mary Babic and McDaniel when she was younger. Now, she’s teaching her children from a makeshift studio in her bedroom.

When her husband and fisherman, Tyee, gave her tanned salmon skin, she started making earrings and couldn’t stop. Soon, they started to add up and she had about 30 pairs.

“I like to sit with them for a while and just like absorb their beauty and then ... take pictures with them,” Lohse said. “And as long as I have that picture, I know that I will have something to look back on and that somebody will be happy with them.”

Tyee began experimenting with tanning salmon skin with hemlock bark, a process that altered the color and made the skin more supple and leathery, Lohse said.

The online support and celebration surrounding Indigenous art and artists hasn’t been lost on Lohse.

“It’s so encouraging and inspiring and especially for my children to have that, I’m thankful, thankful for it and to see it happen,” she said. “I feel like I’m doing this for them and the health and well-being of us, together.”