History of the Princess May: A famous photograph, lighthouses and a whirlwind romance 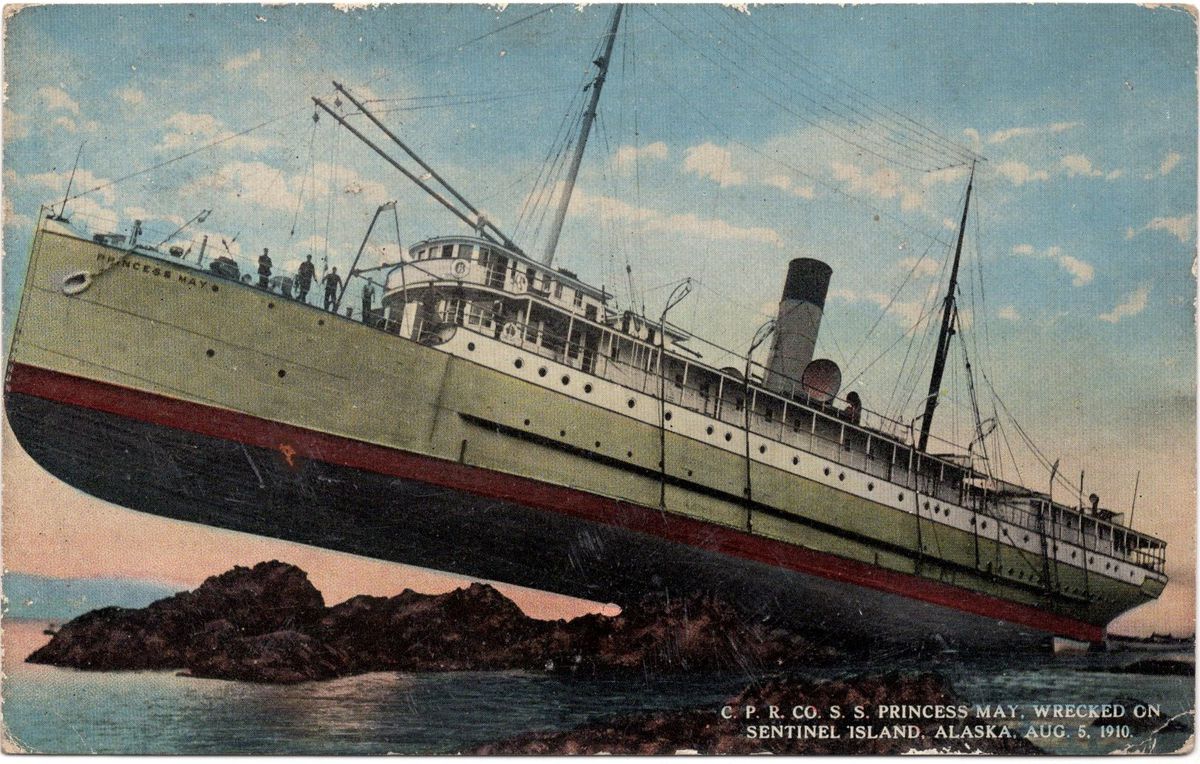 Part of a continuing weekly series on local history by historian David Reamer. Have a question about Anchorage history or an idea for a future article? Go to the form at the bottom of this story.

It was four in the morning of Aug. 5, 1910. The Princess May, a white painted Canadian Pacific Railway steamer, churned through the treacherous Lynn Canal at 12 knots. The 80 passengers, 68 crew members, and a cargo of gold and mail left Skagway at 9 p.m. the previous evening and were bound for Vancouver. Fog crept in over the still waters. The crewman at the wheel watched as Sentinel Island, its lighthouse visible, grew larger in view. Rocks suddenly appeared through the darkness. Though the pilot reacted quickly, it was already too late. The Princess May ground against the hidden reef before seizing to a stop, gaping wounds in its hull.

Later that day, the falling tide revealed the steamer caught upon its perch. The bow loomed upward at a 23-degree angle, jutting above the water. A photographer captured the striking, almost unreal image. The photograph circled the nation in newspapers, magazines, postcards and prints. The wreck of the Princess May soon became one of the most recognizable pictures in America. And though the incident occurred more than a century ago, many Alaskans might still be familiar with the image of a boat seemingly pointing toward the sky. However, the rest of the story is slightly less well known.

The 249-foot steamer first launched out of Hebburn, England, as the SS Cass in 1888. The Cass was built by Hawthorne, Leslie, and Company for the Formosa Trading Company. “Formosa” is an older term for what is now the Republic of China (Taiwan).

The ship traded up and down the Chinese coast from 1888 to 1901. It changed owners and names several times, from Cass to Arthur back to Cass to Ningchow to Hating. Along the way, the steamer was also the site of several colorful if poorly documented incidents, including a mutiny and pirate attack.

In early 1901, the newly organized Canadian Pacific Railway Coastal Service purchased the Hating for what would become their princess fleet, a collection of smaller ocean liners all with names beginning with Princess. The Hating thus became the Princess May, named after Mary of Teck, also known as Princess May of Teck, who became the Queen of England in 1910 alongside her husband, King George V.

By June, the steamer, advertised as “the most elaborately equipped ship on the run,” was on a regular schedule between Skagway and Vancouver, including through the highly trafficked Lynn Canal. It alternated with the first ship in the Canadian Pacific Railway’s fleet, the SS Islander.

Misleading name aside, the Lynn Canal is not an artificial canal but a fjord, the deepest in North America. But its narrow length is also strewn with ice, reefs and jagged rocks that ended the career of many ships. On Aug. 15, 1901, the Islander struck an iceberg in the waterway and sank. Casualty estimates varied wildly, but at least 40 individuals aboard died. Alaska’s deadliest maritime disaster also came in the Lynn Canal, just a few years later and involving another of the princess fleet. In 1918, the Princess Sophia struck the Vanderbilt Reef near Sentinel Island. Of the more than 350 passengers and crew, none survived.

The combination of perilous waterways and the increased traffic of the Klondike Gold Rush led to hundreds of accidents annually along the Inside Passage. In 1900, an inspector for the Thirteenth Lighthouse District toured the Alaska coast. His report recommended the construction of 11 lighthouses in Southeast Alaska. All were eventually built, beginning with the Sentinel Island and Five Fingers Lighthouses, which began operation on March 1, 1902.

Experience on the well-traveled inlet and the lighthouse safety measures made little to no difference for the Princess May. Captain John McLeod’s orders had the steamer running at 12 knots, about 14 miles per hour, at or near the steamer’s top speed. In his report, the on-duty pilot stated, “owing to the haze which hung over the water it was difficult to see far ahead, and the rocks were not visible until we were almost upon them and it was too late to avoid a disaster.”

The rocks off Sentinel Island ripped opened several gashes along the hull, as long as 50 feet. Water poured in, killing the engines. The hero of the day was the wireless operator, W. R. Keller. With the engines out, there was no power to the wireless. On the fly and amidst rapidly rising water, Keller swam into the engine room, nabbed a lamp battery, and jury-rigged a connection to power the wireless. His message, sent in Morse code, was suitably direct: “S.S. PRINCESS MAY SINKING SENTINEL ISLAND; SEND HELP.” The signal was heard as far away as St. Michael on the west coast of Alaska. Keller repeated the plea for as long as he could.

The Princess May sank within two hours. The passengers and crew, who had mostly been asleep, were hurriedly pressed along with their belongings into the lifeboats. The shipment of gold was, of course, also a priority for the captain. The small boats hugged the shore in the dark until the morning when they could safely land. Then, scantily clad and shivering, they made their way to the lighthouse, where they received aid and shelter. Thanks to Keller, no less than five vessels quickly arrived at the scene. The passengers were in Juneau by that evening. No mail, gold, or lives were lost.

The steamer remained fixed in its position, allowing Juneau-based photographer William H. Case (1868-1920) to take the famous picture. Born In Iowa, he made his way north as a prospector in 1898 before opening a photography studio in Skagway. As Skagway declined from its gold rush peak, Case relocated to Juneau, where he lived for the rest of his life.

Recovery attempts followed soon after the crash. Company officials summoned salvage expert W. H. Logan of Seattle. Despite an extended patch of calm weather, the process took longer than expected. After several failed attempts to wrench the Princess May free, it was finally separated from its rocky prison on September 3 and towed to port for repairs. The ship was running its regular route by the following summer, converted during the repairs from coal to oil fuel.

The sinking of the Princess May at least had a positive impact on Keller’s love life. By January 1911, he had received a marriage offer from a “very wealthy” Ohio woman who hoped to tour the country with him as a vaudeville act. He apparently declined the honor. In June 1911, he was working aboard another member of the princess fleet, the Princess Charlotte. There he met actress Cecile Hoagland, stage name Cecil Whitmore, then making a Pacific coast tour. Keller regaled her with tales of his heroism, and about 10 days later, they married.

The ceremony was conducted on the stage of the Vancouver theater where she was then performing. As they approached the Princess Charlotte the following morning for his last run as a wireless operator, the crew showered them with rice while the captain raised the flags in their honor. Keller accepted a temporary position in Vancouver with the company while Hoagland finished her scheduled performances on the coast.

The Princess May served in the princess fleet for another nine years. In 1917, the steamer narrowly escaped another disaster when it and another steamship, the Jefferson, collided off the coast of British Columbia. The Princess May escaped more or less unharmed while the Jefferson was severely damaged, though without any injury to those aboard. In 1919, the Canadian Pacific Railway sold the Princess May to a Caribbean-based company, where the ship relocated for the remainder of its active service. Though its end was inglorious, scrapped and scuttled off Jamaica in the early 1930s, the intriguing images remain. Vintage postcards and reproduction prints of the Princess May wreck are affordable and widely available online.