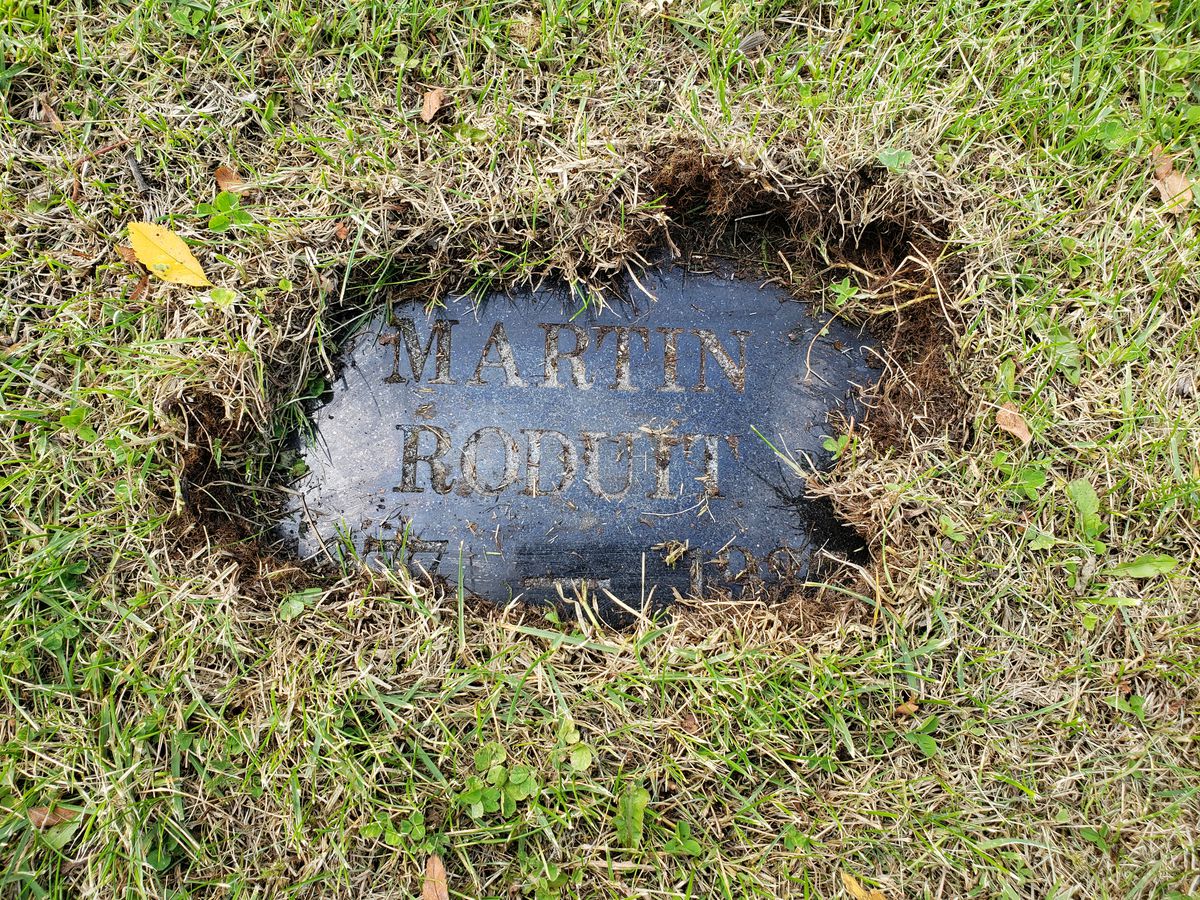 The tale of a 1910 shootout in Fairbanks provides a glimpse into the past, where after the apex of the “Wild West” we can yet find the spirit enduring in the rough Alaska boomtowns. This particular narrative includes an intoxicated Swiss miner, police, some unfortunate windows, and an opportunity to examine the historical context.

It was Wednesday evening, Sept. 28, 1910. Martin Roduit, a miner working a claim near Circle, made his way to Fairbanks. He spoke French, so the locals thought he was French, but he was, in fact, from Switzerland. In 1904, the French government paid for his passage west to care for a French garden exhibition at the 1904 St. Louis World’s Fair. He stayed and soon made his way to Alaska, where he prospected amid other odd jobs, including carrying the mail around Fairbanks.

Fairbanks lies within the ancestral lands of the Dena people of the lower Tanana River, and the town itself dates back to a trading post established by Elbridge Truman Barnette (1863-1933) in 1901. Barnette, his wife, and 130 tons of goods were loaded on a riverboat heading up the Tanana River. His goal was Tanana Crossing, now Tanacross. Instead, the boat hit shallow water and detoured onto the Chena River. Tired of risking his ship, the captain forced Barnette to disembark around the site of present-day Fairbanks. Barnette was furious, but with no other good options, decided to set up shop there. This anecdote is one of the most remarkable aspects of Fairbanks’ history. A change in any variable would have stranded Barnette elsewhere, meaning no Fairbanks in its current location, perhaps no recognizable Fairbanks at all.

On the evening in question, Roduit had a few drinks, then a few more, and quickly proceeded past the point of reasonable action. He was even-tempered when sober and deeply apologetic after any bender. In between, however, he was a mean drunk. Per the Fairbanks Alaska Citizen’s account of the evening, he drank so much that “he just reached the stage where he wanted to do up whoever did not look good to him.”

That year, 1910, fell within a relatively narrow window of time when alcohol was legal. The specifics changed from time to time, but in the main, alcohol was banned within Alaska from 1868 to 1899. There not being much of criminal justice system to pursue and punish offenders, the law was openly ignored, with bars opening by 1869 in Sitka. In 1899, the first official liquor licenses were issued, and a legitimate alcohol industry boomed. But by the 1910s, some towns began curtailing alcohol sales once more. Anchorage leadership, the railroad in other words, notably banned the sale and manufacture of liquor in 1915. And in 1918, the Alaska Bone Dry Act took effect, initiating a second prohibition that lasted into 1933.

The intoxicated Roduit ventured inside a saloon at the corner of Fifth Avenue and Cushman Street. There, he ran into a mining camp cook. Though the two were known friends, on this evening, the cook “did not look good” to Roduit. They argued, argued more strenuously, then Roduit knocked the cook down and threw a boiling-hot kettle at him. This is the point when the police showed up.

Fairbanks Police Chief L.P. Conway and his deputy, J.E. Chovin, were patrolling the town when they heard the commotion. They entered the saloon and separated the two brawlers. Briefly civil once more, Roduit offered the officers a drink. They declined. The cook began to list his grievances, which made Roduit attack him again. Chovin grabbed Roduit and shoved him out the door and tumbling to the ground in front of the saloon.

The officers followed. Roduit backpedaled, regained his footing, pulled out his gun, and turned toward the chief. “I have nothing against you, Conway,” he said, “but I am going to kill Chovin.” The deputy backed toward the saloon door. Conway pulled his gun as well, hiding it behind his back while trying to calm Roduit down. Undeterred, Roduit leveled his pistol at Chovin. Then, the “cannonading began.” Per the Alaska Citizen again, “It sounded like the best part of a Fourth of July celebration and a good big crowd was soon congregated. Most of them kept a respectful distance from the combatants but the erratic course of the bullets was something that rendered any kind of cover untenable.”

The existence of a crowd in 1910 is almost solely due to gold. In 1900, there were the Native inhabitants and a few scattered miners. Barnette established his trading post the following year, an ignominious log structure described by one new arrival as looking like a “disreputable pig sty.” In 1902, Italian miner Felice Pedroni (1858-1910), better known as Felix Pedro, struck gold a little to the north. The subsequent rush made the town, named that year after Indiana Sen. Charles Fairbanks. By the spring of 1903, there were an estimated 1,000 fortune seekers in camp. The population varied wildly, but in 1910 there were 3,500 residents according to the Census.

Conway fired twice at Roduit’s hand, attempting to disarm him. He missed. Roduit turned and fired twice at Conway. He missed. Roduit shot at Chovin and missed. Chovin shot repeatedly at Roduit and missed. Conway unloaded until empty, missing every time. The closest they came to hitting one another was a slug that “went through Roduit’s clothes, piercing the right sleeve and side of his coat” but missing his flesh entirely.

No one in the crowd was hit either, but there were victims. Several innocent window panes ascended to heaven, including a “valuable pane of glass at the Kellogg residence, up the hill at Ninth Street.” Another shot, aimed at Roduit’s legs from about 12 feet, ended up in the “top pane of glass of Harry Cribb’s emporium.”

It takes longer to describe a shooting than the action itself. Fifteen to 20 seconds after the first shot, Roduit spun and fled down Cushman. Conway, Chovin and a local who joined the pursuit since Conway was out of bullets, chased Roduit into a ditch. They grabbed him, beat him, and took him to jail. Roduit appeared in court looking “very much as if he had been through the mill, his head being bandaged and his face bruised.”

The amount of violence in the American West, of which Alaska in this period could be considered an extension, is a divisive issue among historians. In the 1920s, Vernon Parrington wrote of the post-Civil War American frontier, “All things were held cheap, and human life the cheapest of all.” By the 1970s, Ray Billington argued, “the ‘shootout’ glorified in ‘western’ stories and motion pictures was unheard of.” There is evidence for both arguments, and to this day, there are historians firmly ensconced on both sides of the intellectual fence. As Robert Dykstra wrote in 2009, “there is not yet a glimmer of consensus.”

Documentation being what it is, there are no crime statistics for 1910 Alaska. In his 1991 text, A Different Frontier: Alaska Criminal Justice, 1935-1965, K.S. Kynell found “Alaska’s territorial homicide rate considerably lower than the national rate.” And yet, Roduit’s rampage wasn’t front-page news in the Alaska Citizen, and the Fairbanks Daily News-Miner only covered the subsequent trial and sentencing.

By the time Roduit sobered up and appeared before the magistrate, he had unsurprisingly become a “very repentant young man.” He was sentenced to 18 months at the McNeil Island Penitentiary near Tacoma, Washington. He escaped more serious charges “due to the fact that his aim with that big gat he was packing was erratic in the extreme.” On the other hand, “That he is not reposing peacefully in the city lot at the cemetery is consequent on the fact that the police officers artillery was but little better trained.”

Roduit was released early, by December 1911 at the latest. By that time, he was back in Alaska. In the early 1930s, he settled down in Anchorage and returned to his gardening roots, pun intended. His love for flowers was well known, and it came as a local shock when he died in 1937 after a short illness. He is buried in the downtown Anchorage Memorial Cemetery.

Vandergraft, Doug. “A Guide to the Notorious Bars of Alaska. Anchorage”: Epicenter Press, 2014.