Harvest the crabapples in your yard for this delectable autumn appetizer 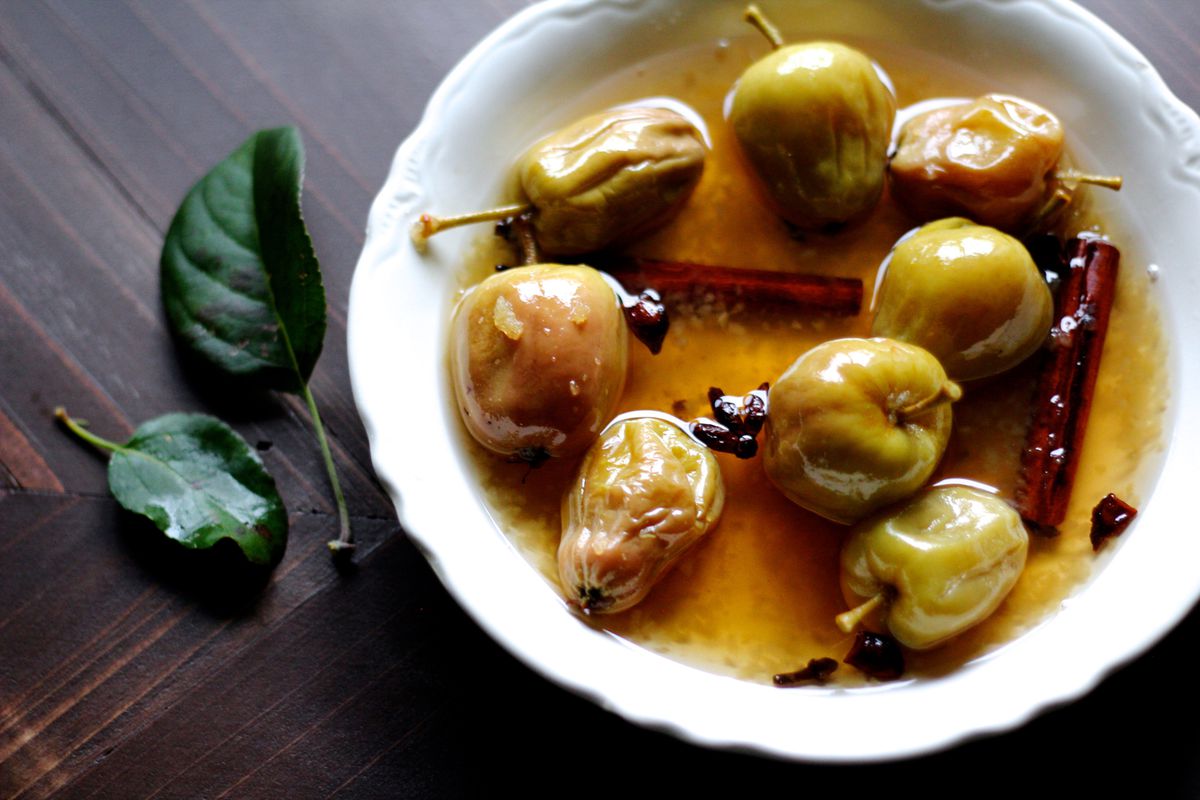 While nothing comparable to the recent hurricanes or the wildfires in other parts of the country, here on the Kenai Peninsula we had a wind storm that rumbled through earlier this week, bringing down trees in our neighborhood and knocking out power in several areas. On my way home from taking the kids to their bus stop, I surveyed the damage, watching our neighbor across the street make firewood out of his fallen tree. As I pulled into my driveway, I noticed that many of the apples in our front yard had blown off the bough and been tossed around. I grabbed a basket from the kitchen, ventured out into the rain and gathered them up.

I am particularly fond of our tiny apple tree. It sits right outside our living room window. In summer, it blooms abundantly in shades of white and pale pink. As we transition into fall, the fruit begins to emerge, first bright green, then later, blushes of red. The apple tree often attracts moose to the front yard. The whole family enjoys standing in the living room, watching them crunch away at the firm fruit.

While I have no idea what variety of apples they are as I am no expert in such things, I have always assumed that they are some kind of crabapples, given their tiny size, and sour, pulpy interior. However, they look a little bigger and a little less red and round than most crabapples I'm familiar with. If you're reading this and happen to know what kind of apples I have, by all means, send me an email and let me know.

When I brought the basket into the house, I rinsed the apples well and discarded the leaves and larger stems, leaving the smallest stems still attached. I then simmered the apples in a pot of white wine, sweetened with sugar and spiced with star anise, cinnamon sticks and whole cloves. It took about 10 minutes before the apples got so tender that the skins began to burst (I imagine it would take less time with the smaller type of crabapples).

You can grab the warm apples by the stem and nibble softened apple away, leaving the core behind. These would be a wonderful autumn appetizer served with soft cheese and crackers. Be sure to drizzle some of the spiced wine syrup over everything, because the apples will still be quite tart on the inside. I also strained the leftover syrup, then covered and refrigerated it to make some fall-inspired Champagne cocktails.

To a saucepan over medium heat, add the wine, sugar, star anise, cinnamon and cloves. Stir until the sugar dissolves and the mixture begins to simmer. Add the apples to the pot and cover, simmering 5-10 minutes or until tender and beginning to burst. Allow the apples to cool 5-7 minutes before serving in their syrup alongside soft cheese and crackers.

Recipe adapted from The Kitchn.