Sometimes the best Thanksgiving dinner is one you don’t cook 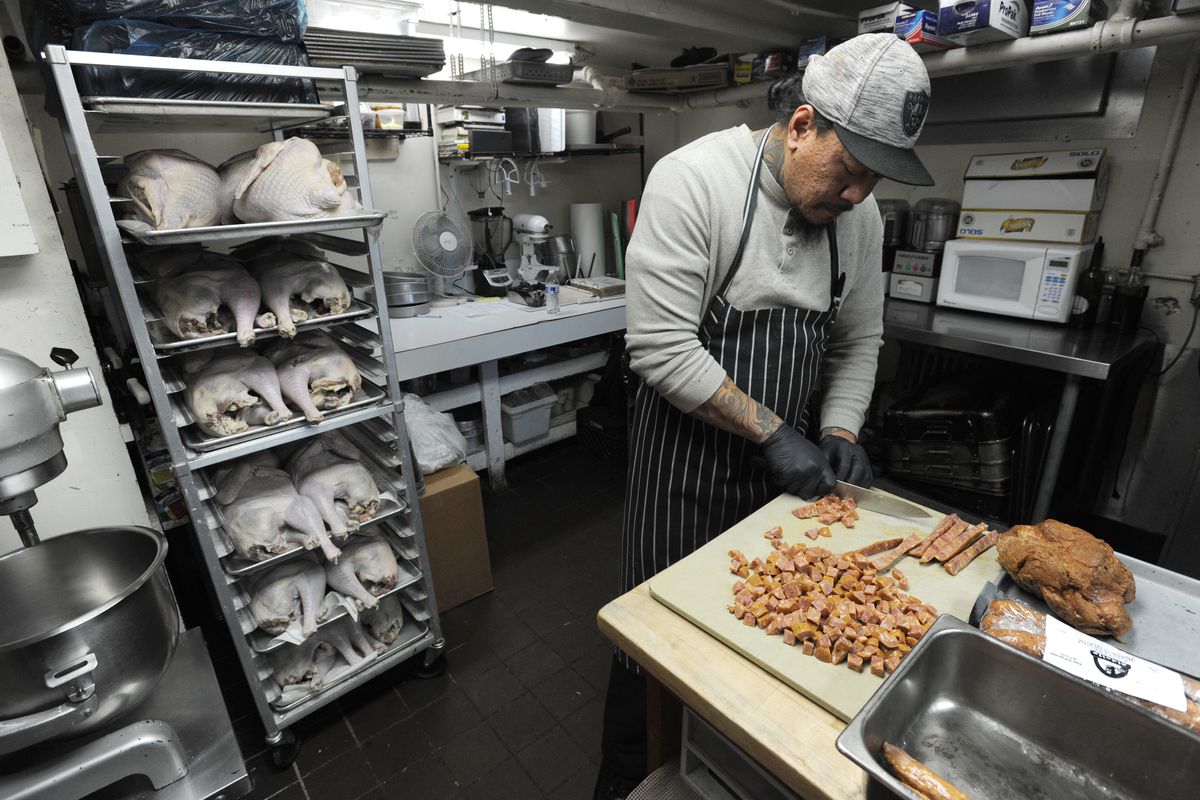 Here's a Thanksgiving secret a few of us planning dinner at home have right now: Sometimes the best holiday meal isn't one with grandma's stuffing or a overnight-brined organic turkey.

It's just one we don't have to cook.

Local chefs are paying attention. Though most grocery store delis offer all the pre-made components of Thanksgiving dinner, restaurant owners in Anchorage say there's a growing market for higher-end takeout meals that taste like home cooking or, in some cases, even fancier.

The Marx Bros. Cafe, a restaurant in downtown Anchorage, has been offering to-go Thanksgiving for more than 25 years. But recently, several other fine dining restaurants, including Simon & Seafort's and Suite 100 Restaurant, have gotten into the takeout game and say they have found plenty of takers.

"I really think that restaurants are just responding to the need. I think it's a change in our culture," said Garrett Martin, manager at Suite 100 in South Anchorage. "Not only are people just busier, people are leaning toward things that are more important to them. When you have less time spent prepping, you have more time for the good stuff."

[Want to go out to eat for Thanksgiving? Here are some restaurant options around Anchorage]

There was once a time when late November was slow in the Anchorage restaurant world, said Jack Amon, longtime partner and executive chef at Marx Bros. Interest in takeout Thanksgiving has grown with the increase in the number of families where two parents work, he said. When he was growing up, the women in his family stayed home and had more time to prep.

"Now you have two working spouses, kids in soccer, kids in hockey, kids in school," he said. "The poor mother, usually, has to spend all day in the kitchen and somebody has to go fight the crowds at the grocery stores."

An estimated 1,600 to 2,000 people will eat Thanksgiving takeout from Amon's restaurant Thursday. There is only so much time on Thanksgiving Day, and many customers feel like it's better spent out of the kitchen, Amon said.

"I got five kids, they go from age 13 to 3. We like to play games, we like to go outside and sled when there's snow," said Josh Pepperd, whose family has been getting dinner from Marx Bros. for 10 years. "The kids would much rather have us than have a certain from-scratch home dinner."

Marx Bros. dinner for eight to 10 people costs $250 and includes either a deep-fried turkey or one that's ready for the oven, stuffing, potatoes, yams, gravy and a pumpkin cheesecake.

"It all comes in a nice little box that we carry to your car," Amon said. "I take a lot of pride in them."

A similar meal with an organic turkey at Suite 100 costs $300. The restaurant is planning to do roughly 30 of them, Martin said.

"I think the price is reasonable for what it is," Martin said. "When I cook, especially when I cook recipes at home, once you buy everything, the cost is so compounded because you are buying more than you need for an actual dish."

Thanksgiving is now Simon & Seafort's busiest reservation night all year. Instead of turning people away from a fully booked dining room, they decided to extend takeout service a couple years ago, said Chris Hockett, front house manager. It will likely do 75 full meals this year for 10 to 12 people for $260 each.

Linnea Cummings owns Alaska Dinner Factory, a business that offers pre-assembled meals for delivery and takeout. For the last few years, she's done brisk business in ready-to-cook Thanksgivings. She'll do 45 dinners for 12 this year at $280 a piece. She's toned up her Thanksgiving offerings as she's learned more about the market. Thanksgiving menus are shaped as much by nostalgia as they are about what people actually like to eat, she explained.

"Each person has a traditional thing, the potluck item they bring," she said, talking about her own family table. "Whether we like it or not, we still eat it and we still miss it if it isn't there."

She's expanded her offerings to include more nostalgic dishes, she said. A version of green bean casserole, for example, is a runaway hit. She's working on something that might get at people's love of canned yams, she said.

One of Cummings' customers, Lynette Harple, started ordering Thanksgiving a few years ago, when she found herself working and caring for her mother and her husband, who were both ill. The dinner included turkey, green bean casserole, potatoes and several "to die for" miniature pumpkin pies, she recalled. It met everyone's desire for a festive meal, she said, and shrank her list of responsibilities.

"It comes ready to go and it comes with explicit directions," Harple said. "I just don't have time to cook a ton of stuff because I gotta work, you know?"